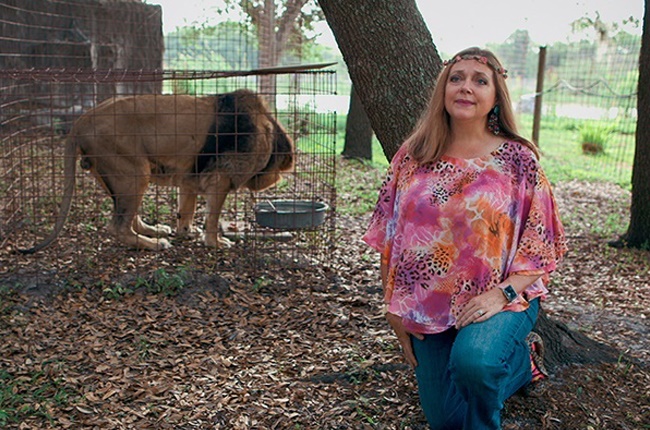 With over 60 million views on YouTube, Cardi B's new track, WAP, which features Megan Thee Stallion, seems to be a favourite among fans.

But there's one person who's not so happy with the video -- Carole Baskin.

While the cat-lover says it's obvious that the tigers and leopards featured in Cardi's new video were photoshopped into the scene, she's still concerned about how the shots of the animals were acquired.

In a statement to Billboard, Carole said: "It didn't look like the cats were really in the rooms with the singers. In fact, probably most of the rooms were Photoshopped in via green screen."

She added: "That being said, you have to pose a wildcat in front of a green screen to get that image and that doesn't happen in the wild."

The Tiger King star believes that in order to feature the cats, the crew behind Cardi's video must have "dealt with one of the big cat pimps", referring to people who use horrific methods, such as shock treatment, to train wild animals for use on camera.

"The worst part is that it glamorises the idea of rich people having tigers as pets [sic]," she went on to say.

ALSO READ | Tiger King's Rick Kirkham tells us about life with Joe Exotic: 'Joe was much more evil and even crazier'

Carole also spoke about what life for the big cats are like when they become "too old for pay to play sessions by people like Joe Exotic, Bhagavan Antle, Marc McCarthy, Mario Tabraue and others", saying that the animals are either "destroyed behind closed gates", given away to people as pets or sent to breeding mills.

If you have not seen it, watch the WAP music video here (NSFW: This video contains explicit content)

We live in a world where facts and fiction get blurred
In times of uncertainty you need journalism you can trust. For 14 free days, you can have access to a world of in-depth analyses, investigative journalism, top opinions and a range of features. Journalism strengthens democracy. Invest in the future today. Thereafter you will be billed R75 per month. You can cancel anytime and if you cancel within 14 days you won't be billed.
Subscribe to News24
Related Links
LISTEN: The singer behind Joe Exotic's songs released another track about Carole Baskin
Sheriff confirms Carole Baskin's missing husband's will was a forgery
Joe Exotic's husband Dillon Passage parties on a boat with Too Hot to Handle's Bryce, Harry, and...
Next on Life
The Weeknd teases music for Avatar: The Way of Water