Johannesburg- TV mogul Basetsana Kumalo, along with the rest of Mzansi is brimming with pride over Trevor Noah.

The funny man was in the country for the first time since taking over the helm as The Daily Show host in September.

Trevor's Nationwild Tour is one of the headliners at the Comedy Central International Comedy Festival, which kicked off last Wednesday. (Read more on that here)

Comedy lovers and fans have been flocking to the festival to see Trevor in action.

And, among them was Bassie, who hung out with him recently.

Bassie could not contain how proud she is of Trevor, and applauded him for not losing his "nuanced understanding of Mzansi."

She also told Trevor to go show the Americans how we roll. Viva!

How was your Saturday,well mine ended with hanging out with my boy @trevornoah. So proud of you....you knocked it right out of the park! Your nuanced understanding of Mzansi has never left your DNA! We love you....go and show the American's how we roll! 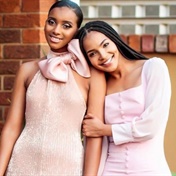