Timeline: SA's 6 beauty queens that have taken home the crown at the two biggest pageants 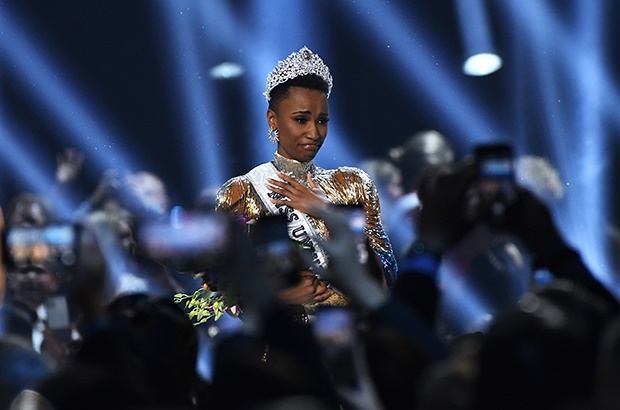 The Public Relations graduate said when she took the title, "It actually hasn't sunk in at the moment, I think I'll believe it first thing tomorrow morning." Zozibini said, "You want to do good but then when it actually happens you come crashing, and it's overwhelming, but it's beautiful overwhelming."

Talking about her reign and her plans, she said, "I wanted to live a more purposeful life because I felt like I wasn't doing anything influential or great with my life. So with this title, I really am hoping to touch lives and just exist in a space where I can make change."

With the Miss Universe crown on her head, we can't wait to see the places she'll go. Speaking at the pageant on Sunday, 8 August, Zozibini said, "I grew up in a world where a woman who looks like me with my kind of skin and my kind of hair was never considered to be beautiful. And I think that it's time that that stops today. I want children to look at me and see my face, and I want them to see their faces reflected in mine."

The Business Management graduate's biggest motivation is her half-sister who had a disability but tragically died earlier this year. Demi went on to do some incredible things, including launching a programme to train women in self-defence after her hijacking in Johannesburg.

"I want women to be treated as equals in every part of the world," she said, according to the Miss Universe site. "We are making great strides, but there is still so much to be done."

Speaking about making a difference, she said, "I learned to take responsibility for my future at a young age. I realized that the only person standing between me and my dreams is me, and with hard work, focus and a lot of dedication, I can become whoever and whatever I want to become." Rolene Strauss was crowned Miss South Africa before taking the title of Miss World in 2014.

A medical student at the time, the then 22-year-old spoke about winning the title for South Africa when the country was celebrating 20 years of democracy. "It's not me who won it's South Africa who won," she said.

"I stood there as Miss South, not as Rolene Strauss, and that paid a huge deal in me winning. We're an example for the rest of the world, showing them that unity and forgiveness and a bright future lies ahead of us. I think that was a great reason why I won. That's why I felt so calm because I knew that not only did I have a story to tell but mu country has a story to tell."

Rolene is currently married to D'Niel Strauss, and the couple is expecting their second child. Margaret Gardiner was the first South African to take the Miss Universe crown in 1978 when she was just 18 years old.

Margaret moved to the US when she began her reign and has since travelled the world, graduated with a BA in Psychology and started working in the entertainment industry as a TV and print journalist and a member of the Hollywood Foreign Press Association that votes on and hosts the prestigious Golden Globes.

Earlier this year, she spoke to The Juice's Graye Morkel about what she misses most about home. "Who wouldn't miss "biltong", "droëwors", and "Cadbury Crunchies"? "Boerekos, curries, oysters, crayfish and prawns. Like only South Africans can make it. "The list is never-ending," she said. Helen stepped down after the increasingly negative media coverage following her win focused on her being an unmarried mother with an 18-month-old son.

Anneline went on to have an illustrious life as a model and actress and is currently living with her husband in Mauritius. Penelope Anne Coelen was the first-ever Miss South Africa to go on to win the title of Miss World.

At 18 years old, the secretary from Durban gained international notoriety after the competition. Though she didn't make it as an actress in Hollywood as she initially intended, she started her own clothing and beauty product lines.

At the time of her crowning, she said, "It's just wonderful. Just think I was only Miss South Africa yesterday. Now I'm Miss World. And I feel on top of the world."

The Miss World 2019 pageant will take place on 14 December. Local viewers can watch the show on SABC 3 on 14 December between 15:00 and 18:00 to see Sasha-Lee Olivier represent South Africa. We live in a world where facts and fiction get blurred
In times of uncertainty you need journalism you can trust. For only R75 per month, you have access to a world of in-depth analyses, investigative journalism, top opinions and a range of features. Journalism strengthens democracy. Invest in the future today.
Subscribe to News24
Related Links
WATCH: Demi-Leigh's message to Zozibini Tunzi: 'We did it again!'
WATCH: Relive Zozibini Tunzi's Miss Universe crowning moment
From SA to the Philippines and back home again: The beautiful Miss Universe crowning story
Next on Channel24
Former Miss Iraq calls out Mandla Mandela's appeal for African countries to withdraw from Miss Universe