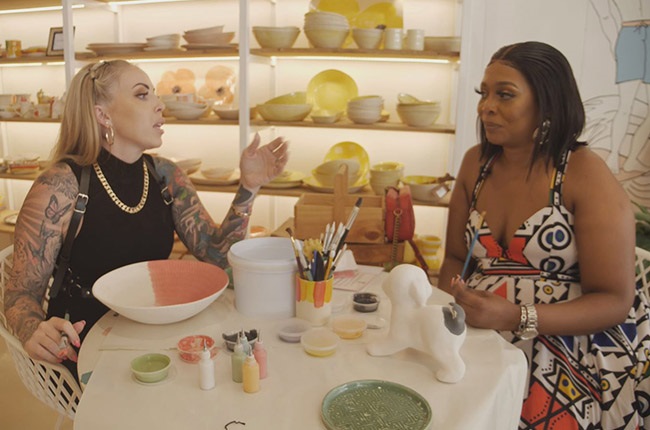 Jojo and Mabusi in The Insider SA.
Photo supplied

The pair recently met up to clear the air, which was documented by The Insider SA. The episode will air on Monday night at 17:30 on SABC3 with a repeat on Saturday, 28 May at 13:00.

Mabusi and Jojo visited The Pottery, at Ballito Lifestyle Centre where they got creative and spoke about their friendship.

"We've had a rollercoaster ride of a friendship. We've had our ups and downs but at the end of the day, we've always managed to come back together," said Jojo.

The pair butted heads on a few occasions throughout the show's second season. However, the battle lines were drawn after the two asked each other questions in a game that was supposed to be anonymous during a trip to Namibithi Hills Private Game Lodge.

Mabusi asked Jojo how she felt being married to an "old" man, while Jojo asked Mabusi if all of her designer bags were genuine.

The tension between the two ladies reached a climax when a conversation got heated during their last getaway to Sun City – Jojo told Mabusi to shut up and subsequently threw water on her.

We live in a world where facts and fiction get blurred
In times of uncertainty you need journalism you can trust. For 14 free days, you can have access to a world of in-depth analyses, investigative journalism, top opinions and a range of features. Journalism strengthens democracy. Invest in the future today. Thereafter you will be billed R75 per month. You can cancel anytime and if you cancel within 14 days you won't be billed.
Subscribe to News24
Next on Channel24
Linda Mtoba's top three tips for attending the Durban July