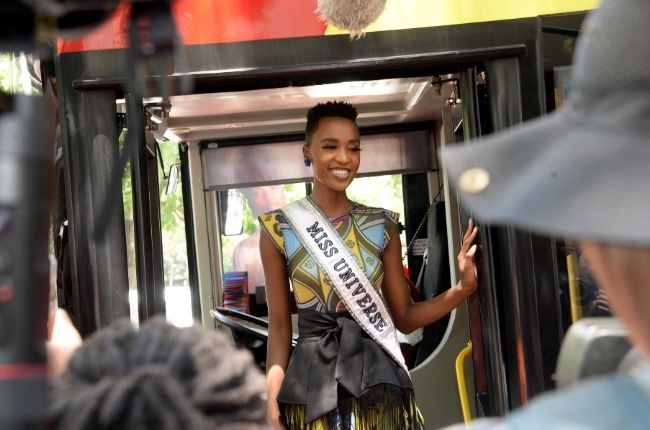 We take a look at the top three entertainment news headlines that shaped social media opinions so far this year.

But how did these trending topics impact South Africa on social media?

With the second half of the year underway, here are some insights into 2020's top trending entertainment topics (so far), with data gathered by Meltwater from 1 January to 30 June.

In February, Miss Universe 2019 Zozibini Tunzi returned home for the first time after being crowned Miss Universe in Atlanta in December 2019.

ALSO READ | WATCH: We Zoom with Zozi from her New York apartment

Ahead of her arrival, Zozibini told Channel24 that she couldn't wait to "feel the energy" when she landed. "This win hasn't just been about me; I share it with South Africans," she said. And, boy oh boy, did her arrival exceed her every expectation!

She celebrated her triumphant return with a week-long homecoming tour, which stretched from Tsolo in the Eastern Cape to the Mother City.

Addressing the crowds at the airport moments after arriving in Johannesburg, Zozi thanked South Africans for their overwhelming support.

And not only did thousands of well-wishers line the streets to welcome Zozi back on home soil between January and 30 June, the hashtag #ZoziComesHome was mentioned more than 17 000 times on social media globally.

South Africa dominated the online conversations, with 62.13% of social media mentions coming from South Africa. The US came in second and Malaysia rounded up the top 3 countries which engaged with the hashtag.

In February alone, the "#ZoziComesHome" hashtag had a total reach of 382 million people globally. Following Zozibini's success at Miss Universe 2019, there was much excitement around this year's Miss South Africa pageant, especially with the organisation moving ahead with the competition, despite coronavirus concerns.

The "#MissSA2020" hashtag has already been mentioned over 62 000 times on social media this year, with mentions only picking up in May when entries opened.

Twitter was the number one social media platform that engaged with the hashtag. On 20 May, the #MissSA2020 hashtag had a social reach of 55 million people on Twitter when offensive tweets from Miss South Africa hopeful Bianca Schoombee, dating back to 2013, resurfaced.

Due to the unsavoury incident, the hashtag, "#BiancaMustFall" emerged, as angered online users called for her entry not to be considered.

The hashtag "#MissSA2020" trended once again when the organisation announced its top 15 semi-finalists on 24 June. The hashtag had a social reach of 26 million people and received an overall positive response from the South African public - scoring 68% for positive sentiment, with the announcement of the semi-finalists.

Some of the semi-finalists who have been receiving positive responses and support are Thato Mosehle, Shudufhadzo Masida, Palesa Keswa and Karishma Ramdev. 3. The death of Kobe Bryant

People around the world were shocked by news of Kobe Bryant and his daughter Gianna's deaths on 26 January.

The former NBA player was on his way to a youth basketball game with his daughter when their helicopter crashed, reported ESPN. The accident n Calabasas, California, claimed nine lives.

On social media, "Kobe Bryant" was mentioned four million times in relation to his "death" and helicopter "crash." In South Africa, social media mentions of Kobe this year have been over 26 000.

Throughout this year, South Africa online users have consistently mentioned "Kobe Bryant" on social media, particularly on Twitter, with mentions on "Kobe Bryant" during the last week of January 2020 having a social reach of 120 million people.

We live in a world where facts and fiction get blurred
In times of uncertainty you need journalism you can trust. For only R75 per month, you have access to a world of in-depth analyses, investigative journalism, top opinions and a range of features. Journalism strengthens democracy. Invest in the future today.
Subscribe to News24
Related Links
2020 Sama awards split into 5 episodes as the show goes virtual
CapeTalk welcomes Lester Kiewit as the new host of The Midday Report
Former Popstars winner makes music comeback after 10 years
Next on Channel24
Boity addresses Anton Jeftha dating rumours in trending YouTube video: 'I'm single'