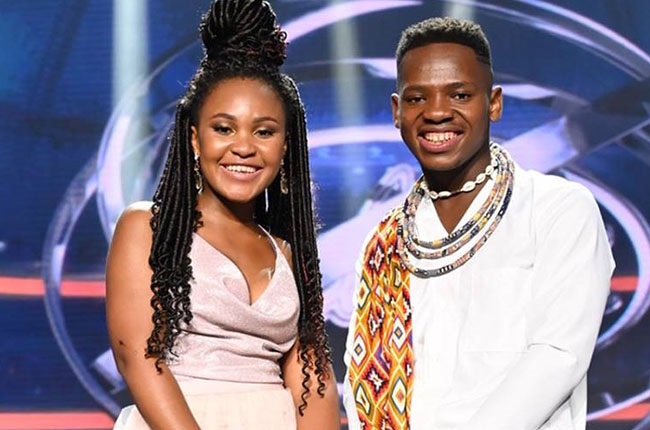 It was an emotional evening on the Idols SA stage as Zama and Mr Music advanced to the grand finale of this year's season of the competition with 22-million fans casting their votes to decide who will win a recording contract with Kalawa Jazmee next week.

Sadly, Brandon was voted out of the competition after he could not garner enough votes to remain in contention.

With Brandon now having bowed out of the competition, it is now up to the voters to decide between Mr Music and Zama – and their performances did not make this choice any easier, with both Idols SA hopefuls having saved their best for this very important evening.

The 21-year-old kicked off the night with his afro-pop single, Ngikhethe Kahle.

Randall remarked how different the first attempt sounded to this performance, yet he remained at the centre of it all.

"Tonight, you are right there, and you are owning the song, and you have to keep that in mind that the person who was singing this song at his first audition, hoping for the judges to choose him and hoping for votes is the same person standing here in the top two," he said.

At the same time, Unathi commented that South Africa loved him because he had given the best version of himself throughout the show. Somizi too loved the performance, repeating that if there was anyone who would make a fantastic finalist, it was Mr Music.

His second performance - his favourite of the show - was Sun-EL Musician and Ami Faku's Into Ingawe, which had Somizi giving him his ultimate nod, the "whoo shem".

"You look like the Afro-pop prince you are," he said, while Randall and Unathi said his endearing qualities, singing ability and desire to win would ensure that fans would vote for him to the very end.

Zama performed for her first top two offering the song she sang for her final theatre week audition, Without You by Mariah Carey.

"We fell in love with you the moment we met you," Unathi said, while Somizi said he was sad that the song had ended. "I can't get enough of your voice," he added.

Randall took the opportunity to offer a word of advice. "Your singing is very good, but you need to imbue that performance with emotion and absolutely let go," he said.

On her second performance, her favourite A Change is Gonna Come by Jennifer Hudson, Randall said he had nothing to say but that next week's competition was going to be a humdinger.

Unathi was reduced to joyful giggles at the performance, thanking her for giving her best.

Somizi too was beside himself with joy, saying "When you sleep tonight, you can do so knowing that whatever happens, you did it all. You killed it. You have given it your all – that was amazing! You deserve a standing ovation!"

Next week South Africa will find out who is the grand winner. South Africa's 16th Idol will become an instant millionaire, and win among other great prizes, Samsung products to the value of R150 000, the all-new Toyota Starlet 1.4. XR Manual, and a recording deal from Kalawa Jazmee.

"The Idols SA finale will treat viewers to a spectacular evening filled with great performances from big name artists and the big reveal – the winner of this year's competition. We are also excited for our partnership with Kalawa Jazmee, and the winner will get to work with the best in the business," said Nomsa Philiso, Director of Local Entertainment Channel at M-Net.