The first three episodes of the long-awaited fourth season of The Handmaid’s Tale has dropped on Showmax with episodes 4-10 coming weekly, express from the US.

The critically acclaimed dystopian drama is based on the celebrated 1985 novel by Margaret Atwood, which won the first-ever Arthur C. Clarke Award, selling over eight million copies and topping the bestseller lists again in 2017, when the TV adaptation debuted in the aftermath of the Trump election.

The series has won 75 awards to date, including 12 Emmys and Golden Globes for Best Drama Series, and Best Actress for its star, Elisabeth Moss. It holds an 8.4/10 score on IMDb and an average critics rating of 80% on Rotten Tomatoes.

The Wrap calls The Handmaid’s Tale "a transcendent cultural phenomenon"; IndieWire says the fourth season "returns with a roar"; and Collider says, "Those who have seen the previous three seasons and choose to come back for more, brace yourselves, because you can still expect this show to dig into the darkness, as much as ever. But you might be shocked as well, to also feel something rare and precious and new: Hope."

Joseph Fiennes and Yvonne Strahovski are back in their Emmy-nominated roles as Fred Waterford and Serena Joy, as are Ann Dowd, Alexis Bledel, Bradley Whitford and Samira Wiley in their Emmy-winning roles as Aunt Lydia, Emily, Commander Lawrence, and Moira, respectively. Rising child star and Critics’ Choice nominee Mckenna Grace (The Haunting of Hill House, Troop Zero, I, Tonya) joins the cast this season as the teenage wife of a much older commander.

But as amazing as the entire cast is, there’s no denying that Moss remains the central star. Here are 11 things that will make you love her even more. 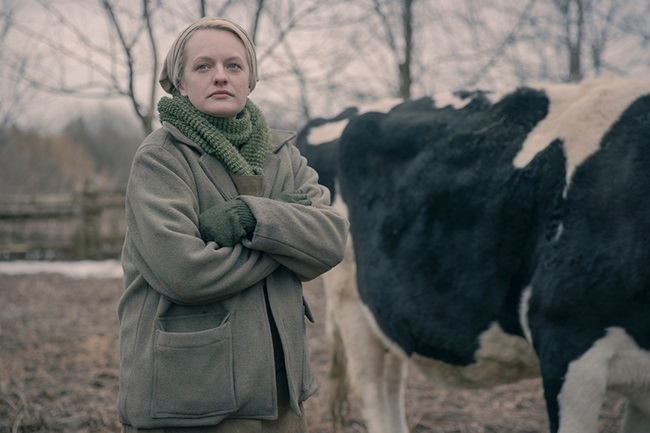 On the run after the end of season 3, an injured June and the fugitive Handmaids find refuge at a farm. (Photo: Jasper Savage/Hulu)

After debuting in the Sandra Bullock mini-series Lucky Chances at age eight, Moss came to fame as first daughter Zoey Bartlet in The West Wing, opposite Martin Sheen. By the time she took on her iconic roles as Peggy Olson in Mad Men and Robin Griffin in Top of the Lake, her television CV was so extensive that Vulture dubbed her the "Queen of Peak TV”. She’s now won 33 awards, including two Golden Globes and an Emmy.

Moss also stars in three excellent movies you can catch on Showmax now: psychological thriller The Invisible Man, for which she won a Critics Choice Super award earlier this year; the post-apocalyptic drama Light of My Life, with Casey Affleck and Anna Pniowsky; and Jordan Peele’s award-winning horror, Us, alongside Lupita Nyong'o.

2. Her character in The Handmaid’s Tale is on the run this season

June is on the run this season. Staying in Gilead has always been about rescuing her daughter, Hannah. But this is bigger. This is about all the daughters of Gilead. And now, it’s war.

"Everything June’s been told was impossible is still very possible, and she’s just proven that again by doing this thing that is hitting Gilead exactly where they hurt," series creator Bruce Miller told The Hollywood Reporter. "I don’t think she has much hope that she's going to get out alive. I think she's more there to fuck up Gilead."

3. She’s been a producer on The Handmaid’s Tale since Season 1

The role of June in The Handmaid’s Tale marked the first time Moss had been directly offered a part (she’s auditioned for every role she’d done up to that point), and she was thrilled at the prospect. Even so, she had a condition: she’d only sign a standard five-to-seven-year series contract if she could also be a hands-on producer.

"I couldn’t sign on to something that was such a time commitment and not have a creative say in it, at this point in my career," she told Vulture. "I’ve been doing this for 28 years. I don’t know everything, but I kind of know something about how to do this." She’s been directly involved in everything from the tone of the show and cinematographic choices to casting, and even "the exact shade of red to make the handmaids’ uniform."

When Vulture asked Fiennes what Moss was like to hang out with off set, he laughed, "Do you know what her timetable is like? She’s in every scene, probably up at four in the morning. She’s first in, last out, learning scripts over the weekend and probably doing huge amounts of voice-over in a studio when all of us are having our Sundays off, and then putting on her producer hat and spending her lunch break in meetings and watching dailies. I feel shattered and ashamed thinking about her extraordinary work ethic."

4. She directs three episodes this season

Moss makes her directorial debut with episodes 3, 8 and 9 of The Handmaid’s Tale S4.

"Elisabeth Moss, if she wants, will become one of the great directors," Fiennes believes. "Her ability to direct The Handmaid’s Tale is extraordinary, because she is an extraordinary actress and her depth and knowledge of the story is unparalleled. Elisabeth’s acute awareness, her instincts as an actor, her ability to communicate, her sense of truth, her love of actors, and her brilliant cinematic eye make her a dynamic, powerful, and exciting voice as a director. I have had several filming days with Elisabeth, and she is absolute gold to be directed by. I have genuinely loved it. You feel like you are in safe hands because she knows everything inside and out, which elevates our game. We are very lucky."

5. Like June, she wants to change society for the better

Moss is a vocal supporter of planned parenthood and an advocate for equal pay. When Vulture asked her when she felt she’d become a feminist, she said, "I was born. I was born, and then I was a feminist."

"There’s this whole feeling that women should be small and quiet and polite, and I don’t think that’s really gotten us anywhere," she says. She believes feminism means accepting every woman’s "right to live the life she wants to live."

Along with Moss, the cast of The Handmaid’s Tale was outspoken in advocating for reproductive rights during the Trump presidency, and even jointly filmed a PSA for Planned Parenthood. Across the world, many protest groups have also adopted the handmaids’ uniform in their campaigns. 6. She’s related to Björn from ABBA

Moss is a second cousin, once removed, of Swedish musician Björn Ulvaeus, of ABBA.

That’s not her only musical link either: her mother, Linda, is a professional jazz and blues harmonica player. Moss brought her mom to the Emmys in 2017, when she won her first Emmy for The Handmaid’s Tale. In her speech, she thanked her mom, saying, "You are brave and strong and smart and you have taught me that you can be kind and a fucking badass," which of course got bleeped.

On The Late Late Show with James Corden, Moss revealed that she hadn’t watched Gilmore Girls before working with her friend Alexis Bledel (aka Rory Gilmore) on The Handmaid’s Tale, but began bingeing the hit series between seasons 1 and 2 of Handmaid’s, as a kind of "palate cleanser".

8. She knows how to shop

Moss makes a point of buying jewellery for herself. "This sounds so potentially lame," she told Vulture, "but January Jones taught me this: to buy jewellery for yourself. That way it’s never like, 'Oh, a man got me this so I can’t wear it now that we’ve broken up.'"

One of her favourite pieces, she revealed, is a necklace her assistant gifted her, that bears the words, "Nolite te bastardes carborundorum", a classic Handmaid’s Tale quote that means, "Don’t let the bastards grind you down."

In an interview on The Late Late Show with James Corden, Melissa McCarthy, her co-star in The Kitchen, revealed that she and Moss first bonded over her addiction to online shopping, when she asked for Moss’s opinion on a life-sized fibreglass horse for her garden. "She’s a great enabler," McCarthy laughs.

9. She was married to Fred Armisen

You might be forgiven for thinking Moss is a tad serious, given her best known roles – even Melissa McCarthy has admitted to being intimidated by her before they met. But her taste in men seems to lean more towards the comedic. She used to be married to multiple Emmy-nominated comedian, producer and musician Fred Armisen (Saturday Night Live, Anchorman, Portlandia, Documentary Now!). The marriage lasted less than a year, and Armisen later admitted, “I think I was a terrible husband.”

10. Next up: The Shining Girls, based on the thriller by South African author Lauren Beukes

Reel Chicago reported last month that filming is about to commence on Apple TV+’s metaphysical thriller series The Shining Girls, based on the best-selling novel by South African Arthur C. Clarke Award winner Lauren Beukes. Moss will star (and executive produce via her production company, Love & Squalor Pictures) opposite Golden Globe-nominated Narcos star Wagner Moura. The series is being produced by Leonardo DiCaprio’s company Appian Way, with Beukes among the exec producers.

In December 2020, The Handmaid’s Tale was renewed for a fifth season, while a sequel series is also in development, based on Atwood’s 2019 follow-up novel, The Testaments, which was the joint winner of the 2019 Booker Prize and voted Best Fiction novel in the Goodreads Choice Awards 2019.

Binge the first three episodes of The Handmaid’s Tale S4 on Showmax, with episodes 4-10 coming weekly, express from the US. After all, as Vulture aptly puts it, "Frankly, a dystopia that isn’t ours sounds nice right about now."

Watch The Handmaid’s Tale on Showmax.

We live in a world where facts and fiction get blurred
In times of uncertainty you need journalism you can trust. For only R75 per month, you have access to a world of in-depth analyses, investigative journalism, top opinions and a range of features. Journalism strengthens democracy. Invest in the future today.
Subscribe to News24
Next on Channel24
Grey's Anatomy and Station 19 both get another season