If you're like us, we're just not ready to let go of Love is Blind.

The Netflix social experiment in which couples find out if love really is blind concluded with a somewhat lukewarm reunion episode.

Amber and Barnett and Cameron and Lauren are still happily married after almost two years. Giannina and Damian are in a relationship, Kenny is dating someone, and the rest are all still single.

We discovered some fascinating behind-the-scenes facts about a love triangle, two other couples that got engaged and an off-screen girlfriend – here are seven things that you probably didn't know about the show:

1. YOU WON'T BELIEVE HOW BIG THE CAST WAS

While we only got to know five of the couples, there were initially 40-50 contestants. Creator of the show, Chris Coelen told E! News that over the course of the ten-day filming period some singles were cut.

"There was a certain point where we did a whittling down of people just to focus internally on the people who were really connecting, to allow them more time."

The couples started with a speed dating exercise that lasted from eight to ten minutes. As people got to know each other better, they spent more time in the pods.

Chris told Variety that the longest date was probably four to five hours!

"That's probably the longest because they would have to take breaks and use the bathroom. But then they'd come back, and they'd get it, they get in the pod with each other multiple times a day."

While in the pods the couples could have activity dates like eating dinner together, painting, or playing games.

In an interview with AV Club, he said they encouraged contestants to be creative. (GETTING TO KNOW EACH OTHER: The pods where love begins. Photo: Netflix)

3. THE CONTESTANTS DIDN'T APPLY TO BE ON THE SHOW

Unlike other dating shows, the contestants didn't apply to be on Love is Blind.

Chris shared with Variety that they were cast and that there really wasn't any criteria beyond them wanting to find love for real.

4. THE CONTESTANTS DIDN'T SLEEP IN THE HOUSE

So remember that house the contestants were in during the pod dates? Well, it turns out they didn't sleep there.

In an interview with Refinery29, Kenny revealed that they slept in trailers.

"We slept in trailers, and they were correctional facility beds. The design was to just strip us down from our comfort level." 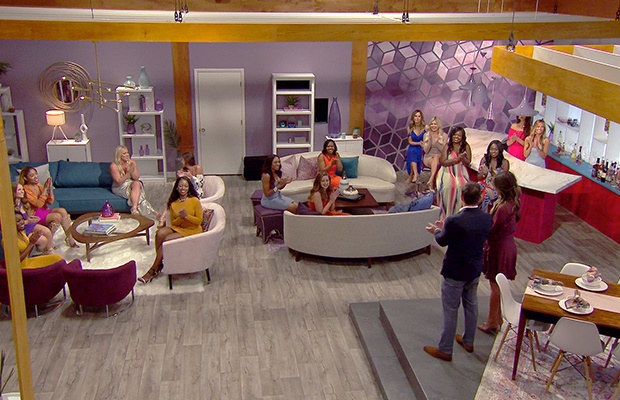 (JUST FOR SHOW? The 'Love is Blind' house. Photo: Netflix)

5. TWO OTHER COUPLES GOT ENGAGED

In total, eight couples got engaged, but the production only budgeted for a maximum of five couples, so the other two were cut.

A representative for the show told People Magazine that they "didn't anticipate such success" and that they "picked names out of a hat".

Couple 1: Westley Baer and Lexie Skipper. After their time on the show, the pair reconnected. In an interview with the publication, Westley said they stayed over at each other's houses and that he even met Leslie's parents over FaceTime. Three months later he moved to Asia, and the pair lost touch. When he returned, Leslie moved to New York.

What's the status of their relationship now?

"We literally live in apartment buildings next to each other, we're not seeing each other romantically," he told the publication.

Couple 2: Rory Newbrough and Danielle Drouin. Viewers will remember Rory as the guy who gave the rest of his castmates advice. When the couple learned that they would not be going on the Mexican baecation, they bought tickets to Miami where they spent a week getting to know each other better.

But when they returned to Atlanta after their time together, Danielle revealed that she still had feelings for another castmate.

Chris confirmed this in an interview with Entertainment Weekly.

"She [Danielle] ended up dating the guy who appears at the very beginning of the show, Matt Thomas, a 28-year-old director of Brawl for a Cause."

But the pair have since split according to People Magazine.

If there is one person we all had sympathy for on the show it was Mark Cuevas who fell in love with Jessica Batten. Everyone saw that Jessica wasn't that into him, except Mark.

Rumours started swirling that the personal trainer had a girlfriend while the show was being filmed.

During an interview on the Be There in Five podcast, Mark addressed the rumours.

"I did not have a girlfriend the whole time. I was single. Now, being a single man, you're single, you're doing your thing. I'd never had a girlfriend before. Where was the time to be in a relationship during the experience?" said Mark.

7. THE MARRIAGES ARE REAL

TMZ reports that the two couples are legally married and there are documents to prove it.

Atlanta's Fulton County Court disclosed that they have records showing that Barnett and Amber got married on 12 November 2018 and Lauren and Cameron tied the know on 18 November 2018.

Lauren also confirmed her marriage in an interview with Refinery29.

"That's the part that was so scary for me. This is a real, legally binding marriage. This is not for TV. This is our life."

Cameron added that he framed the marriage license and put it up in his office.

As for Barnett and Amber, their marriage is so real, they didn't even sign a prenup.

READ MORE: We did a deep dive: Here's where the 'Love is Blind' couples are two years after the show

We live in a world where facts and fiction get blurred
In times of uncertainty you need journalism you can trust. For only R75 per month, you have access to a world of in-depth analyses, investigative journalism, top opinions and a range of features. Journalism strengthens democracy. Invest in the future today.
Subscribe to News24
Related Links
We did a deep dive: Here's where the 'Love is Blind' couples are two years after the show
A 'Love is Blind' reunion episode is coming!
Love is Blind
Next on Channel24
Big Brother Mzansi contestant exits house after 48 hours due to 'personal reasons'