A second season for ‘Tiger King’? Here are all the questions we need answers to if that happens Tiger King – it's the Netflix docuseries that has everyone talking right now.

The show follows the life of eccentric roadside zoo owner Joe Shreibvogel, known as "Joe Exotic", and the events that would eventually lead to him hiring a hitman to take out his rival, animal rights activist, Carole Baskin.

After binge-watching all seven episodes in just two days (some people have completed it in one), I could not stop talking about this series, and neither could everyone else on the internet. And then, talks of a second season. Wait, what? I have so many questions.

If you have not seen Tiger King: Murder, Mayhem and Madness, look away now, there are spoilers up ahead. But if you have, take a look at some of the questions we would like answers to should this show ever see a second season.

At the beginning of Tiger King, Carole Baskin, owner of Big Cat Rescue, is portrayed as the protagonist of the show. She's sweet, wears a flower crown, dresses in cat print, and calls people "cool cats and kittens" – how could she not be the hero?

But throughout the show, so many accusations are thrown her way that you cannot help but wonder if she is indeed hiding something. 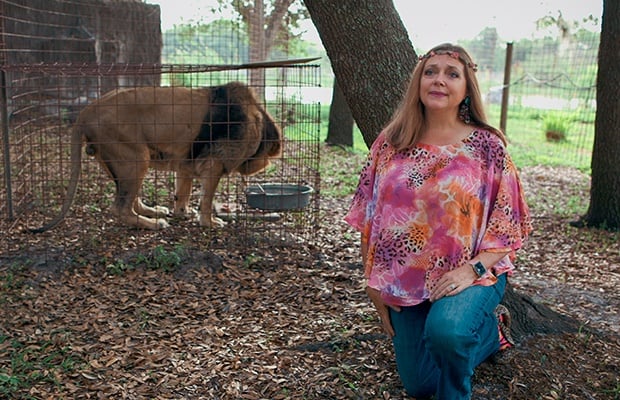 The biggest allegation, of course, is that Carole had something to do with the disappearance of her second husband, Don Lewis.

Will a second season reveal more about Carole's life? Will we get a glimpse of life inside Big Cat Rescue? We got to see every other tiger facility and got the inside scoop from employees, but never really heard from people who worked with Carole. Is there more to the lady in the flower crown? We need to know.

2. AN UPDATE ON DOC ANTLE, JEFF LOW, AND JAMES GARRETSON

At the end of the series, it is revealed that Doc Antle's facility was raided by cops in December 2019. Doc was accused of euthanising tigers but never responded to the allegations at the time of filming, the docu-series claims. However, a quick visit to the website for Doc Antle's zoo, Myrtle Beach Safari, shows that the facility is still open to the public. What happened after the raid?

Once Joe's knight in shining armour, Jeff Lowe quickly turned into another villain on the show when he took over the G.W. Zoo. But is the facility still operational? Has it attracted more people since the release of the series?

Jeff worked with authorities to get Joe arrested, and in the process, revealed a lot of his own dark dealings. "I'm not an angel, but God, put up your proof, you know? Stop talking about it," Jeff said in the final episode, referring to people who have accused him of committing crimes.

Then there's James Garretson. The strip club owner and big cat enthusiast who first turned undercover operative. James worked closely with authorities to get Joe arrested, and according to him, he thinks Jeff is next.

"I think Lowe will get arrested soon. He's said a lot of things, and all that stuff incriminates him," he said. He also added that he is not done working with police. "I don't think Joe will be in a cell alone; I think other people are going too. They don't know what I'm going to do. I don't think I'm finished in this." 3. LIFE BEHIND BARS FOR JOE EXOTIC

After being found guilty of trying to kill Carole Baskin, and on other charges relating to the Endangered Species Act, Joe is now serving a 22-year sentence behind bars. What has life in prison been like for Joe?

We also found out that Joe is said to be working with authorities to bring down other big cat owners who have been breaking the law. Who exactly is he referring to, and will we get to see that in action in a new season?

Additionally, new reports have stated Joe is suing the U.S. government for almost $94 million (over R1.6 Billion at current exchange rate), saying that he has been falsely arrested. And finally, the question that has been playing most on our minds. Can Joe really sing?

Throughout the series, we are introduced to a number of Joe's country songs and music videos, but now reports have claimed that Joe is not the real voice behind the music. So, who is it then? When I bobbed my head along to Here Kitty Kitty, who was I actually listening to?

WATCH THE DOCUMENTARY NOW ON NETFLIX

We live in a world where facts and fiction get blurred
In times of uncertainty you need journalism you can trust. For 14 free days, you can have access to a world of in-depth analyses, investigative journalism, top opinions and a range of features. Journalism strengthens democracy. Invest in the future today. Thereafter you will be billed R75 per month. You can cancel anytime and if you cancel within 14 days you won't be billed.
Subscribe to News24
Related Links
You can now binge HBO shows on M-Net's new pop-up channel
Pasha on 'The Bachelor SA': 'I'm a strong, real, straight-forward woman - and I don't speak...
FIRST LOOK: Disney shares trailer of documentary narrated by Meghan Markle
Next on Life
From old and new faces to a possible serial killer on the loose - all the drama to rock Suidooster