There's no getting around it. The world of international soap operas has been dominated by white characters for years. But things are slowly changing, as these shows become increasingly representative. One of the actresses making her mark is Kiara Barnes, who has been starring in The Bold and the Beautiful for almost three years.

Kiara's character, Zoe, is a British artist who becomes a model at Forrester Creations and finds herself in a complicated love triangle with Xander Avant (Adain Bradley) and his girlfriend, Emma Barber (Nia Sioux). Having had a brief fling with Xander while he was in London, Zoe is determined to win him back. 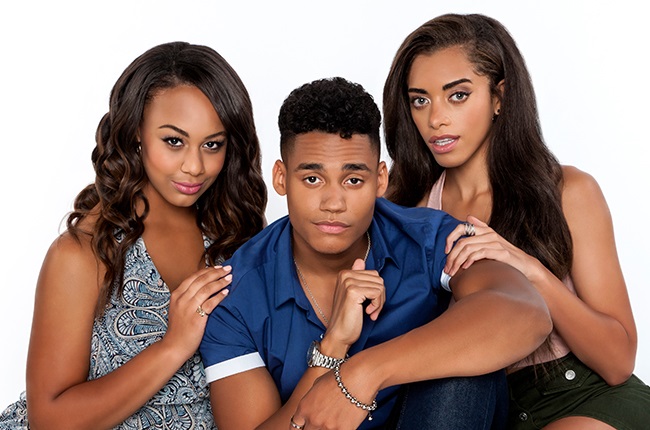 Nia Sioux as Emma Barber, Adain Bradley as Xander Avant and Kiara Barnes as Zoe Buckingham in The Bold and the Beautiful.
Photo: Gilles Toucas Photography

The fall-out from the 8000th episode sees Zoe front and centre, although now there's a different scandal brewing around her, this one involving her father and a baby and … we'll say no more, just that the showrunners have ensured a one-of-a-kind episode with a healthy dose of shock value.

Kiara is thrilled to have been such a big part of this milestone event. "It was awesome," she says. "It's incredible to see how long the show has been running. So grateful to be a part of it all."

READ MORE | The Bold and the Beautiful celebrates 8000 incredible episodes

And how does she feel about Zoe's role in the new storyline?

"Zoe is going through a lot right now," Kiara explains. "She's in a very difficult position, choosing between the truth and the protection of a loved one. Depending on what she does, she will be impacted not only with her career, but emotionally and mentally."

Kiara's delighted at the way Zoe has grown over the past few years. "It's been really great to be able to flesh out my character and build her story. As an actor, it's always fun to deep dive into finding all the details and traits of who you're playing."

While Zoe might not necessarily be someone you'd look up to, Kiara is a different story and is seen by many as a role model for her achievements and her outspokenness when it comes to the Black Lives Matter (BLM) movement.

"It's a great honour that people would hold me in such regard," she says. "I'm so grateful to be where I am, and in the position, I am with my career."

Kiara firmly believes there is still a lot of talking to be done around the issues facing black people in the US and around the world. "It's a tough subject, but also a very important conversation to be had," she explains.

BLM is just a way of life for me; it's how I grew up and what I've experienced. The hope is that people become more aware and have these discussions at home, speak up for those who feel compromised to do so, and make changes outwardly and inwardly by informing themselves.

The talented star's ultimate goal is to branch out into the industry and create more opportunities. "I hope to be able to create material in the filming industry with my own scripts and directing," she says emphatically. "I want to be able to bring more people of colour into roles that aren't just one-sided or stereotypical."

And as for Zoe? Will she keep the flame burning for actors of colour? "There is A LOT to come with Zoe. All I can say is, hang in tight! It's about to get wild. As for me, I'm open to any beautiful opportunities and blessings to come! May we all enjoy what's ahead on the horizon."

We live in a world where facts and fiction get blurred
In times of uncertainty you need journalism you can trust. For only R75 per month, you have access to a world of in-depth analyses, investigative journalism, top opinions and a range of features. Journalism strengthens democracy. Invest in the future today.
Subscribe to News24
Related Links
Three women from The Bold and the Beautiful talk candidly about life in the spotlight
'The Bold and Beautiful' renewed for two more seasons
Bold and the Beautiful's Scott Clifton on his character Liam: 'I could kill him a lot of the time'
Next on Channel24
Over 3.82 million tuned in for Noxolo Grootboom's TV news goodbye

Read more on:
tvthe bold and the beautiful
You've got mail!