Broadcasters will make big money from the Tokyo Olympics, but who will pay the ultimate price? 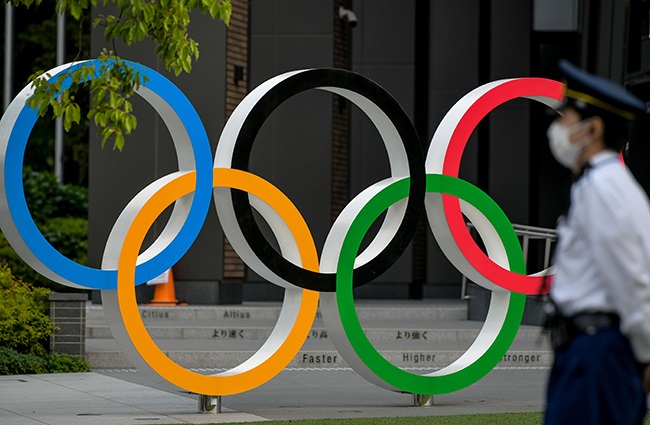 A policeman walks past the Olympic rings in front of the New National Stadium as protesters gather ahead of the demonstration against the Tokyo Olympics. (Photo: Getty Images)
If you're wondering why the Tokyo Olympic Games are going ahead despite an increase in Covid-19 cases in Japan and only 6% of the population being vaccinated so far, the answer is simple.

As The New York Times points out, the summer games will go ahead because of "billions of dollars, years of work and thousands of athletes who can't wait any longer".

"If Tokyo's new national stadium stands empty on the night of the opening ceremony, that will be $15.4 billion in investment mostly down the drain," the publication reports.

At this point, it's clear that the Olympics, which will start on 23 July, will be costly. But who will pay the ultimate price? Big businesses or the citizens of Japan?

The BBC reports that experts have said the daily infection rate in the host city of Tokyo needs to fall below 100 to hold the games safely. "On 21 June, the city's health authorities reported 236 new infections, with an average over the last seven days of just under 400 new cases a day," the BBC revealed.

"While I truly hope for everyone's benefit that this works out, you can't help feeling that the main motivator in this even taking place is money. So, will it be worth it?" Last Week Tonight host John Oliver said during a segment on his popular TV show.

The Olympics also mean big bucks for TV broadcasters. Bloomberg reports that NBCUniversal's broadcast of the Tokyo Olympics could be its most profitable ever.

Journalist Gerry Smith writes: "Jeff Shell, who leads Comcast Corp.'s NBCUniversal entertainment division, made the prediction Monday at an investor conference. He cited high demand for commercial slots from advertisers, along with the strength and popularity of the U.S. team."

According to The Hollywood Reporter, the International Olympic Committee (IOC) generates 75% of its income from selling broadcast rights, with NBCUniversal being the single largest source of that revenue.

"NBC paid the IOC $4.4 billion for the four Olympics spanning 2014 to 2020 and another $7.75 billion for the next six games running 2022 through 2032. Discovery Inc., which holds the European rights, is another major benefactor. Both companies have been banking on leveraging the games to boost their streaming platforms, Peacock and Discovery+," The Hollywood Reporter said.

The Tokyo Olympic Games, which was postponed in 2020 due to the pandemic, is set to take place from 23 July to 8 August 2021, followed by the Paralympic Games from 24 August to 5 September 2021.