With some burns, several cuts and tears – along with a beautiful Pick n Pay pantry nestled at the bottom of twin escalators and some expensive and specially imported food products – filming has concluded on the revived 4th season of M-Net's MasterChef South Africa in Cape Town.

The 4th season of MasterChef SA will start broadcasting on M-Net (DStv 101) from 28 February. Filming wrapped end of November at the mystery location at Cape Town's V&A Waterfront precinct.

It's here where amateur cooks from across South Africa have been wrapped inside a highly secure Covid-safe production bubble at their hotel and on set during November for the latest local version of the Banijay reality format show.

Early next year, DStv subscribers will once again be able to gawk – this time with daily episodes – at how amateur chefs try to dice, slice and sautée their way to try and become the latest MasterChef South Africa winner under the beady eyes of three new judges that M-Net will reveal in early 2022. 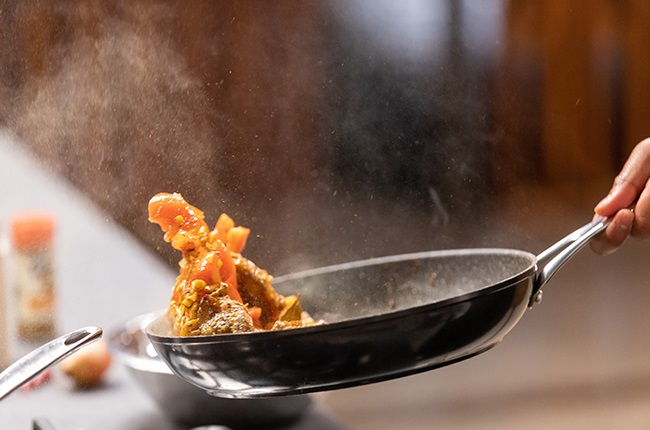 Contestants flown in from across South Africa have been shuttled to and from their V&A Waterfront hotel (where they were allocated their own floor), and the MasterChef SA set with its deluxe range cookware, utensils and gas hob stoves for the past month as their numbers dwindled.

Under the remorselessly ticking MasterChef SA clock above their heads – the original one that was found and restored – the cooking contestants had to display their best skills behind the pots and pans, with surprising results.

Unlike the previous three seasons with weekly episodes set at a wine farm, M-Net plans to unspool the 4th season of MasterChef SA, following the same schedule of four episodes per week as that of MasterChef Australia from a new departure point.

M-Net will broadcast a new MasterChef SA episode daily throughout March 2022, with Homebrew Films filming at a daunting pace, doing an episode a day during November.

Besides Covid-19 testing – the cast and crew were all vaccinated – production of the 4th MasterChef SA season involved a lot of other testing as well. Recipes, according to various themes, were tested several times ahead of time to ensure that contestants could craft dishes with certain specific ingredients within the allocated times.

With transparent refuse bins, so everyone can see who discards what, contestants have also been instructed to be mindful of food wastage – they'll be penalised this season if too much of the food from their pantry run is left over and unused once they complete their dishes for leftovers taste test.

"The contestants are inspiring, and viewers are going to love them. The ingredients they get to work with are the very best; a privilege to work with. And them getting to use some rare ingredients will instil a further love and respect for food. They get some recipe books to read and study at their leisure, but we definitely didn't want them to prepare formulaic dishes. With MasterChef SA, the goal is always to surprise and delight the judges with your own flair with food."
A cookbook author roped in to help look after the emotional well-being of this season's contestants.