Josh O'Connor, winner of the Outstanding Lead Actor In A Drama Series award for 'The Crown.'
Photo: Rich Fury/Getty Images via AFP

The Crown swept the drama awards at the Emmys on Sunday to finally coronate Netflix with a top prize on television's biggest night, as the streaming giant also claimed best limited series honours for The Queen's Gambit.

Netflix has transformed the TV landscape since creating its first original show in 2012 but had never won any top series prize before Sunday's ceremony - the small-screen equivalent of the Oscars.

In the comedy categories, Apple TV+'s Ted Lasso was the big winner.

A reduced audience of top television stars gathered in person for the event in Los Angeles for the first time in two years - it was held at a partially outdoor venue due to ongoing Covid-19 concerns.

The fourth season of the wildly popular British royal series depicted the ill-fated marriage of Prince Charles and Princess Diana.

Colman paid tribute to her father who died during the Covid-19 pandemic and "would have loved all of this", as she collected an award that had been widely expected to go to her co-star Emma Corrin, who portrayed a young Diana.

Josh O'Connor, named best actor for playing Charles, praised Corrin as a "force of nature" and said making the show had been "the most rewarding two years of my life". Josh O'Connor, winner of the Outstanding Lead Actor In A Drama Series award for ‘The Crown.'
Photo: Rich Fury/Getty Images via AFP

The Crown also won both supporting actor prizes - including one for Gillian Anderson for her portrayal of Margaret Thatcher - and awards for best writing and directing.

Its tally including technical awards handed out before Sunday's ceremony came to 11 - tied this year with The Queen's Gambit, and one short of the drama record held by Game of Thrones.

The Queen's Gambit, a limited series about a troubled orphaned girl who storms the world of professional chess, sent chessboard sales skyrocketing worldwide on its release last October.

"You brought the sexy back to chess, and you inspired a whole generation of girls and young women to realise that patriarchy simply has no defense against our queens," executive producer William Horberg told star Anya Taylor-Joy on stage.

"The one thing that no algorithm can predict and no billion dollar budget can manufacture is word of mouth," he said of the show becoming a global phenomenon. "I just want to acknowledge my fellow nominees in this decade that has to be about women having each other's backs," said Winslet.

She praised the show's creators for creating "a middle-aged, imperfect, flawed mother... you made us all feel validated, quite honestly." Kate Winslet, winner of the Outstanding Lead Actress in a Limited or Anthology Series or Movie award for 'Mare Of Easttown'.
Photo: Rich Fury/Getty Images via AFP Ewan McGregor, winner of the Outstanding Lead Actor in a Limited or Anthology Series or Movie award for 'Halston.'
Photo: Rich Fury/Getty Images via AFP

Michaela Coel won the Emmy for Best Writing in a Television Limited Series or Movie for I May Destroy You. The 33-year-old gave a powerful speech, imploring writers to, "write the tale that scares you, that makes you feel uncertain, that isn’t comfortable. I dare you."

"And I wouldn't be here without those three things in my life." 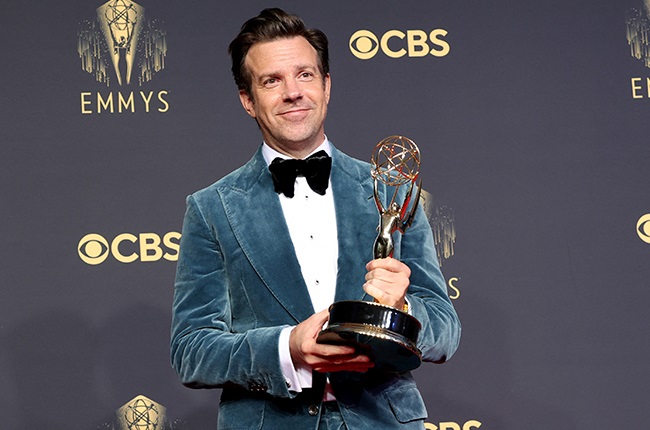 But it missed out on comedy writing and directing to Hacks, whose star Jean Smart won best actress for portraying a faded diva scrambling to save her residency in Las Vegas.

Veteran TV star Smart earned a standing ovation and paid an emotional tribute to her actor husband Richard Gilliland, who died six months ago, for "putting his career on the back burner".

The show opened with rappers LL Cool J and Lil Dicky and actress Rita Wilson leading the celebrities in a singalong of late rapper Biz Markie's Just A Friend, riffing on the year's nominated television shows.

But following the musical number, actor Seth Rogen nodded to the circumstances, joking that "there are way too many of us in this little room".

"Why is there a roof? It's more important that we have three chandeliers than that we make sure we don't kill Eugene Levy tonight," he added.