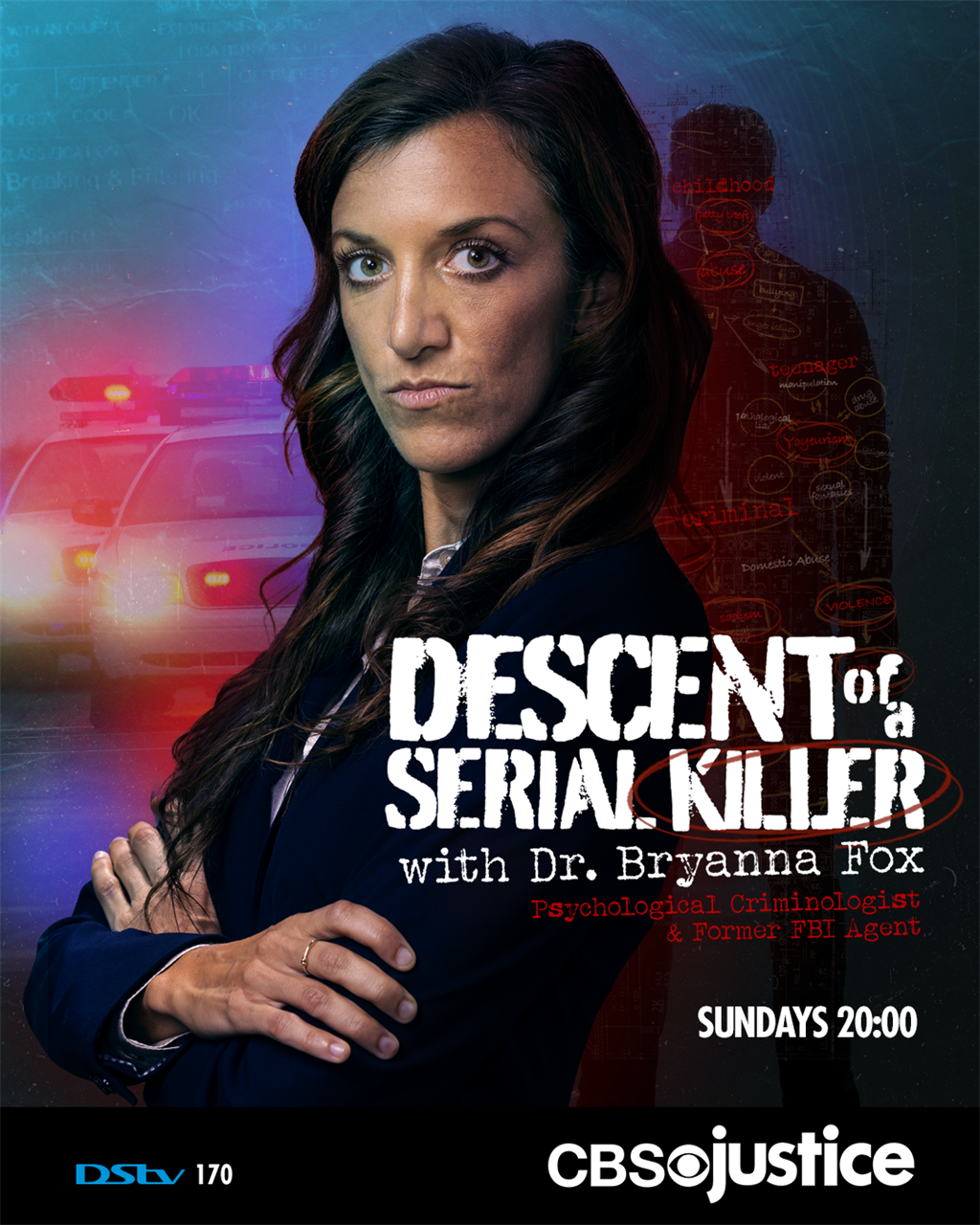 Descent of a Serial Killer is a new docu-series arriving on CBS Justice (DStv 170) this July.

The first season of this True Crime Original, consisting of five episodes, will air Sundays at 20:00 starting on 3 July.

The show is led by former FBI agent Dr Bryanna Fox and a panel of experts who delve into some hair-raising cases to find out just how an individual goes from seemingly an average member of society to someone who commits multiple murders.

"We just finished shooting today. This is the end of the shoots for the series. This is a good crew and definitely a really interesting show, so you know, bittersweet," Dr Fox told News24 during a recent interview to discuss the show.

"We were all discussing how we wanted to put together this show, and the way we decided to do it was me collating a team of experts rather than just me weighing in on every single case," said Fox, a psychological criminologist and a Professor in Criminology.

The series delves into the dark world of serial killers with a cast of highly skilled experts who unpack the sequence of events that led to these murderers becoming serial offenders. It zooms in on when worrying traits first pop up, how these killers gradually start to push the boundaries, and "the disintegration of personal morality".

"We really wanted to see the types of red flags and have them be spoken about by experts who are specifically researching those exact issues. There are certain things that we all definitely agree on, and it's important for the audience to see how we all have different perspectives and takes. There are certain instances where we all see something different too.

"It's almost like when you look at a painting, some people will notice one thing, some people will notice another, but we all sort of pick up on the big picture things, and that's uniform across these experts. They've talked to different serial killers and have studied or investigated them. We all have different perspectives, but yet at the end, we certainly all agree on some big picture issues."

There isn't one blueprint for identifying or even understanding a serial killer. It's often a misperception that all serial killers have the same traumatic backstory that led them to kill, but that's not the case, says Dr Fox.

"There are so many avenues and trajectories into this. Many people assume there's one pathway from development to serial killing or other types of extreme behaviour, but that's not true. Lots of people don't have any trauma, they don't have a severe head injury or trauma, but they may have some type of strain in their life because their parents are very domineering or they have very low self-control. It's usually not one thing either. It's usually a combination of factors. There are so many things that we're still trying to study, which is why I'm an active researcher."

Dr Fox adds, "A police officer might see one serial killer in their entire life; maybe if you work for the FBI, you'll see five in your whole life. I review hundreds of cases. I've interviewed more serial killers in the past six months than most people will ever investigate in their entire lives, and that's how I am able to learn these different pathways and do deeper assessments. When the police investigate a case, they aren't necessarily focused on the 'why'. They need the evidence. They don't have the budget to go into the depth of why. They just have to solve the case.

"That's more what the researchers, like me, are doing. If we know the 'why', we can see red flags earlier and potentially stop these types of crimes from happening. That's my motivation for doing this."

We live in a world where facts and fiction get blurred
In times of uncertainty you need journalism you can trust. For 14 free days, you can have access to a world of in-depth analyses, investigative journalism, top opinions and a range of features. Journalism strengthens democracy. Invest in the future today. Thereafter you will be billed R75 per month. You can cancel anytime and if you cancel within 14 days you won't be billed.
Subscribe to News24
Next on Channel24
SABC 1 introduces docu-reality series, Fooled By Love