WATCH: We went racing with The Stig...and well...this is what happened

Johannesburg – Imagine yourself in the passenger seat of a sports car, and behind the wheel is none other than The Stig. Yes, the mysterious racer made famous by the BBC show, Top Gear.

Channel24 was among a handful of media chosen to take part in a lap around the Kyalami circuit on Sunday with none other than The Stig at the helm.

Here's what went down

Let me start by saying that I am a huge Top Gear fan. I mean, I know absolutely nothing about cars, but the beauty of the show is you don't have to be a motorhead to appreciate it. So, when I heard that I would be racing around a track with The Stig, I was over the moon, immediately messaging my brother to give him the good news.

After screeching with excitement for a little bit, I then took some time to rub it in the face of my colleagues, as one does. The next few days would be spent imagining just how amazing the experience would be.

The meeting was set to take place at the SA Festival of Motoring – a motoring event held annually at the Kyalami Grand Prix Circuit in Johannesburg. Upon arrival, we were briefed about procedures and then led to a waiting area where we got a great view of the circuit.

Let me put things into context for you. Have you ever been stuck on the side of a busy road? If you have, then you're familiar with the feeling you get when cars speed by, shaking your stationary vehicle just a little with the gust of wind left in their wake. That's kind of what it feels like standing on the side of a racetrack. Okay, you're too far away to feel any breeze emitted, but the noise alone sends shivers down your spine as the ground beneath you trembles just a bit. Also, these cars are going much, much faster than the average one on the open road.

It was at that point, watching those vehicles zoom by, that I realised what I had gotten myself into. I mean, if you thought they were racing, you should have heard my heart. I was about to hop into a speed machine, at the mercy of a mystery guy in a white jumpsuit, how could I not be nervous?

It also didn't help that we witnessed a crash on the track just minutes before my lap was supposed to take place (Side note: both drivers involved in that crash emerged unscathed). 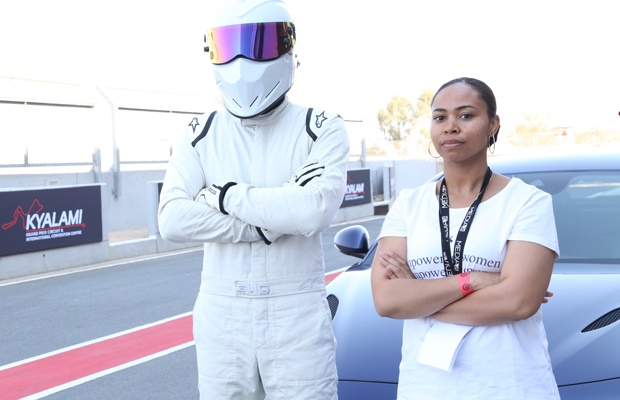 Again, if you watch Top Gear, then you know that The Stig is a man of few words. Wait, scratch that – no words.

So there I was, sitting in the passenger seat. As soon as I buckled my seatbelt, we were off. Slowly at first, until we reached the red traffic light at the beginning of the track.

Those few seconds, waiting for the light to turn green, were some of the most awkward of my life. Think about it – you're in a car with an unidentified driver who does not even acknowledge your existence. Literally, anybody could be underneath that suit.

Of course, that didn't stop me from making conversation. It went something like this:

Me: "I have an important event tomorrow, so please, try not to kill me."

Once we hit the track, all my fears had subsided. It was one of the most exhilarating experiences. The skill demonstrated by The Stig is unbelievable.

A standout moment was when I asked him to beat a competitor who was ahead of us on the track. Without even so much as a nod in response, he put the pedal to the metal, swerving around corners as I cheered him on.

"Come on, Stig!" I remember yelling as we neared our rival.

There was one more curve ahead as the end of the track came into view. It was now or never. We leaned to the right as we took the bend, forcing the other car to give way.

Yes! We had taken the lead – The Stig at the helm, with me as his co-pilot. That's right, I'm counting this as a win for myself too.

We live in a world where facts and fiction get blurred
In times of uncertainty you need journalism you can trust. For only R75 per month, you have access to a world of in-depth analyses, investigative journalism, top opinions and a range of features. Journalism strengthens democracy. Invest in the future today.
Subscribe to News24
Related Links
Fezile Mkhize crowned first runner-up at Mr World: 'It has been more than I ever thought it would...
WATCH: 7 most followed SA celebs on Instagram
Sho Madjozi celebrates 1 million views on her Colors performance
Next on Channel24
Devilsdorp breaks viewing record as Showmax launches spin-off podcast series