MultiChoice makes it crystal clear on RT going dark in SA: 'It's out of our control' 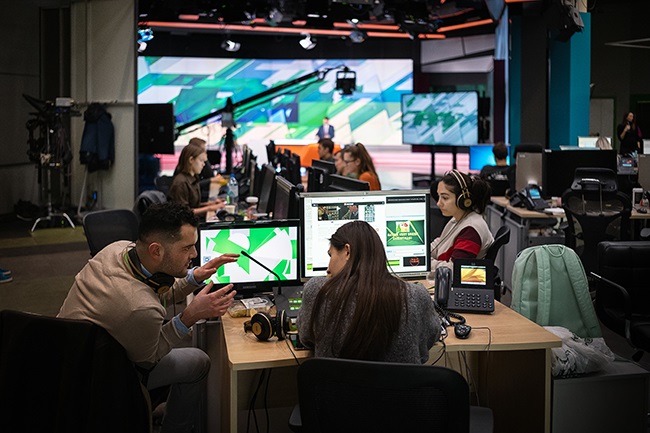 MultiChoice on Friday morning again had to release a statement making it clear that the airing of RT in South Africa is completely out of its control.

This came after several local news outlets and the EFF wrongfully blasted MultiChoice for the Russian state-back channel going dark in SA.

"We want to reaffirm that we cannot continue to broadcast Russia TV on DSTV for reasons outside of our control. The global distributor of the channel (who are based in Europe) stopped providing the broadcast feed to all its suppliers, including MultiChoice, because of the sanctions imposed on Russia by the European Union.

"Our role as a broadcaster is to provide a platform for diverse news channels. Our aim is to enable our subscribers to select channels they wish to view. We do not have editorial control over the content of  'third party' channels, nor do we endorse any points of view."

Where did RT go? ICASA updated as many weigh in on Russian TV network going dark across the world MultiChoice on Thursday told News24 that it has been in communication with South Africa's broadcasting regulator ICASA after it lost access to Russian state-backed channel RT on Wednesday evening.

MultiChoice said in a statement that RT is gone until further notice since "sanctions imposed on Russia have led to the global distributor of the channel ceasing to provide the broadcast feed to all suppliers, including MultiChoice".

At the time ICASA expressed concern that MultiChoice didn't inform it that RT would be removed from DStv.

According to MultiChoice it communicated to ICASA early on Thursday the circumstances that led to the discontinuation of RT.

"It was not possible to notify ICASA yesterday (Wednesday) as the global distributor of the channel abruptly stopped the broadcast feed to all suppliers, including MultiChoice," SA's leading entertainment company told News24.

The South African National Editors’ Forum (SANEF) on Thursday afternoon also released a statement on the matter saying it’s "concerned about the suppressing of a range of news channels reporting on the crisis in Ukraine.

"This is ranging from silencing independent news channels within Russia to channels such as RT (formerly Russia Today or Rossiya Segodnya) removed on the MultiChoice platform in South Africa.

"The RT feed was blocked by MultiChoice's provider in Europe as a result of wide-ranging sanctions introduced by the EU against Russia in the aftermath of that country's invasion of Ukraine. This was followed by the blocking of RT from numerous news feeds and tech platforms globally," SANEF said.

"While we support freedom of access to a diversity of views, we do not support disinformation on any channels; and appeal to all to report factually, impartially, and truthfully for the benefit of all their audiences."

The non-profit organisation - whose members are editors, senior journalists and journalism trainers from all areas of the South African media - added: "RT is a Russian state-controlled international television network funded by the tax budget of the Russian government; and as such widely perceived as a state propaganda tool. It is nevertheless a source of information from Russia, that viewers could access along with all other channels, to critically assess its credibility and information for themselves."

Before a pay-TV service like MultiChoice adds TV channels, it has to get permission from ICASA.

"ICASA wants to put it on record that the broadcast of RT on the DStv platform is and continues to be a commercial agreement between the subscription TV broadcaster, MultiChoice and RT," the regulator said in a statement to the press.

"The authority's role in the broadcasting of RT has been solely limited to channel authorisation as submitted by the licensee – in this case, MultiChoice – and approved by ICASA prior to the channel being introduced," ICASA chairperson Dr Keabetswe Modimoeng added.

Meanwhile, the Broadcasting Complaints Commission of South Africa (BCCSA) confirmed that it had received complaints over RT airing in South Africa since last week.

The BCCSA told News24 on Thursday morning in response to a media query that it had received 26 complaints from South African viewers over Russia Today until yesterday (Wednesday) morning. The BCCSA once again stressed that the organisation does not have the jurisdiction to remove or reinstate a TV channel.

The EFF political party, in a statement, wrongfully accused MultiChoice of the removal of RT, saying, "The EFF condemns broadcasting company MultiChoice for unilaterally deciding to remove Russia Today from the bouquet packages of DStv, in the midst of the Russia and Ukraine conflict."

It added: "We demand the immediate reinstatement of Russia Today".

MultiChoice in its official statement clearly highlighted that the channel feed was discontinued by the global distributor and was not a decision made by the local broadcaster.