You can now watch the Gossip Girl reboot on Showmax Psst! The first 10 episodes of HBO's Gossip Girl reboot are now available to binge, first on Showmax, with the final two episodes coming express from the US on 10 December 2021.

The reboot's launch saw it trending at #1 on Twitter and generating over 15 billion total social impressions, pulling in a record number of viewers over Part 1's first weekend on HBO Max in July this year.

Based on the bestselling novels by Cecily von Ziegesar, the original 2007-2012 Gossip Girl won 18 Teen Choice Awards and helped launch the careers of the likes of Teen Choice winners Leighton Meester (The Roommate) and Blake Lively (The Age of Adaline), not to mention multiple Teen Choice nominee Penn Badgley (You).

Now this extension of the pop culture classic takes us back to the Upper East Side, finding the next generation of New York private school teens about to start the school year at Constance St Jude's. But this is 2021, and social surveillance has become a very different beast in the nine years since the original blogger's website went dark.

"[The new Gossip Girl] exists in the same world," explains Eli Brown (Wrath of Man, Pretty Little Liars: The Perfectionists), who plays Obie. "It's very wealthy teens living on the Upper East Side in New York and living these crazy lives, but there's a lot more representation. It's more progressive. Social media plays a [part]. So it is the same show, it's the same universe, but it's an entirely new way of seeing things."

Newcomer Savannah Lee Smith, who plays classic mean girl Monet, says: "It gives you all you want from Gossip Girl. It gives you sex, it gives you queerness, it gives you drama... just deliciousness. But it's different because there's social media now. In 200[7], it was a blog, and now it's Instagram and Twitter."

"The biggest difference is social media," says showrunner Joshua Safran, who was also an executive producer on the original. "Social media didn't exist the first time around. So we're actually looking at how they curate themselves, how they put themselves forward in the world, and Gossip Girl's actually going to blow that up, which is a whole new level."

The question of authenticity is at the heart of the show. "Everyone's trying to be authentic, but what is authenticity if your entire life you've been raised to put forth a false sense of who you are?" Joshua points out. "The show deals in that - what, truly, does it mean to be authentic? Can we really be authentic in this day and age? And should we be? Is authenticity reality, or is it how we protect ourselves? There's a lot in there." 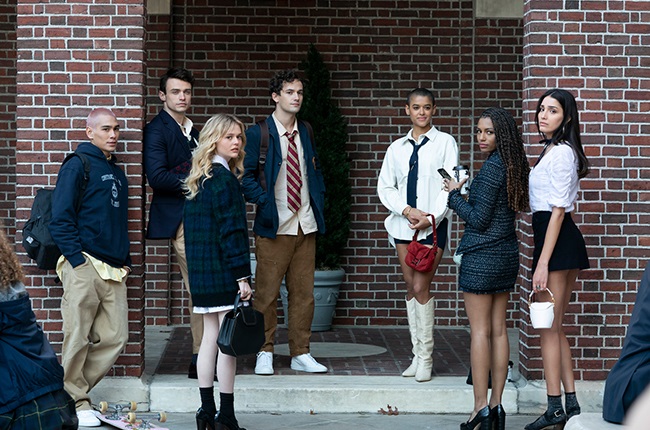 Plus, we'll let you in on a little secret - amid all the gorgeous fresh faces, People's Choice Award winner Kristen Bell (The Good Place, Veronica Mars) returns to voice the anonymous blogger and "Gossip Girl".

And the most delicious goss yet? Gossip Girl has already been renewed for a second season.

Also catch all 122 episodes of the original Gossip Girl for a limited time only until 31 March 2022.