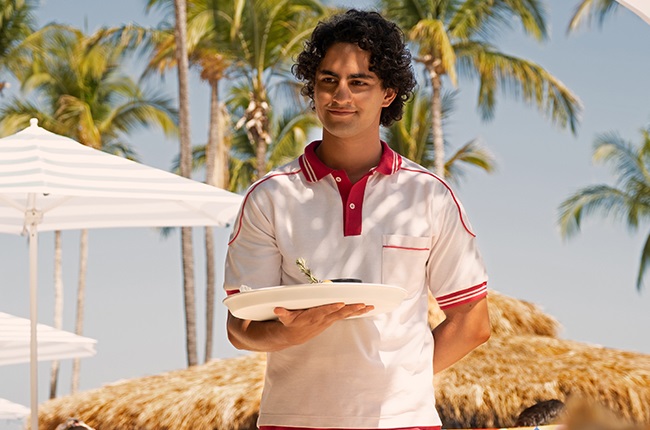 Acapulco tells the story of twenty-something Máximo Gallardo, whose dream comes true when he gets the job of a lifetime as a cabana boy at the hottest resort in Acapulco.

Acapulco hits that sweet spot between a relatable story and one that feels completely fresh; it has a sense of optimism and lightness to it without feeling too shallow. It's a coming of age story with an eccentric group of characters and extremely heartwarming moments that will have you thinking about it long after you've turned off the TV.

Acapulco tells the story of Máximo (Eugenio Derbez), who is telling his nephew Hugo (Raphael Alejandro) his life story in a How I Met Your Mother type of way. We see Máximo as a wealthy older man with many thriving businesses. He flashes back to the 1980s when he is a twenty-something living with his mother, Nora (Vanessa Bauche) and sister Sara (Regina Reynoso) in Acapulco, Mexico. Máximo dreams of working at the famed Las Colinas luxury resort. For Máximo, Las Colinas is an answer to his financial problems and will be his gateway to wealth. For his mother Nora, Las Colinas is the den of sin that will cause her son to stray. What Las Colinas really is, is a mixture between the two. It's definitely a place ripe for opportunity, but the "whatever the guest wants, the guest gets" aspect requires a certain amount of sacrifice from those who work there.

A lot of the success of the show falls on Enrique Arrizon, who plays young Máximo. He is our link between the world of Las Colinas and his world at home with his mother and sister. And he is also the one who keeps us enthralled in both of these worlds. Máximo's innocence and effortless charm make him a likeable lead even when we should be more annoyed by his character. You believe in his child-like optimism and his desire to better his circumstances. This all comes down to Arrizon's performance; he creates a character that you want to root for.

Unlike The White Lotus, Acapulco does not spend much time on the white tourists visiting the resort. Most of the time is spent on the employees at the resort and their various journeys throughout the season. The guests are only seen through the eyes of the employees and are never there long enough to make an impression other than to help Máximo learn a lesson that he can relay to Hugo.

This does give the supporting cast at the resort a chance to shine. There is Julia (Camila Perez), the receptionist and Máximo's crush, Chad (Chord Overstreet), who is Máximo's love rival and the boss' son. There is Hector (Rafael Cebrián), Máximo's suave work rival and Diane (Jessica Collins), the soap actor turned aerobics mogul who owns the resort. Fernando Carsa plays Máximo's best friend Memo, who starts working at the resort with him, and he is hilarious. Every scene with Memo had me laughing out loud and looking forward to his scenes. And there is Don Pablo (played by veteran Mexican actor Damián Alcázar), who comes from the same street as Máximo and became successful as an employee at Las Colinas. Don Pablo is Máximo's inspiration and is instrumental in helping him get a job at Las Colinas. He is a cautionary tale for what you have to sacrifice to become successful.

A lot of the heart in the story comes from the subplot featuring Máximo's relationship with his mother and sister. His motivation for making money is so that he can pay for surgery for his mother's eyesight. And you can see how serious he is through what he sacrifices to help his mother. Nora, herself, is trying to navigate dating again after the death of her husband. While Sara is coming to terms with her sexuality in a time that was not as widely accepting.

Each episode is bookended by the present-day story of older Máximo and Hugo. This was my least favourite aspect of the episodes. I often felt as if it was too far removed from the character of Máximo that we met at Las Colinas, and it took away from the momentum. And if Máximo was played by anyone other than Eugenio Derbez, it might have annoyed me more. But Derbez is such a compelling actor that I put up with it just to enjoy the little bit of screen time that he had. However, as the episodes went on and we discovered more about older Máximo and his present-day life, and it teased at how things ended for him at Las Colinas, I became intrigued by this aspect of the story. I wanted to know more about why older Máximo was in the circumstances that he was in.

Another thing that I enjoyed about the series is that it didn't feel as if the Mexican characters in the show were 'othered'. Most of the main cast is made up of Mexican actors, and because it focuses on the community around the resort, it feels localised. The characters in the show also speak Spanish to each other as one would do when you are speaking to someone who has the same first language as you, and only speak English when they are talking to the guests – or Diane and Chad. This is seamlessly done, and it feels so natural and authentic that it adds to the tone of the show.

Acapulco is a delightful comedy that pulls on the heartstrings. If you are looking for something to fill the Ted Lasso gap while you wait for season three, Acapulco is all that and more.