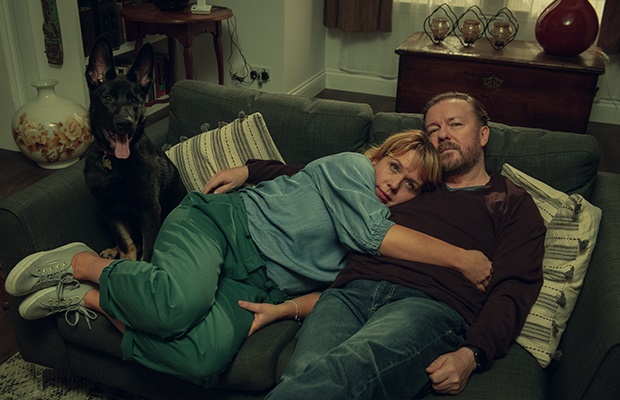 Kerry Godliman and Ricky Gervais in 'After Life' (Ray Burmiston/Netflix)

After his wife dies of cancer, Tony comes within inches of killing himself, stopping only because he realised no one else would be able to feed his dog. Depressed and hopeless, Tony makes the decision to reject any sort of socially accepted norms and be as brutally honest as he wants to everyone around him – including his co-workers at the town’s local newspaper, the nurse looking after his father and virtually anyone who is unfortunate enough to cross his path. Will Tony find something to live for before everyone he knows finally turns their back on him?

It's been interesting following Ricky Gervais in the years since splitting with his long-time creative partner Stephen Merchant - with whom he co-created the Office and Extras and who together launched Karl Pilkington into unlikely stardom. They also made the decidedly less worthwhile, Life's Too Short, but we'll try not hold that against them.

Over the past decade or so, Gervais has made at least one interesting film (The Invention of Lying), embarked on a couple of successful stand up tours and created another well-received TV series (Derek) but more than anything he has become Ricky Gervais, the personality. From his Twitter account to appearances on various talk shows and news programmes to, of course, his infamous (but largely hilarious) turns at hosting the Golden Globes, Gervais, the man, has all but overshadowed Gervais, the creator. Even returning to his most famous role in, among numerous shorts, the frankly unbearable David Brent: Life On the Road has done little to change this.

It would be nice to judge After Life, his latest comedy-drama from Netflix, purely on its own merits but by this point, any new Ricky Gervais project comes with a hell of a lot of baggage. Your personal feelings towards Gervais will undoubtedly colour how you feel about After Life. It's a show with obvious notes of brilliance, but it has a number of serious flaws too – and how much power you give each of these will depend very strongly on how much goodwill you have toward the show's creator.

Personally, I can't help but see this as a major return to form after Life on the Road and, arguably, the best thing he's done since Extras. It's just a pity that Gervais can't help but get in own way from time to time.

Take, for example, the way that Gervais works his atheism into the show. Now, considering that the show is all about death and existentialism, it's more than appropriate that questions of God and the afterlife come into play. After Life may nominally be a comedy (and it is a very funny one at that at times) but it's clearly as much a drama that isn't afraid to tackle the big questions head-on. The problem, though, is the way in which the more metaphysical aspects of his character's grief are addressed.

Rather than actually exploring these issues, Gervais effectively stops the show a few times a season for his character, Tony, to explain to his kooky, air-headed co-worker, Kath (Diane Morgan), the beauty of atheism in some of the most lop-sided debates you could hope to come across. Gervais' critics would be quick to point out that this is exactly the sort of thing he does in his smug need to be the smartest person in the room and, regardless of whether that's fair or not, this is the way he comes across in this particular instance. The problem isn't that he's an atheist or that the show has a fundamentally atheistic philosophy but that the way that the subject is addressed comes across as intellectually lazy, superficial and nowhere near as profound as he seems to think it is.

And, though these arguments are by far the most egregious example of this not insignificant flaw, it's a weakness that undermines far too many other aspects of the show for it to ever quite make the jump from very good to excellent despite so many truly excellent things about them. In particular, while being solidly funny, After Life is also a frequently moving exploration of grief that strikes many a true chord that is often undermined by a tendency to reduce its supporting cast to caricatures and a reliance on a few too many plot contrivances for it to ever fully transcend its more artificial moments.

With that said, you can actually forgive After Life these transgressions on the basis that the show is still a comedy and believability might be a reasonable price to pay for some solid laughs – and just as solid tears. One thing that's much harder to forgive, though, is one the most misjudged, teeth-gratingly awful running jokes I've ever seen in an otherwise decent comedy.

I'm talking, of course, about Paul Kaye's unbearable and horribly unfunny therapist character. Psychotherapy is often the butt of a joke in comedies, and we are at the point where it has become an incredibly tired and far too familiar gag. What this is, though, is much worse than just tired and lazy. This character starts as startlingly unfunny, but by the time the second season comes around, he is this truly grotesque, comedic black hole in the middle of an otherwise good series. Most perplexing of all, though, is that the only time After Life removes itself from Tony's point of view (Gervais is in every scene otherwise) is to focus on this "character". The therapist is lame in season one, but he's almost enough to make me write off the second season entirely.

I won't, though, because however flawed After Life so clearly is, it's also incredibly effective in so many ways. I often find Ricky Gervais' comedy to be more smart than truly funny (which is why I think that the UK Office was a nice jumping-off point for the infinitely superior American version) but he gets some genuine chuckles here. Sure, a good portion of the laughs come from a) Tony acting like a total dick to people who often deserve it and b) the small-town bumpkins on whom Tony's work at the local newspaper relies. Still, funny is funny and that one horrendous misstep aside, After Life pretty much works as a comedy.

No less impressive, though, is how effective and affecting the show is as a drama. Effectively, After Life is centred on Kubler-Ross' five stages of grief, with season one mostly dealing with Tony's anger and season 2 dealing with his depression, with hints of bargaining and acceptance coming up along the way. It's a smart move that keeps the series fresh and gives the two seasons distinct flavours in both their comedy and drama.

As I've already pointed out, not all of this works, but there is a rawness to both the writing and Gervais' performance – as well as some very nice supporting performances from most of the cast with Penelope Wilton and Ricky's Extras co-lead, Ashley Jensen as particular standouts – that gives the thing some real emotional heft. Also, while it may be a bit shallow in some areas, it's quite thoughtful, even nuanced in others. Tony's love for his wife, for example, is depicted as being achingly romantic but is ruled by an obsessive quality that is the dark side of romantic love.

What this all adds up to is a series that will affect different viewers very differently (my more measured response doesn't really capture just how much some people absolutely love it, and some people totally despise it in seemingly equal measure) but it's unquestionably well worth a watch. Not least because the whole thing so far is made up of only twelve, half-hour episodes. I should say, though, that it's unfortunate that After Life has arrived in the massive shadow of Fleabag because Phoebe Waller-Bridge just utterly demolishes Ricky Gervais at his own game. Oh well.