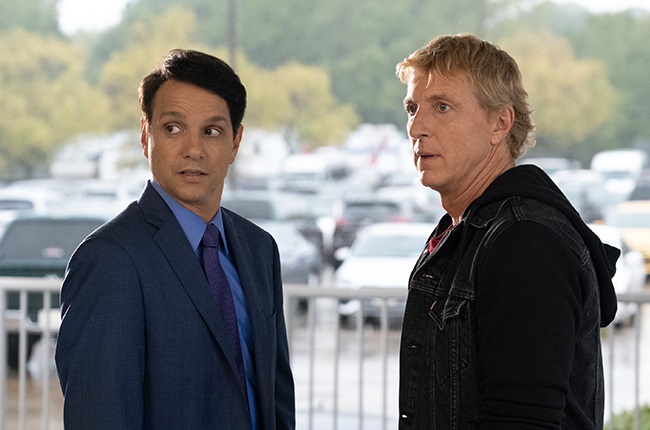 In season 3 Daniel LaRusso (Ralph Macchio) and Johnny Lawrence (William Zabka) have to deal with the aftermath of the events of the season 2 finale. As a formidable foe rises, the two have to learn to put their differences aside for the good of their community and students.

Cobra Kai continues to be one of the more pleasant surprises to come out in the last few years and season 3 is no different. When we pick back up, all the characters are dealing with the fallout of the brawl at the high school.

Johnny (William Zabka) is still dealing with Miguel's (Xolo Maridueña) injury. Miguel is still in a coma and once he comes out, seems to be paralysed from the waist down. Johnny Lawrence being Johnny Lawrence, is not dealing with this well and is destructive - the way he copes when things go wrong. Johnny is not perfect, but I don't think he's supposed to be. And that's why I like his relationship with Miguel because despite him being the sensei, Miguel is a good influence on him as well. By the end of the season, we can see a nice development of him as a person and character.

This season really builds the characters well. While in seasons 1 and 2, Daniel (Ralph Macchio) was deeply annoying and our hero from the Karate Kid movies had grown up and become a little self-centred and arrogant. But season 3 sees him taken down a peg or two, especially during his trip to Japan. The whole trip to Japan is a throwback to the second movie in the franchise, and while these throwbacks are fun, this one felt a bit overboard. The whole interaction with his love interest Kumiko (Tamlyn Tomita) felt forced; it was trying to live in the past, rather than using the past to move forward. But he runs into the rival from Karate Kid 2, Chozen (Yuji Okumoto) and this is where Daniel grows a little bit and is not as annoying when he gets back home.

Amanda LaRusso (Courtney Henggeler) remains the MVP of this show. Not only does she put up with all Daniel's nonsense, but she also stands up to Kreese (Martin Kove) in a spectacular way. She is not afraid of him, and she is amazing. A direct antithesis to Amanda is John Kreese, and despite getting a bit of his backstory of how he got to be the way he is, there is still absolutely no sympathy for him. If there was ever a character who would be described as a cancer, it would be him. He is emotionally manipulative and abusive to his students, encouraging bullying and violence.

And it's through this that we see that despite keeping some lessons from his time at Cobra Kai, Johnny is not a bully at heart. He wants his students not to be pushovers, to defend themselves but not to be outright mean people. The way Kreese poisons the minds of his students is mind-blowing.

He encourages their innate penchant for violence, and we see this, especially in the character development of Eli aka Hawk (Jacob Bertrand). In season 1, Eli was a boy who was bullied and joined Cobra Kai to be able to defend himself but by season 3, thanks to the influence of both Johnny and then even more so, Kreese he is a fully-fledged bully.

The message of how a sensei or even just a mentor can influence a young person is loud in this show. We have Daniel, who's taken on Robby (Tanner Buchanan) and Sam (Mary Mouser). Johnny who's taken Miguel and several others under his wing and then Kreese who has recruited kids purely for their brokenness. It's easier to manipulate kids who feel unloved and unwanted, and he plays on this. It's what he did to Johnny in the Karate Kid movies, and he has not grown as a person at all.

As usual, there are a lot of throwbacks to the movies. Some of them work. Some of them don't, but they mostly do serve their purpose of driving either the plot forward or in growing these characters.

The season ends in a surprising yet very satisfying way, and I'm keen to see how season 4 will play out.

We live in a world where facts and fiction get blurred
In times of uncertainty you need journalism you can trust. For only R75 per month, you have access to a world of in-depth analyses, investigative journalism, top opinions and a range of features. Journalism strengthens democracy. Invest in the future today.
Subscribe to News24
Next on Channel24
The Stand