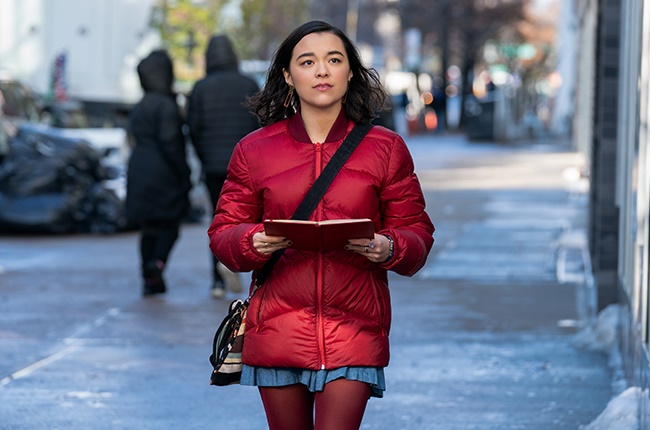 Opposites attract at Christmas as cynical Dash and sunny Lily trade messages and dares in a red notebook they pass back and forth around New York City.

The dating world can be a nightmarish place - especially in the digital age. You can find out everything you need to know about someone with just a casual social media search before even meeting them. Our first snap judgments can potentially prevent us from great potential matches, especially when our peers could shape our perception of who we should be falling in love with. Dash & Lily is a step away from that, harking back to the days of written courtship instead of a 'you up' text message at midnight.

Two teenagers - one a jaded sad-boy who hates Christmas and the other a bright-eyed eternal optimist hoping to experience her first kiss - correspond through a red notebook filled with dares and youthful angst. They try to get each other out of their respective comfort zones and in the process fall for the dreamed-up versions of their heads.

They are played by Austin Abrams and Midori Francis - the former more well-known than the latter - who are both very apt at playing up the quirkiness of their personalities. On paper, these characters sound achingly bland and like every other weirdo that's been churned out of the Hollywood teenage machine, but Abrams and Francis steep them deeply into character development that luckily makes them more digestible for a mature palette.

That ends up being a double-edged sword, though. The teenagers in this series don't exactly feel very high school, and at first, I honestly thought they were in university. From fancy dinner parties to roaming the streets of New York on their own to orchestrating big romantic gestures - activities that sound more suited to an adult rom-com than young adult romance. I can get on board with the fact that the two leads are old souls, but there are limits to how mature they should be - sometimes even way more mature than the supposed adults around them. The fact that I - a 30-year-old woman - can relate to this supposed teenage romance makes me wonder if the series would resonate with actual current teenagers. On the other hand, that might be the trick of it all - throw out that audience-net as wide as possible, which can often be the case with streaming content.

At least there's a Jonas Brothers cameo to remind you that it is, in fact, a series for high schoolers.

Dash & Lily is eight bite-sized Netflix episodes perfect for bingeing, and the fact that it's based on a series of books means that there are lots of material for more seasons. While the Christmas theme makes it a timely release, I'm not sure if the story can sustain itself beyond the notebook trope without becoming stale. Yet for someone who isn't a big fan of Netflix's rom-com fare, I found myself wanting to constantly turn the page after each episode, and their cuteness is further amplified by supporting cast Troy Iwata - who plays Lily's slightly stereotypical gay brother - and Dante Brown - playing Dash's best friend and quite honestly one of the highlights of the show. Out of everyone, he's probably the most authentic teenager with his adorkable persona and not scared of calling his friend out on his crap.

At first glance, the series can appear as a paint-by-numbers teenage romance, but the maturity of the characters and profound realisations turn it into a fun escapist holiday for anyone regardless of age. As long as you don't loathe the Hollywood magic of an overly commercialised holiday.

We live in a world where facts and fiction get blurred
In times of uncertainty you need journalism you can trust. For only R75 per month, you have access to a world of in-depth analyses, investigative journalism, top opinions and a range of features. Journalism strengthens democracy. Invest in the future today.
Subscribe to News24
Next on Channel24
Truth Seekers