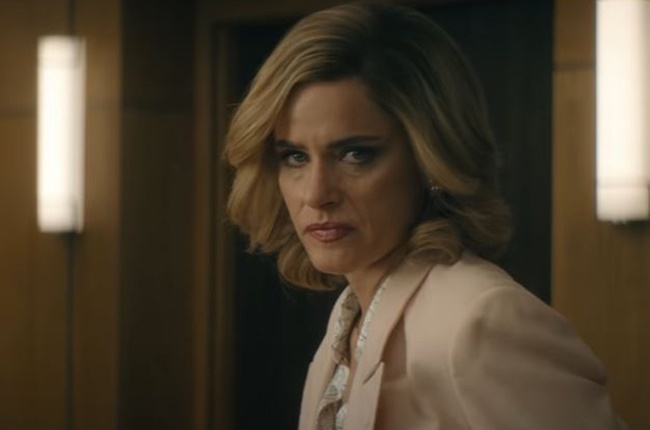 Betty Broderick hits a homicidal boiling point during a bitter divorce from her unfaithful husband.

True crime stories have become a huge hit on the television circuit - real people driven to acts of cruelty, and the motives behind them have become the soapies of the streaming age. "Based on a true story" is a titillating seduction of the audience, promising a sneak peek into a broken mind that no one else has been privy to, some secret gossip that's just between you, millions of other viewers and the producers.

Dirty John: The Betty Broderick Story is just another one churned out by the machine - an unfaithful husband, an unhinged ex-wife and the loved ones caught in the crossfire. It probably won't win awards like its predecessor - The John Meehan Story - but if you're looking for a story about manipulation, scandal, psychiatric breakdowns, court hearings and murder, cuddle up with Betty and her downward spiral into insanity.

Jumbled up chronologically, the story starts with an ex-wife (Amanda Peet) who hasn't quite accepted her divorce from her college sweetheart (Christian Slater). While she seems just crazy in the beginning, the series slowly unravels what led Betty to that point of no return and the effect that manipulation, lies and disillusionment can have on the psyche.

Set in the 70s and 80s, Betty is like so many women from that time - and maybe even today - where they were taught from a young age that the only goal in their lives should be marriage, children and maintaining a welcoming home. All their wants and needs are set aside in favour of men, specifically their husbands, and they're expected to bend to their every whim while remaining silent and pretty.

It's a seductive trap, but Betty is an example of when that illusion of safety is shattered, and everything they were taught to believe is revealed to be a lie. Dan Broderick is a narcissistic, vain man that is blind to the contributions Betty made to his life, and while there is little love lost between him and the audience, I am not sure if the filmmakers wanted you to dislike Betty too.

While you can sympathise with her as a wife blindsided by a cheating husband, it all ends when you look at her as a mother. She cares for her children, deeply, but it's overshadowed completely when it comes to her relationship with their father. She can't break out of her obsession to see how badly it's affecting her children, and that they really would rather stay with her than their father. They are the real victims of this whole messy saga, used instead as pawns by both parents and unwillingly involved in their drama.

There's a sad conversation her one son has with her on the phone, begging her to stop her abusive calls so that they can stay with her again. His pleas fail to break through her fury, and the worst is when the dad consoles him, then walks to the desk where the entire conversation was recorded, relayed to his secretary to transcribe for the court. I really hope the real children are thriving somewhere far away from the sins of their parents.

I'll admit I am not a true crime fan - at its heart, I find it sensationalism of a real personal tragedy that's not useful for the public good - but the Dirty John series highlights the prisons that many women find themselves in. If it helps one viewer see the deadly red flags in their own relationship, I guess it serves an important purpose.

I also appreciated how they portrayed the 'other woman' in the series. She really is just someone who fell in love with the wrong guy, and at some point, I do wonder if she wasn't also just being manipulated like the wife. Betty's crazy infects her as well, and again shows how you're never angry at the one who should have been faithful in the first place.

The Betty Broderick Story remains a soapy, scandalous affair that does hook you into its gossipy claws. The jangly chronological telling is a bit of a seesaw, while your sympathy for the main character slowly dwindles until the final climax. There are no winners, no happy endings, but your curiosity keeps you tuned in.