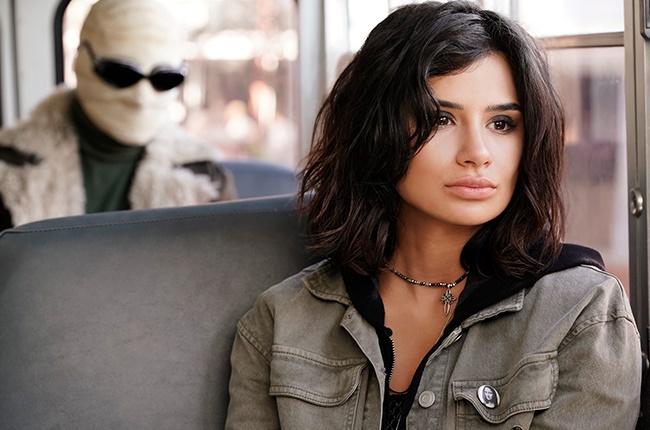 A team of traumatised and downtrodden superheroes band together to save their leader and save a world that wants nothing to do with them.

Within the first 20 minutes of the pilot, we see a man being experimented on, Brendan Fraser's naked backside and a lot of snark. This is how we are introduced to the craziness that is Doom Patrol. And quite frankly, I loved every minute of it!

Just like Mr Nobody who moves between realms and dimensions, Doom Patrol doesn't stick to only one genre. You will be laughing out loud one moment and on the brink of tears the next. The story is classical and traditional, the characters are brass and crazy and the dialogue is extremely witty. It's a wild ride. In one episode, we witness a family get involved in a fatal car accident and a donkey creating a portal with a fart. It's crazy, it's zany and it keeps us on the edge of our seats the entire time.

The series is based on the DC comic books of the same name (the original Doom Patrol were the inspiration for Marvel's X-Men) and features characters many fans of the comics would recognise. There is Cliff Steele (Brendan Fraser/Riley Shanahan), a former NASCAR driver who was involved in an accident which results in his brain being put into a robot body. The team also comprises Rita Farr, a former Hollywood actress whose body turns into gelatin when she is stressed, Jane, a woman with 64 different personalities, each with its own powers, and Larry Trainor (Matt Bomer/Matthew Zuk), a former pilot with a negative energy entity living inside him.

The team is lead by Niles Caulder/The Chief (Timothy Dalton), a mysterious man in a wheelchair who works with these special cases so that they can be let back into the world again. And then there is Eric Morden/Mr Nobody (Alan Tudyk), the main villain of the season as well as the narrator.

The narrator is one of the coolest parts of the series. More Deadpool than traditional X-Men, Mr Nobody often breaks the fourth wall and influences the story, he is an unreliable narrator, often adds in his own judgements and doesn't even try to hide his opinions. It's refreshing. Like the narrator, the show has a sense of self-awareness about it. It knows who it is and doesn't pretend to be anything else. It's strange, it's emotional but never, ever takes itself too seriously.

Another thing that makes the show work is the characters. They all come from different eras, have extremely different backgrounds, and even their powers don't seem to be in sync with each other, but yet their chemistry bounces off each other. They seem like a ragtag group, they act like one and each conflict between the members seem realistic and legit. Even the addition of Victor Stone/Cyborg (Joivan Wade) in episode 2 feels seamless.

The struggle that many superhero TV shows face is how to balance the emotional impact with the camp and the action. For example, The Flash can sometimes lean too much to the camp side, and Arrow was action with a sip of care. However, in Doom Patrol, you are confronted with the characters' inner demons.

You literally feel Jane's exhaustion as she switches between her different personalities, you feel Cliff's pain and regret over what he did to his family, you yearn for Rita's lost career, and you feel conflicted about Larry's double life with him. It is a result of powerful storytelling, and the writers have done such a great job of finessing this balance.

The acting is top class, and you have to commend the casting directors for the work they did in choosing the perfect actors for these roles. Brendan Fraser's voice acting in playing the goofy but vulnerable Cliff gives the character extra warmth. Diane Guerrero, who has previously demonstrated her talents on Jane the Virgin and Orange Is the New Black, plays each one of Jane's personalties with extreme precision. It is worth checking out.

There has been a lot of talk about superhero fatigue lately, but with the genre ever-changing, I doubt that it will kick anytime soon. Last year's Watchmen changed the way we look at superhero content, and used the premise to tell an important story. Doom Patrol does something similar in that it uses the popular form to tell the story of the humanity of who society considers as outcasts.