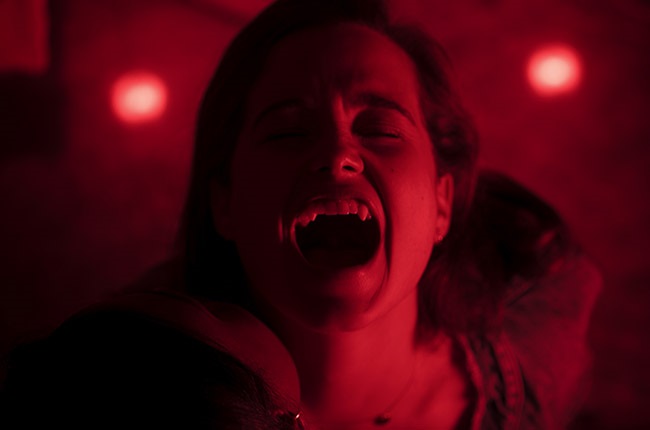 Falling in love is tricky for teens Juliette and Calliope: One's a vampire, the other's a vampire hunter - and both are ready to make their first kill.

First love is an intense experience, especially entangled with the hormones of a teenager. Life experience hasn't dulled the pain of heartbreak yet, and it can be a messy, unbearable emotional rollercoaster. But what if your first love is also someone you've been taught to hate your entire life?

Netflix's First Kill is a Romeo and Juliet re-imagining, but with the addition of ancient vampires and vengeful monster hunters. It has teenage melodrama, young love between two girls, and the cheesiest of supernatural elements. While it smacks of vampire fanfiction, that's not necessarily a bad thing - this is a show created for teenagers, and my teenage self would have loved every minute of it.

First, we meet Juliette (not subtle at all), a young legacy vampire struggling to accept her changing body and thirst for blood. While coping with her family's high expectations, she develops a crush on a new girl, Caliope. However, Juliette doesn't know that Cal comes from a family of professional monster hunters, and vampires are high on their list of targets. Will the two girls' differences stand in the way of their blossoming love?

What makes this show the most watchable from beginning to end are the two leads - Sarah Catherine Hook and Imani Lewis. They are quite adorable most of the time, each making up for the other's weaknesses and exuberant with chemistry. Their intensity for each other, while over the top, never becomes exhausting and quite accurately depicts that first love madness without it feeling like a forced True Love scenario. While they, unfortunately, went to the CW School of Voice Over Acting, complete with awful writing straight from a teenager's diary, their on-screen presence more than made up for it. Hook has an enduring sweetness that you can't help but fall in love with, especially when she's teamed up with her human best friend Ben, and Lewis shines with her strength and determination in her role. These two are what keep you watching beyond the terrible writing, and teenage girls will stan them hard.

I also enjoyed some of the show's adult characters, fleshed out enough for character development and enough insight into their motivations for obviously wanting to keep the girls apart from each other, which refreshingly has nothing to do with them being queer. The mothers - played by Elizabeth Mitchell and Aubin Wise - take the central role among the adult characters, with the dads more in the background, and don't suffer from that stupidity that most adults in teenage shows are afflicted with. Wise especially made me want to cry the most, clearly taking the role to heart, and I almost felt her talents are a bit wasted in this type of schlock.

And oh boy, is there a lot of schlock - but I argue that's a good thing. It has the perfect elements of low-budget supernatural melodrama filled with loveable characters that we also watched as teenagers - the obvious target market. Having adult critics - especially men - punch down on a show clearly not made for them is almost farcical, and we have seen how much anything made for teenage girls is almost always denigrated in media. The LGBTQIA community also doesn't always need serious shows where their identities are a hindrance to whatever plot obstacle. As someone mentioned on Twitter, there is a slew of bad CW shows about straight white people, and queer people also want their bad, guilty pleasure shows. And First Kill ticks all of those boxes.

Netflix didn't set out to make an award-winning show - their brief was clearly inclusive teenage fun with paperback romance at the heart of it, and it delivers on that promise. I would have eaten this show up as a teenager, and I can't imagine what this show means to young queer people looking for a fantasy show where they're the main heroes.

We live in a world where facts and fiction get blurred
In times of uncertainty you need journalism you can trust. For 14 free days, you can have access to a world of in-depth analyses, investigative journalism, top opinions and a range of features. Journalism strengthens democracy. Invest in the future today. Thereafter you will be billed R75 per month. You can cancel anytime and if you cancel within 14 days you won't be billed.
Subscribe to News24
Next on Channel24
Women of the Movement