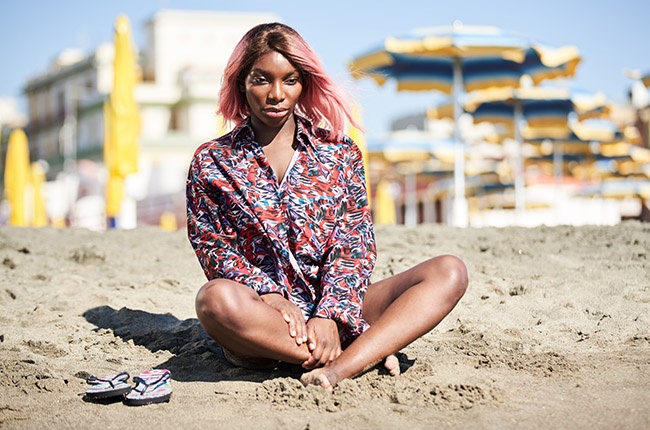 Michaela Coel in I May Destroy You.
Photo: Showmax

I May Destroy You tells the story of a writer Arabella (Michaela Coel) who struggles to remember what happened after a night out with her friends. She later learns she had been raped and drugged. She then has to deal with how this affects her personal and professional life.

You know that feeling when you watch something and it stays with you long after you have switched off the screen? That is what I May Destroy You does. It shocks you, it creeps into the crevices of your mind, and it makes you question everything you thought you believed.

Michaela Coel has been a force to be reckoned with for quite some time. She gained international recognition with her comedy series Chewing Gum, which was based on her play of the same name. While Chewing Gum was expertly funny, it also critiqued cultural norms such as class distinction, hypocrisy in religion and the fetishisation of black women. Coel is excellent at bridging serious topics with well-written comedy. This is why she is often compared to Fleabag's Phoebe Waller-Bridge.

In I May Destroy You, Coel makes it even clearer that she has something important to say. I May Destroy You is based on her own experience of being date-raped, which makes the series even more poignant. And it is not just about her personal experience. She deconstructs and stretches out the concept of consent so much so that we are forced to sort through our own memories for situations where our consent might have been threatened.

After watching it, I wondered if the title might have been a reference to how the show is affecting us, the viewer. Because what makes it so chilling, so scary, and so unforgettable is that it is relatable. Any of the situations that happen to the characters in the show could have happened to you. It has you rethinking previous experiences and relationships and wondering whether various uncomfortable situations you've been in were as a result of someone doing something to you without your consent.

Through the experiences of Arabella and her two best friends - Terry (Weruche Opia) and Kwame (Paapa Essiedu), we explore what consent means, and how easily it is taken for granted. It is not only just the man who drugs and rapes, but it is also the man who tricks the woman into a sexual situation where she doesn't know all the facts; it is also the man who takes the condom off during sex without telling his partner.

Even further than that, it explores the issue of consent in gay relationships, when a man is expected to be masculine or to just put up with what happens to him. An especially difficult scene was when Kwame goes to the police to report a sexual assault which happened to him after a consensual sexual encounter with his attacker. The way he is treated at the police station is both shocking and completely realistic and, as a viewer, you immediately understand why he would walk out and not make a statement.

This is also not a good guy versus bad guy show; most of the characters play in the grey area. At the end of the series, I wasn't even sure if I liked Arabella, Terry and Kwame but I damn-well understood them. One episode had the characters dressing up as angels and devils, and that is such a perfect way to describe that none of the characters were completely good or evil. They all have their flaws. But being a person who is not perfect does not mean you deserve to be taken advantage of, and that is what I May Destroy You is trying to say.

The series also straddles the lines between comedy and drama so well. I would say it leans more toward drama, but because Coel is so good at writing comedy, the instances that do insert humour always lands. I found myself laughing in awkward situations, but it didn't feel inappropriate. The script was such an airtight piece of art that everything felt like it was in the right place at the right time.

That's not even getting to the technical achievements - everything from the set design to the lighting to the costumes was striking and beautiful. It was bright, jarring and kept you entranced. Everything felt deliberate, so that the moment we see the clothes Arabella was raped in again, it is triggering for us too.

When it comes to acting, Coel led and gave her all in this performance. You can clearly see this was a project that was important to her. She sucks you into the world of Arabella, and her performance was so broad but so nuanced that by the end, you are so invested in what will happen to this character.

An important note to make is that even though there are many scenes that are hard to watch, the show itself is extremely interesting and watchable. I found myself wanting to rewatch it as soon as it was over. I wanted to see what I missed the first time around, to pick up on signs and to immerse myself in the emotions again.

I May Destroy You is unlike anything you have watched before. It is both deeply personal and completely relatable. It will make you gasp, laugh, cry and shudder. It is a masterpiece, and Michaela Coel deserves any and all accolades she will receive from this.