Never Have I Ever S2 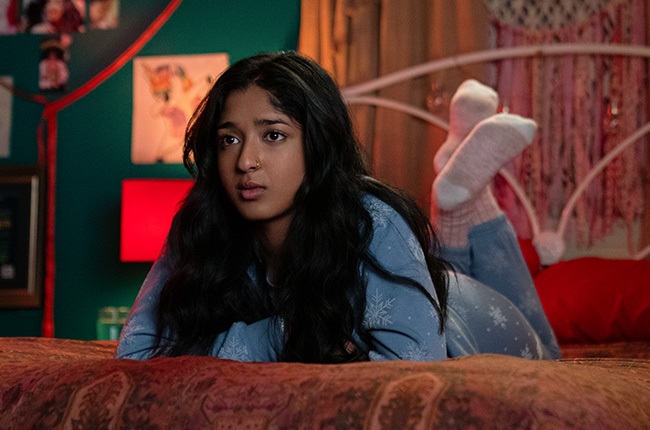 Maitreyi Ramakrishnan in Never Have I Ever.
Photo: Isabella B Vosmikova/Netflix

Never Have I Ever S2

In Season 2 of the coming-of-age comedy Never Have I Ever, Indian American teenager Devi (Maitreyi Ramakrishnan) continues to deal with the everyday pressures of high school and drama at home, while also navigating new romantic relationships.

Never have I ever …related to a show more. Devi, our first-generation Indian-American mess, makes a few more bad decisions, spirals completely out of control and falls into a hot tub from the roof in season two of Mindy Kaling and Lang Fisher's hit teen comedy series.

Some ten years later, a 28-year-old me can laugh, knowing full well I almost lost it in high school watching my crush, crush my dreams every opportunity he got – oh to be young and in love and thinking about your future at the most volatile time in your life. In retrospect, I get it, though, which makes Never Have I Ever my absolute favourite show. The series touches on so many important topics in a new way, there isn't a dull moment, and I can relate to almost everything Devi goes through. Yup, I, too, have taken this long to figure out my eyebrow shape.

Season two of Never Have I Ever kicks off with Devi (Maitreyi Ramakrishnan) having to decide between Ben (Jaren Lewison) and Paxton (Darren Barnet), her mom (Poorna Jagannathan) trying to find her way after losing Devi's dad (Sendhil Ramamurthy) and Kamala (Richa Moorjani) starting a new job. Meanwhile, Fabiola (Lee Rodriguez) just came out. Eleanor (Ramona Young) is mistaking being starstruck for falling in love, and Paxton realises he's so much more than the swim team captain.

Who had the most character growth this season, and why is it, Paxton? (10 marks) But wait, I'm skipping ahead.

There's also Aneesa (Megan Suri). She's a first-generation Muslim Indian-American girl too, which Devi automatically sees as a threat – admittedly, she appears so much cooler – and that really offsets the tension in season two.

Maitreyi Ramakrishnan returns as our catastrophic lead and really 'Devis' things up this season. What I love about Maitreyi is how well she can go from hopeful and mischievous at the start of the season – season two follows much of the same formula as season one – to slouching her shoulders as she sobs on a walk home from school when everything falls apart. Devi couldn't have been better cast; once again, Maitreyi shines as the always-hilarious, often-selfish, but witty and self-assured Devi Vishwakumar. Finally, a flawed, very real, Indian girl on screen, my messy self can relate to.

That said, season two is so much better than season one. Because we've now met Devi, we can dig a little deeper into her story, and the same is true of every other character, namely, Fabiola and Paxton.

After coming out in season one, Fabiola struggles to fit in. While she wants nothing more than to stick to her nerdy roots and spend her time building robots, she also feels a pull towards advocating for the LGBTQI community. She has to find her place in the world on her own terms, and I love the way her storyline concluded in the end.

Paxton is also trying to find himself this season, which sees him looking deeper into his Japanese heritage and focusing a little more on doing good well at school. Smart of our writers to include that random shirtless montage of him fixing a coffee table, though, to really lock me in on Team Paxton.

I also really enjoyed Kamala's storyline – and the not-so-subtle jabs at her racist, sexist boss, rivalled only by the laugh-out-loud desperation of overly woke Mr Shapiro – and Devi's mom, Nalini's attempt at moving on – scrap what I said before, I'm actually Team Chris Jackson played by the man of my dreams, Common.

Andy Samberg also makes a brief appearance as Ben's alter ego, while Gigi Hadid voices Paxton's – both, in my opinion, are spot on. John McEnroe lets us in on all Devi's thoughts, and I don't know if it's the dialogue this time around, but I appreciated the added narration so much more – everything this teenage girl was going through just seemed so much funnier in the voice of John McEnroe. Now, I can't wait to see who will voice Eleanor's alter ego – I do hope we get to see more of her in season three.

Having said all that, yes, a lot happens this season on Never Have I Ever, but the quick progression makes it exciting; you won't stop laughing – it's a total binge-worthy watch. My only regret was actually getting through it all in one sitting and realising I probably have to wait a whole year for season three. And there's so much story left to tell!

We all want to know, will Devi finally get her full high school boyfriend experience? Will she manage to juggle it all and still get into Princeton? And will that hyaluronic acid from Dr Jackson do wonders for her combination skin? Okay, that last one is just me, but never have I ever …been more excited for a season three.

We live in a world where facts and fiction get blurred
In times of uncertainty you need journalism you can trust. For only R75 per month, you have access to a world of in-depth analyses, investigative journalism, top opinions and a range of features. Journalism strengthens democracy. Invest in the future today.
Subscribe to News24
Next on Channel24
Normal People