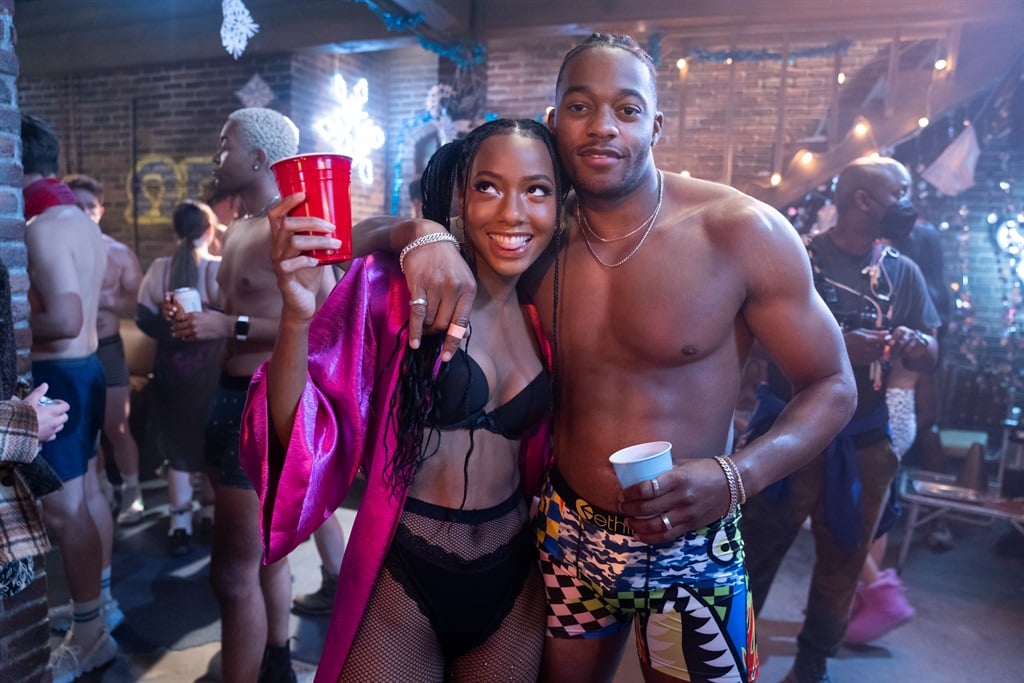 Alyah Chanelle Scott as Whitney and Christopher Meyer as Canaan in The Sex Lives of College Girls.
Photo: Showmax

Four roommates navigate their new freedom on the prestigious campus of Essex College.

The second season of Mindy Kaling's The Sex Lives of College Girls is on Showmax, and Whitney, Leighton, Bela and Kimberly are making some bad – no, worse – decisions in season two as they live out the best years of their lives. By that, I mean as good as it can get, you know, while hooking up with your archenemy, getting the clap, cheating on your boyfriend and selling your eggs, all while attending a rager every other weekend. Season two of The Sex Lives of College Girls is wild – and thoroughly entertaining.

Season two picks up after Thanksgiving break and sees the four roommates reunite. Whitney is finding her identity outside of being a star athlete – I see the writers gave her a little more to work with this season – while Leighton, having just come out, is trying to "catch up" and sleep with just about everyone on campus. Kimberly, having lost her scholarship, is looking for a way to pay her tuition so she can stay at Essex, while Bela is all too keen to leave by the end of this season following a series of bad – nah, truly horrible – life choices.

Mindy Kaling is so good, in her TV offerings of both Never Have I Ever and The Sex Lives of College Girls, at telling the stories of characters – diverse characters, that is, that may not have been told before – that are charming but far, far from perfect. Whitney, Leighton, Bela and Kimberly are all lovable, and they don't only make you smile; they make you laugh. But again, they make poor, poor decisions that will infuriate you – like sleeping with their super hot neighbour, 'climate refugee' Jackson (who comes to Essex after his home was destroyed in Kansas; yup, he migrated within the US, so he's not really – not at all – a refugee).

While the show is a comedy, it doesn't shy away from some really big themes, including identity,  representation, sexuality and more – and in a way that's accessible, if that makes sense. You don't have to think long and hard about what's happening, and you still come away from the show feeling lighter, despite all the drama our four girls are going through, making for some entertaining, binge-worthy TV. "Excuse us for being messy bitches who love drama!"

All four actors – Alyah Chanelle Scott (Whitney), Reneé Rapp (Leighton), Amrit Kaur (Bela) and Pauline Chalamet (Kimberly) – have been perfectly cast, but this season Rapp and Chalamet give stand-out performances, though I do feel it has a lot to do with their characters, their storylines and their likeability. Kimberly's character allows Chalamet to show off her comedy chops, while cold and sometimes selfish Leighton goes through the most character development compared to Bela, who was just difficult to watch. But I can't go into too much detail without giving it all away. Let's just say there's a lot of redeeming to be done come season three, but if ever there were characters that could pick themselves up again after catastrophic collapse, it's this fun and lovable, gawky little bunch.

So here's to hoping there's a season three, with more striptactulars – you know, for climate change...

Where to watch: Showmax

We live in a world where facts and fiction get blurred
In times of uncertainty you need journalism you can trust. For 14 free days, you can have access to a world of in-depth analyses, investigative journalism, top opinions and a range of features. Journalism strengthens democracy. Invest in the future today. Thereafter you will be billed R75 per month. You can cancel anytime and if you cancel within 14 days you won't be billed.
Subscribe to News24
Next on Life
REVIEW | The Recruit has an addictive quality propelled by Noah Centineo's lovability