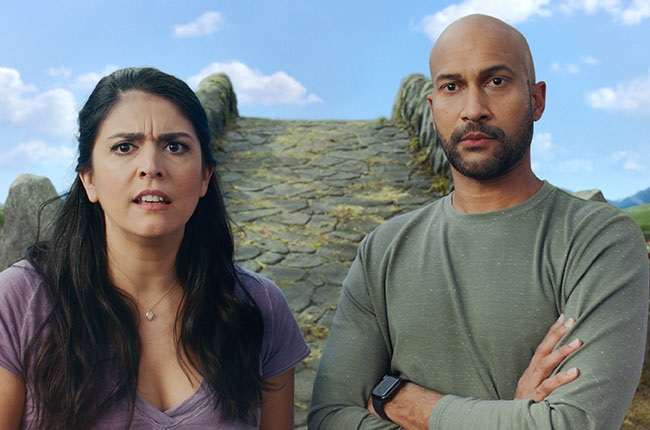 Melissa and Josh, a couple who have reached a rough patch, go on a backpacking trip to patch things up. They get lost and discover a magical town called Schmigadoon that is stuck in a Golden-Age-style musical, and the only way they can leave is if they find true love.

With the pandemic sweeping over most of the world, most people have not had the opportunity to watch live theatre. Schmigadoon is the closest thing you might get to a musical theatre production, and it does not disappoint. With beautiful sets, catchy songs, and a cast that would rival any Broadway production, Schmigadoon is a well thought out satire piece with a lot of heart.

When we meet Melissa (Cecily Strong) and Josh (Keegan-Michael Key), their relationship is already in jeopardy. Through a series of flashbacks at the beginning of each episode, we learn what brought them to the point that they are now. While hiking on a couple's retreat, the two bicker and get lost until they stumble upon the town of Schmigadoon. Schmigadoon seems stuck in a 40s/50s musical. When Josh and Melissa attempt to leave Schmigadoon, they are stopped by a leprechaun (played by Martin Short), who tells them they can't leave until they find true love. And although they seem to think they are in love, it doesn't work, which causes them to break up and try and find love with other people in the town.

What makes Schmigadoon brilliant is that it elegantly straddles the line between satire of the genre while still respecting it and staying true to what fans love about it. There is an immense amount of heart to the story, and the episodes are still light and funny and cheer you up in a way that only musicals can. The series does not shy away from the more problematic aspects of old school musicals, such as the onus put on purity and traditional values, misogyny and the fact that queerness is just alluded to and not said outright. The interesting concept behind this is what would happen if we put people from 2021 into an old school musical? How would they adapt? How would they survive? And how would they change things? And it is nice to know that the experience of Schmigadoon will not only change Melissa and Josh, but Melissa and Josh will also change how the inhabitants of Schmigadoon will think about things like gender equality, gay rights, and acceptance of those who are different.

The cast includes popular theatre actors such as Kristin Chenoweth as the priest's puritan wife, Alan Cumming as the mayor, Aaron Tveit as the town's rapscallion, Ann Harada as the mayor's wife, Ariana Debose as the school teacher. The series also features comedic actors like Fred Armisen as the priest, Jaime Camil as the town doctor, and Jane Krakowski as a rich countess. And even though the cast are almost all recognisable names and faces, it does not take away from the magic and charisma of Schmigadoon. Stand-outs for me were Tveit, Debose and Harada, who played into the campness of their roles while still making it seem compelling, comedic and authentic.

The series has an array of original songs; some are spoofs of popular musical songs, such as a version of Do-Re-Mi that teaches about childbirth. The songs are incredibly catchy, and I found myself singing along to Cord Puddin long after I had switched off the episode. And performed by the talented actors that make up the cast, makes every song a feast of entertainment.

When Melissa and Josh arrive in Schmigadoon, Melissa is thrilled because, as a fan of musicals, she understands the world and knows how to navigate through it. On the other hand, Josh is lost and does not see the appeal of the magical land. So if you are like Melissa and are a fan of the genre, you recognise inside jokes, get references and enjoy the ride, and if you are like Josh, you might find it annoying and will feel lost at times.

Schmigadoon is not for everyone but for those who enjoy and appreciate the genre; it is a touching and exciting show to watch.