Self Made: Inspired by the Life of Madam C.J. Walker 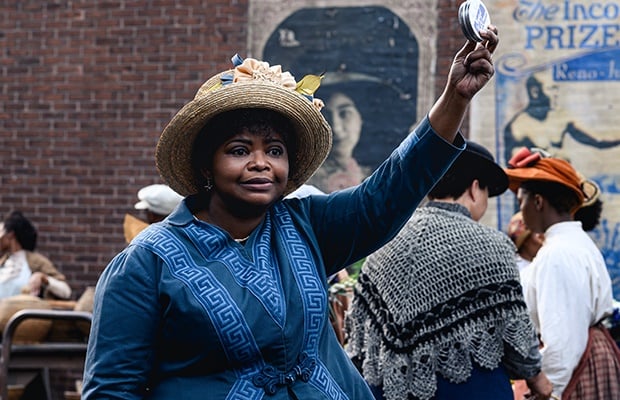 Inspired by the book, On Her Own Ground written by Walker’s great-great-granddaughter A’Lelia Bundles, the Netflix original series, Self Made: Inspired by the Life of Madam C.J. Walker brings the uplifting story of this cultural icon to the screen for the first time. Against all odds, Walker overcame post-slavery racial and gender biases, personal betrayals, and business rivalries to build a ground-breaking brand that revolutionised black haircare, as she simultaneously fought for social change.

When I first heard about the series Self Made: Inspired by Madam C.J Walker, the first black female millionaire, I was excited. We don't get to see many stories like this based on real-life figures. But by the time I had finished the four-episode special I was disappointed.

Madam Walker's life and what she achieved was remarkable, but the creative license the narrative took for entertainment value left me with mixed emotions.

The driving narratives in the series are colourism and her ongoing rivalry with her light-skinned, wavy-haired nemesis Addie Malone (Carmen Ejojo).

Just do some quick research, and you will soon learn that a lot of the story is fiction and that the extent of the 'rivalry' wasn't as ugly as the story makes it out be. In fact, the woman Addie Malone is based on Annie Malone, who was a millionaire herself.

And herein lies my main problem with the story. We don't need to break down one black woman to uplift another. There is space for both of their stories to exist, and it doesn't have to be this unpleasant fictionalised take.

And yes, I know that the tagline says 'inspired by' but I do feel that when stories about historical figures are told, there has to be truth in it. If I have to Google to find out if most of the story is true, it's a bit off-putting.

For many of us who are not Americans, this would be our first time encountering the story of Madam Walker and from what the history pages say she is also far more than what the series portrays. She was a philanthropist, a civil rights activist who the FBI spied on, and much more. These little details alone make more exciting viewing than what we were shown in the series.

Madam Walker's great-great-granddaughter A'Lelia Bundles who wrote the book the series is based on said in an interview she was "disappointed that the script defaulted to Madam Walker and Annie Malone cursing and fighting each other". "It felt like a cliched way to show their competition with each other."

Of course, you can't tell a life story in four episodes, and at some points, it felt very rushed, particularly the last episode, as if they were racing to the finish line.

If you are watching this series as a work of fiction then it ticks all the right boxes: It has a villain, a cheating husband, she has all the odds stacked against her, but she rises and perseveres despite that.

When it comes to the acting, Octavia Spencer gives a believable performance; you can't help but root for Sarah. Carmen Ejojo is a formidable foe, and Blair Underwood has perfected the role of a bad spouse.

Two standouts for me are Kevin Carroll who plays Freeman Ransom and Garret Morris who plays Cleophas. They deliver wonderful performances as Sarah's allies.

With all that said Madam C.J. Walker deserves more than a watered-down fictionalised take on her life.