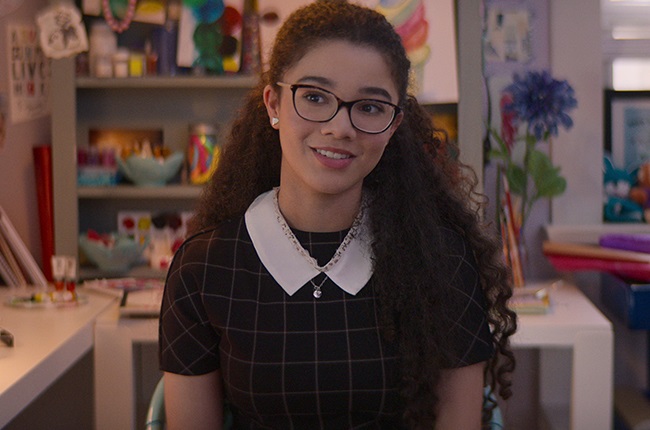 The second season follows on from the events of the first season and has our favourite babysitters dealing with parental, boy and personal problems.

I struggled to think of ways in which The Baby-Sitter's Club could have improved on its excellent season one. But season two has set its own precedent by delving into the characters and allowing them to grow. While in season one, the show's aim was to introduce us to the characters and establish the club, this season gave them more opportunity to play in that arena. The result was an even more heartwarming and exceptional season.

The young cast, while talented, seem more comfortable in their roles this season. They have had time to move around in their characters, understand their motivations, and get to know the other actors better. The chemistry between them is so palpable that you, as the audience, believe that they are best friends. While we did have some great scenes with the whole group, this season also had some great team-ups between characters like Kristy and Stacey, Mary Anne and Jessi, and Claudia and Mallory that provided a new dynamic. I couldn't help but also admire how the cast has improved their comedic timing; I felt like this season was funnier because the actors were better at understanding the synergy between each other and the production.

There are some changes to the Baby-Sitters Club (BSC) that we saw in season one. Firstly, Kyndra Sanchez replaces Xochitl Gomez as Dawn Shafer. This is winked at in the first episode when Dawn said that after spending the summer in Southern California, she "feels like a new person". Gomez had to exit the series because of scheduling difficulties with Doctor Strange and the Multiverse of Madness, where she plays the role of America Chavez. But Sanchez does a great job as Dawn and seamlessly fits into the group as if she had been there from the beginning.

The club also initiated two new members - Jessi (Anais Lee) and Mallory (Vivian Watson). Both characters appeared in the first season and had the opportunity to move into the spotlight in the second season. Jessi, in particular, had a strong episode about moving from being a big fish in a small pond to becoming a small fish in a big pond. In Stoneybrooke, Jessi was known as a talented ballet dancer, but once she gets into a prestigious ballet school, she learns that she is now one of many talented dancers. She has to grapple with not being the best and to remember why she loved ballet in the first place.

Mallory, while being a polarising character in the books, has a similar energy in the series. She is enthusiastic and loves talking about her horse stories but is unsure of herself and keeps putting her foot in her mouth. But the show does treat her with a certain amount of tenderness, allowing the audience to see how being a child from a big family has affected her, how she struggles to discover her own personal identity, how she is scared of being viewed as charity. It makes the character more sympathetic and less of an annoying horse girl.

We also get to see more of the girls' parents this season as they go through their own struggles. Liz (Alicia Silverstone), Kristy's mother, is dealing with whether to have another baby with her new husband, Watson (Mark Feuerstein), and they undergo fertility issues. Mary Anne's father Richard (Marc Evan Jackson) and Sharon (Jessica Elaina Eason), Dawn's mother, are trying to progress in their relationship (hopefully marriage is on the cards) but are moving at a slower pace than their daughters are ready for. Stacey's parents are not given as much screen time, but they seem to be having marital problems.

The second season followed the first season's lead, whereby each episode is narrated by and told from the perspective of a different character. The books worked in a similar way, and the writers took the popular storylines from the books and reworked it for a modern audience. The Baby-Sitter's Club has managed to successfully straddle the line between appropriate and relatable for the audience that it was created for and entertaining and worthwhile for those who grew up on the books or previous iterations.

Once again, the show was able to weave through various storylines such as grief, parental abandonment, health problems with slightly lighter topics such as fitting in, getting along with people that are different to you, and boy problems. At the end of the first season, Mary Anne and Logan (Rian McCririck), a classmate, kissed while they were on a camp. This season has Mary Anne trying to navigate the waters of her first romantic relationship, aided to varying degrees by her friends. This is treated so delicately and has exactly the right amount of growing pains and awkwardness that one would expect when a shy character is the first of her friends to have a boyfriend. The scene when they are having lunch with the other couples in their grade is so perfectly hilarious.

The crux of The Baby-Sitters Club is the power of female friendships. Too often, the stories of children and preteens are pushed aside as trivial, but the Baby-Sitters Club shows the strength of having your friends surround you when you are grieving, when you need to be reassured that you are loved, when you need support, and it does not matter your age. This is an extremely stunning piece of storytelling and remains one of the best written young adult shows available.

We live in a world where facts and fiction get blurred
In times of uncertainty you need journalism you can trust. For only R75 per month, you have access to a world of in-depth analyses, investigative journalism, top opinions and a range of features. Journalism strengthens democracy. Invest in the future today.
Subscribe to News24
Next on Channel24
You S3