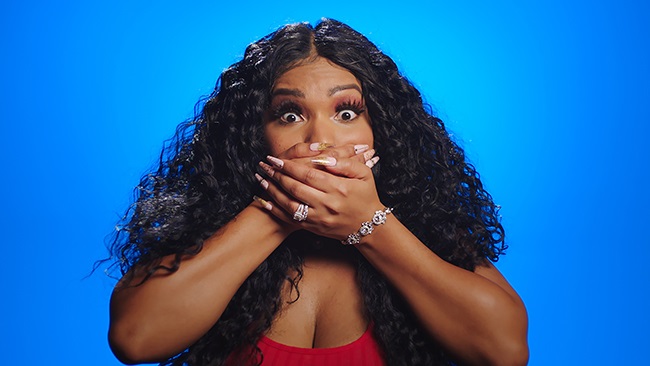 Deleesa has a secret. But can she keep it? (Photo: Netflix)

A cast of eight new contestants enter The Circle, where they flirt, befriend, piss off, and compete in challenges against each other on a unique social media platform to earn the ultimate cash prize as top influencer. With $100k on the line, will they be able to earn clout and figure out who is real and who is a catfish?

At first, Savannah was definitely in my top two. But then, after what happened between her and Terilisha, I changed my mind. Even Chloe has started to grow on me. This wasn't the case in episode one. Then there's River. Oh, River. Sweet thing. (Cry emoji)

I thought I had it all figured out. Then Lance Bass entered the game. (Mind blown emoji)

All this drama, and we're only on the fourth episode. #GirlGang

Back in January 2020, Netflix introduced us to a new reality TV show titled, The Circle. Back then, I described it as "Big Brother meets Love Island meets Instagram". Instead of one house, the contestants each live in their own apartments. They never get to meet each other face-to-face and can only communicate via a social media network called, you guessed it, The Circle.

Oh, don't worry. I was one of those who thought I was better than gimmicky reality TV shows too. It turns out I'm not. I wasn't going to bite, but then my co-workers started having conversations, and debates, and WhatsApp group chats about the new season. So, I decided to watch the first episode. A few hours later, I had devoured all four episodes available.

It's addictive. Once you start, you're not going to be able to stop because every episode is packed with twists, turns, and shocking surprises.

The Circle is about life in isolation, and it's being broadcast during a worldwide period of isolation. Yet, weirdly, it's creating a sense of community, connection, and inclusion. It's a powerful conversation starter when we're all still stuck indoors with very little happening in terms of life as we know it. Each "character" (because not everyone is who they say they are) has something interesting about them, is hiding something, or is playing the game strategically. All of this will get you talking. It's a diverse and fun group of contestants that are entertaining to watch.

The new season comes with some new changes, rewards, and challenges. Alliances are quickly formed (hello Survivor?), romances start budding (Bachelor that you?), and celebrities get exposed (Uhm, Masked Singer?).

I'd say watch it but get ready to get hooked. New episodes drop 21 and 28 April with the finale available on 5 May.

We live in a world where facts and fiction get blurred
In times of uncertainty you need journalism you can trust. For only R75 per month, you have access to a world of in-depth analyses, investigative journalism, top opinions and a range of features. Journalism strengthens democracy. Invest in the future today.
Subscribe to News24
Next on Channel24
Tomorrow with You

Read more on:
the circletv
You've got mail!