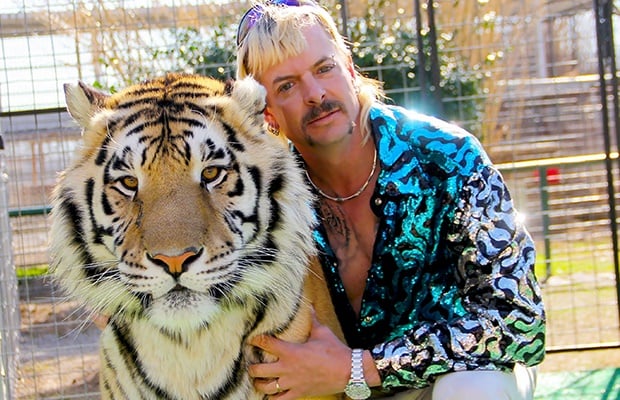 Tiger King follows the life of eccentric roadside zoo owner Joe Shreibvogel, known as "Joe Exotic". The seven-part docuseries exposes the crazier-than-fiction world of this big cat owner, and the events that would eventually lead him to hiring a hitman to take out his rival, animal rights activist, Carole Baskin.

"Nikita, we just added a docuseries you might like", read the subject line of the marketing email I received from Netflix. It was a common occurrence, but this time I thought, "Okay, I'll bite."

Little did I know I would spend my entire weekend binge-watching this series.

Tiger King is marketed as a show that follows the life of Joe Exotic and details how he eventually ended up behind bars for trying to have his rival, Carole Baskin, assassinated. That alone was enough to lure me in.

But to my surprise, it was so much more than just a series about a murder-for-hire plot.

There's polygamy, drug lords, cults, arson, murder, and even rumours that someone was fed to a tiger. Your favourite soapie could not even make this stuff up.

While the seven-part series focuses mainly on the life of Joe and his ultimate dethronement as the Tiger King, we also get a glimpse into the world of big cat owners in the US.

According to the series, America has more tigers in captivity than there are free in the entire world. It's a crazy thought. Joe alone, had over 200 big cats at his place, the G.W. Zoo, in Oklahoma.

Throughout the show, we're also introduced other big cat owners, like Bhagavan "Doc" Antle and Jeff Lowe, and who are just as eccentric as Joe.

Between them, these businessmen have hundreds of animals in captivity – including lions, chimps, tigers, panthers, bears, and even an elephant.

Of course, tigers are the biggest attraction, and breeding and cub petting, which is frowned upon by animal rights activists, form a large part of this lucrative industry.

The circle of big cat owners is tight, and they seem to have one common enemy – Carole Baskin.

Carole is introduced as the owner of Big Cat Rescue – a sanctuary for big cats who have been rescued from dire situations. She is referred to as "the Mother Theresa" of big cats and looks the part.

For years, Carole and Joe, have gone back and forth, spewing accusations at one another, and spending millions in legal fees as they lawyer-up to fight a never-ending battle.

Joe is framed as the crazy man who keeps tigers in cages, trades them illegally, breeds them, and charges unsuspecting customers large sums of money to play with them. All the while, Carole in on the other end, trying to pass a law which would prohibit the ownership of big cats by individuals.

Picking a side here seemed easy. I'm completely against people who exploit wildlife for financial gain. Seeing hundreds of tigers kept together in such small spaces, and watching a cub being ripped from its mother's side seconds after birth to be petted and played with for pictures, turned my stomach inside out.

While every great show needs an antagonist and a protagonist to keep you locked in, those lines quickly became blurred here, which made it even more captivating.

Carole, herself, has a dark past, which includes being suspected of murder. And in between the moments of crazy, there are glimpses of a more vulnerable Joe. By the end of it, picking out the villain in this lineup becomes a lot harder.

Is Carole as innocent as she seems? Is Joe just a misunderstood soul in search of himself?

You'll have to watch and draw your own conclusions.