Really excited fan. (Photo: Supplied/WWE)
Alongside WWE Raw and Smackdown, this weekend’s main event, Money in the Bank is set to welcome the return of an all-time legend, the fans.

The days of hosting WWE fixtures at the Thunderdome are fast coming to an end. Since the height of the global pandemic, WWE has not missed one week of production and has been airing their shows with only virtual fans in attendance.

WWE will always be the home of star-studded entertainment. The Rock, Steve Austin, Becky Lynch, John Cena, The Undertaker and Sasha Banks, will forever be remembered as WWE legends but WWE would not be the same without its fans – fans who bring as much entertainment to our TV screens as the Superstars.

When it comes to WWE fans, we’ve seen it all, the look of disapproval, the tears of happiness, "Ringside Charlie", the WWE fan who's been to every single WrestleMania, and whether it’s Montez Ford dancing with a baby or Angel Garza kissing a fan mid-match, these iconic fan moments should all be in a WWE Universe Hall of Fame.

From the "Hate Cena Guy" to the "Really Excited Fan" whose mushroom-shaped hair shook with excitement, fans have always been an important part of WWE, some have even become minor celebrities in their own right. With fans returning to our screens, let’s take a look back at some of WWE’s superfans as we prepare for the return of the WWE Universe:

Bayley’s Biggest Fan (Izzy): Bayley started in WWE as a big part of NXT and she usually had Izzy at ringside as her biggest fan. Izzy is a little bit older now, but she’s still a super fan. In fact, she has her eyes on becoming a WWE Superstar. Sign Guy (Rick Achberger): Who has openly said he is obsessed with WWE. He watches all the shows each week and attends about 30-40 Live WWE events across the state. He brings about 15-20 signs, wears the same red cap and blue shirt, just to rial up the Superstars. Shocked Undertaker Guy (Ellis Mbeh): When The Undertaker's 21-match undefeated WrestleMania streak came to an end at the hands of Brock Lesnar, fans in attendance at WrestleMania 30 and watching around the world shared the same reaction: pure, unadulterated shock. But it was WWE fan Ellis Mbeh whose eyes-bugging-out, face gnarled expression was perfectly caught by the company's cameras. Mbeh immediately became a meme on social media as his reaction perfectly summed up the complete and utter surprise of Lesnar ending "The Streak," something many thought would continue for the duration of Taker's career. Angry Miz Girl (Caley): Sporting a Randy Orton shirt and a scowl, one 9-year-old girl came to Raw as a WWE fan and left an icon. When The Miz successfully cashed in his Money in the Bank contract on Orton in November 2010, everyone’s jaws dropped. After the three-count and Miz’s music hit, though, cameras caught a girl in the crowd steaming like a tea kettle. Cayley booed and gave a double “thumbs down,” but her epic frown drew the most attention. Tye Dye Guy: Don’t be fooled, that isn’t Hulk Hogan hanging out ringside of over 500 WWE shows. Though he’s got the same well-tanned complexion as The Hulkster, and an affinity for psychedelic prints, "Tye Dye Guy" is, perhaps, one of the most recognizable wrestling fans ever. Vladimir Abouzeide: WWE presented superfan Vladimir Abouzeide with their first-ever WWE Superfan award during night one of WrestleMania 37. You might not know Vladimir Abouzeide by name, but to any longtime viewer, his face is almost as recognizable as Shawn Michaels’ or John Cena’s. That’s because, for more than 30 years, Abouzeide was a fixture at ringside in WWE’s home arena of Madison Square Garden - sitting in the front row, a grin spread ear-to-ear as he cheered on his favourite Superstar. So much so, WWE Network Documentaries will shine a light not on a famous Superstar or Legend of the ring, but on one of WWE’s most devoted fans in Superfan: The Story of Vladimir. 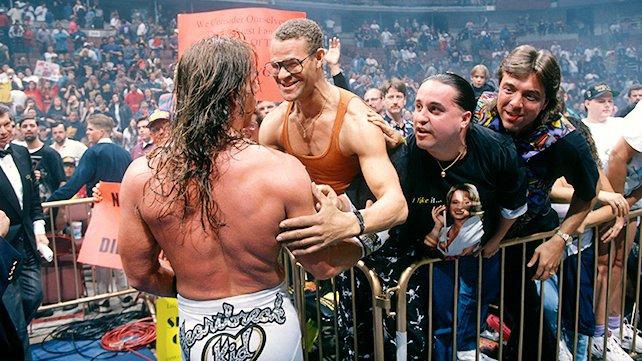 While South African’s still face a hard-national lockdown, WWE cannot wait to ignite that sense of nostalgia and welcome fans back to your screens starting with Smackdown (16 July), Money in the Bank (18 July 18) and Raw (19 July).

With a weekend filled with pure entertainment and two jaw-dropping Ladder Matches confirmed for the upcoming WWE Money in the Bank, we are guaranteed to witness incredible fan moments. Don’t miss the back-to-back action live on SuperSport WWE (DStv 236) and WWE Network from 23:00.

We live in a world where facts and fiction get blurred
In times of uncertainty you need journalism you can trust. For only R75 per month, you have access to a world of in-depth analyses, investigative journalism, top opinions and a range of features. Journalism strengthens democracy. Invest in the future today.
Subscribe to News24
Next on Channel24
Set your alarm clocks as the NBA finals tip off on ESPN - here's when and where to watch it!