Jason Brookstein is Survivor SA's first man out: 'I was backed into a corner' Jason Brookstein (27), an engineering draughtsman from Johannesburg, became the first castaway in Survivor South Africa: Immunity Island to be cast away from the Zamba tribe in the first episode when he appeared oblivious to – and got blindsided by – the alliances being created all around him.

SEE HIM GET VOTED OUT HERE:

In this Q&A, we ask Jason what his short time on the show was like, find out where he thinks he went wrong and whether he saw Renier point at him.

You didn't stay long but what was your experience like?

The experience was absolutely amazing. Nothing less. The way that I had pictured it in my mind – I'm a very visual and artistic person, and I picture things – and the way I pictured it and imagined myself in the situation, and when I got there...it was just the right feeling; it was amazing. It was good and bad.

You said during the end credits that you maybe made a mistake in asking too much information too quickly. Can you elaborate on what you think you did wrong?

Look, the situation that I was dealt with - being the fire challenge and the immunity challenge - that is just one personality. I was backed into a corner; I had to fight the way I did. I think I fought a pretty good fight. In terms of information, I think information is definitely key and how you use that information is very important.

When you get information, there are so many things to consider. I would say that my mistake was – or if I had to change anything of my strategy – it would be to speak less and listen more. 'FLOAT LIKE A BUTTERFLY...' Jason wanted to be the best Survivor player in history.
Photo: M-Net

Did you see Renier do the finger-pointing behind your back meaning "we're voting for him", or did you really not notice that, and when you watched the episode, what did you make of this?

You know, thinking about it now, when I saw that moment, I thought that Renier was standing a little bit weird. It was a very odd position to stand in. I mean, are you relaxing, are you scratching your head, are you not agreeing with me? But not once did I consider that that was going on. It's funny to see something like that. It's a very bad moment, but it's content. I see it.

It was his opportunity to get information. You don't understand the timeframes you're dealing with –the pace you're moving at. It's so fast. It's not him being a bad person or anything. That's how fast things are moving. Things are moving that fast a pace. That little moment – he jumped, he took it. Listen, I commend it; I respect it. I'm a fan of the game; I can take it. Well done.

Some of the castaways also remarked that people shouldn't set forward as a perceived "leader" too quickly. Yet you took charge building the shelter being an engineering draughtsman. Do you think it made you a bigger target?

I was aware of that. I will say this. Look, as you can see, we have a relatively young cast. Some people's backgrounds crossed somehow and whatnot.

It's crazy how there were yoga people, and there were people like Survivor fans and doctors. It's crazy and fun. It was interesting; for me, it was an eye-opener in terms of, "Sho, we need to put social media down and look around to see what's happening around us."

I don't know Dino, but I was aware of him. I know he's a superfan because I'm a superfan, and I know of him, but I don't know him. So, my thinking was that I thought that he would know that I was the structural engineer and draughtsman. That's not the role that I wanted to play. Yes, I'm a rough person; I'm an outdoors type of person. I have a nursery. I'm in the bush – that's me.

I understand that type of role would have been given to me just based on my appearance. But if I said I wasn't a structural engineering draughtsman, I was scared that Dino would call that out. So I kind of had to take that role unwillingly, and Renier spotted that. AND THEN THERE WAS FIRE: Jason and Chappies during the fire making challenge.
Photo: M-Net

Looking back, what did you notice that was interesting?

It was amazing – I wasn't really aware of how I think if that makes sense.

It's fun to see that side of you because you become more aware. It was very clear to me that my personality and how I think – I mean, I'm an achiever. That's what I do. I can see why I was cast. I've never had that opportunity to see that side in the working, and it was quite cool, I won't lie. It was amazing.

It also looked as if you struggled in the team challenge with the swimming once you got back out of the water and took the few steps to the Zamba castaways. You crawled to the line. What happened there?

Yes! Yes! I want to talk about that!

I would love to talk about that. So, in that Survivor SA episode, I would like M-Net viewers to pause as soon as I come out of the water. I come out with one shoe.

I didn't tie my shoes properly because it's foreign for me to swim with shoes on. I know it's not an excuse, but this is why I was tired and why I looked so drained. So I jumped into the water, with this sensation of trying to keep this shoe on, and then, okay, you know what, toss the shoe.

I'm not unfit, but that was a whole lot, and it was really draining. As soon as I got out of the water, I was finished. That's just how brutal these games are. But it was crazy, but that was my fault for not tying my shoes properly. It is what it is. 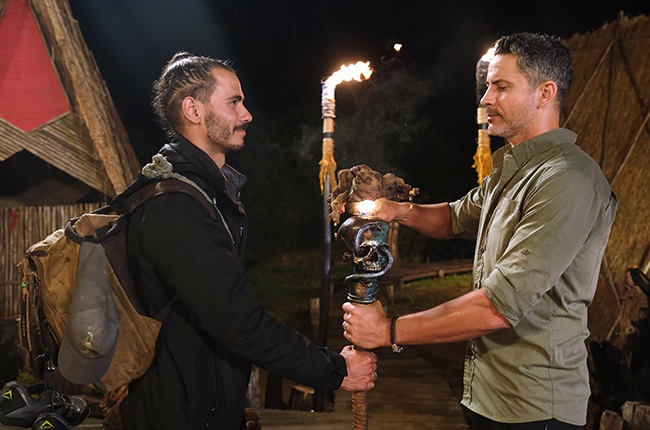 THE TRIBE HAS SPOKEN: Jason's torch is snuffed out.
Photo: M-Net

It's so tough and brutal, and you sat in the rain at tribal council, but you probably also made new friends, although some stabbed you in the back. What do you take away from the whole experience?

Look, from my point of view, I'm a fan of the game.

I do understand how the outcome happened the way it did, watching it. I'm not mad, although it is a lot to take in. I've been pushing for this journey for forever.

Listen, that's just my personality, and no matter what happens to me, I'm always going to come out on top. I think that's also why they cast me because I was the first boot – which I was – and nobody wants to be first, and it's traumatic.

Let me tell you, it's kak. A blindside also – how do you take it from there? You need to carry on. You can only expect great things from me now. It's not the last you're going to see from Jason Brookstein, let me tell you that.

We live in a world where facts and fiction get blurred
In times of uncertainty you need journalism you can trust. For only R75 per month, you have access to a world of in-depth analyses, investigative journalism, top opinions and a range of features. Journalism strengthens democracy. Invest in the future today.
Subscribe to News24
Next on Channel24
EXPLAINER | This is what Survivor SA's Immunity Island is and how it works