Constructed during the coronavirus pandemic in a remote part of the Eastern Cape, the immersive tribal council area of Survivor South Africa: Immunity Island has a beautiful "driftwood kraal"-look. A set building effort that took a whole month to create, using eight tons of Wild Coast-collected driftwood.

With a brown and amber driftwood-infused look, the tribal council area where host Nico Panagio interrogates the castaways before someone's torch gets snuffed, incorporates a mystical African atmosphere that draws viewers into the tense interpersonal drama playing out between the castaways. Built on a hill overlooking the valleys surrounding the Survivor South Africa: Immunity Island location, the tribal council area is a remarkable example of just what beautiful set design a local TV production can create.

"When we started with the design of the tribal council space for Survivor SA: Immunity Island, I wanted to go a bit more organic and less structured than the previous two seasons which was very temple-like – both in the Philippines and in Samoa," explains Leroux Botha, the creative director and series director of Survivor SA. The series is in its eighth season on Thursday nights on M-Net (DStv 101).

"We wanted to go for a tribal council that felt more like a tribal village that was abandoned," says the Survivor SA mastermind at the Afrokaans production company that has been carefully steering the local adaptation of the reality competition franchise to ratings and review success over the past few years.

"After we were confirmed to film in South Africa, we decided to bring in some local elements, yet sticking to the tribal village feel. We opted for the driftwood kraal and used nondescript hut structures to serve as camera hides."

Viewers will also notice several specially-created skulls embedded into the tribal council area – and, of course, at least one hidden immunity idol necklace. "Skulls play a big part in the set, but the driftwood made the background for the tribal council area more dramatic," Leroux says.

"The use of the red colouring on the thatched huts, as well as on the firepit, and the use of the yellow and blue on some of the smaller pieces, brought pops of colour to this set. We also added a burnt-out wooden stump that is protruding from the deck section of the set."

Meanwhile, Nico's backdrop at tribal council also features the "driftwood kraal"-look with a fire bowl behind him. In addition, the voting hut features calabashes hanging from the ceiling, creating a very dramatic effect.

So, what does it take to bring all of this together, creation and construction-wise? The tribal council area's deck was constructed off-site during South Africa's Covid-19 hard lockdown period from late March 2020 to make the most of this uncertain time.

"The deck was built in sections and then moved to the location in late September 2020 when construction started in the Wild Coast," Leroux says. 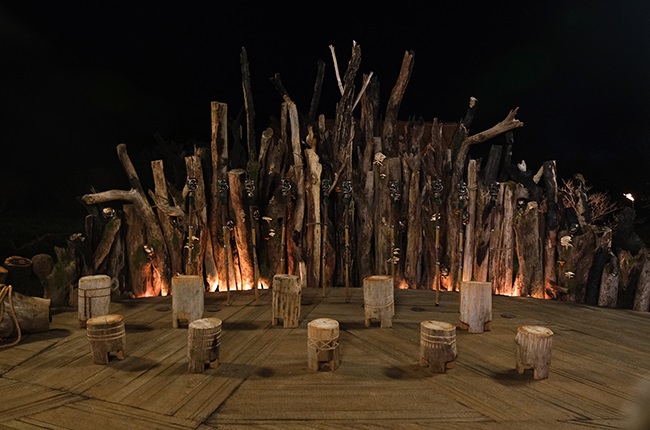 Local thatch artisans were used to help create the unique thatched roofs of the huts, and the Survivor SA art and construction team took 30 days to complete the set.

Most of the materials were sourced from local suppliers in the Eastern Cape. We live in a world where facts and fiction get blurred
In times of uncertainty you need journalism you can trust. For 14 free days, you can have access to a world of in-depth analyses, investigative journalism, top opinions and a range of features. Journalism strengthens democracy. Invest in the future today. Thereafter you will be billed R75 per month. You can cancel anytime and if you cancel within 14 days you won't be billed.
Subscribe to News24
Next on Channel24
How Survivor SA drew inspiration from sci-fi shows for this season's tribal council design