The question on everyone's lips: What was in that letter Jessica R wrote to Marc on The Bachelor SA?

High off her first one-on-one date with Marc, the 28-year-old was smitten with him.

"My highlight was being on the boat, drinking champagne and just enjoying each other's company while watching elephants and the sunset in the distance," she says about their date.

During the rose ceremony in episode four, she sneaked him a love note hoping that the other ladies didn't notice, but her eagled-eyed housemates didn't miss a beat.

Feeling like she has an unfair advantage her one-time ally Bridget called her out saying, "If you can't say it on camera then you can't say it anywhere else. It's almost like you're trying to get that extra edge over everybody."

When asked about what was in that letter the fashion designer from Cape Town plays it coy, "If I wanted everyone to know I would have said it in person. It was just a personal letter, and I would like it to remain that way."

Asked whether she was serious when she told Marc to burn it during the cocktail party, she says she was joking. 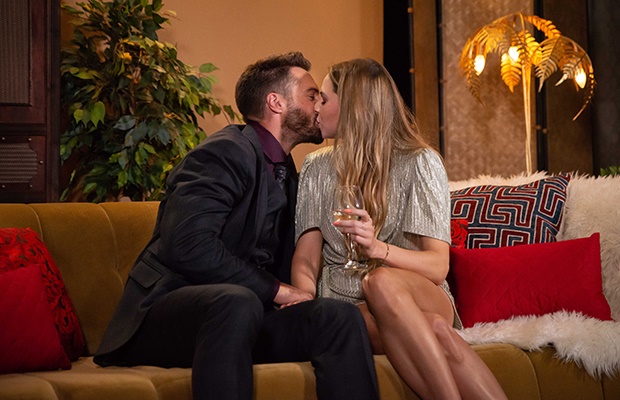 (LOVE IS IN THE AIR: Marc and Jessica R share a kiss during the cocktail party. Photo: M-Net)

About how the other women reacted to her sneaky love letter Jessica says she thinks they were feeling threatened by her connection with Marc.

"By that point, tensions were really high in the mansion, and I think the ladies were feeling threatened that by that time, I possibly had the strongest connection with him."

On how things with her and Bridget were after that tense moment she says that it didn't cause any rift.

Getting to know Marc is an extreme sport in this setting, but Jessica says she is staying true to herself.

"I know who I am and what I am looking for in a partner. It is a difficult setting because all the ladies want his attention, but I'm not someone to go out of my way for attention. I was just being myself and he saw that."

WATCH A TEASER FOR EPISODE 7 HERE:

'If I could, I would take my apology back,' Nolo spills the champagne from her last rose ceremony on 'The Bachelor SA