The predicted loss of about 100 000 jobs in the coal sector over the next decade due to the shift from fossil fuels to renewable energy has raised the spectre of ghost towns and destroyed communities, particularly in the coal-reliant province of Mpumalanga.

Although these jobs are balanced by the growth of the gas and renewable energy sector as South Africa shifts its energy mix in line with the new draft Integrated Resource Plan (IRP), the renewable energy projects are predominantly situated in the Western and Northern Cape, far from the coal belts.

The draft IRP, due to be gazetted early next year, sees the share of coal-generated electricity declining between 2020 to 2030 as coal power plants are decommissioned, while the share of renewables and gas increases. This aligns with constraints on greenhouse gas emissions imposed by our international commitment to combat global warming.

This points to the possibility of the amount of coal in the energy mix being cut even further before the new IRP is finalised. 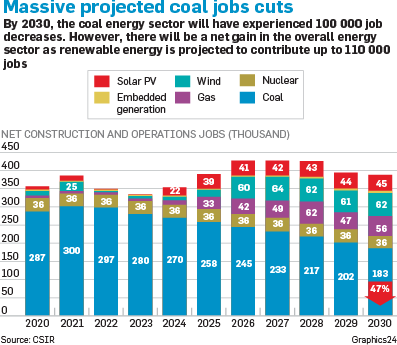 As it stands, 12 000 megawatts (12GW) of coal will be decommissioned between 2020 and 2030. Furthermore, the future of the two coal-fired independent power producer projects Thabametsi and Khanyisa, in Limpopo and Mpumalanga, respectively, looks uncertain.

International and local pressure to restrict funding for new coal-fired power plants appears to have given Standard Bank, which is one of the funders, cold feet.

Rentia van Tonder, Standard Bank’s head of power, did not want to commit to a position when questioned by City Press at Windaba, but the funding situation did not look rosy for the coal independent power producers.

Speaking at the conference, Eskom shop steward for the National Union of Mineworkers, Khangela Baloyi, said it was “clear” that jobs would be lost at Eskom and at the coal mines, as well as in transport and other sectors of the coal supply chain.

Baloyi said the union accepted this, but a “just and fair transition” was needed for workers.

He said jobs might be created in the renewable energy sector, “but are they the same quality as those in Eskom and the coal mines, and are they sustainable or just for the construction phase?”.

A further problem was that jobs would be “destroyed” in places such as the Komati or Hendrina power stations in Mpumalanga, while the jobs that were being created were in the Northern Cape.

“What are you doing to the community where you destroyed jobs? There will be ghost towns with no economic activity,” Baloyi said.

Jesse Burton, a researcher at the University of Cape Town’s Energy Research Centre, said an energy transition was already under way and was inevitable.

“We’re closing coal plants with no plan as to what to do with the workers,” she said, adding that the 2 000MW Hendrina Power Station was due to be closed next year.

Gaylor Montmasson-Clair, senior economist at Trade & Industrial Policy Strategies, said coal accounted for up to 40% of the GDP in some of Mpumalanga’s municipalities and urgent planning was needed to stop these areas from falling into ruin.

However, Montmasson-Clair said workers in the coal sector did not have to move to renewable energy jobs in far-flung provinces. Opportunities in tourism, manufacturing and agriculture should be investigated, he said.

As for funding these initiatives, he said South Africa spent up to 15% of its GDP on subsidising fossil fuels, which might be better redirected to subsidising new opportunities and industries in coal-reliant regions.

Radebe’s speech presented by Zulu touched on the issue of a just transition, saying the government had to intensify efforts to build a local manufacturing base and address unemployment in partnership with business to create internships, mentorships and entrepreneurial opportunities.

He reiterated government’s commitment to investing in renewable energy.