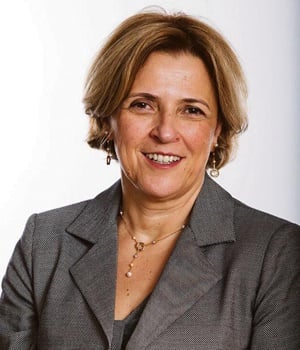 Money is, in a sense, the last thing on Maria Ramos’ mind. It’s the challenge of discovering, innovating and stretching herself – and everyone around her – that she finds the most exciting aspect of her life.

Naturally, the Barclays Africa Group gains from the extraordinary energy that spins off her, infecting her teams, spurring them on to greater heights. And yes, that’s bucks in the bank at the end of the day.

“But if we are just driven by one thing – making money – we would not survive for long because life is no longer like that,” says Ramos as we sip our cappuccinos. Hers is a double because coffee is one of her passions.

We’re in the downtown Joburg heart of this financial empire that stretches across several high-rise city blocks.

The pressures on the slim shoulders of the elegantly clad, seriously high-heeled dynamo in today’s sizzlingly competitive financial services world are huge – yet she’s warmly welcoming, relaxed and humorous.

For the next hour, conversation ranges from physics and science – helping client farmers by using drones to understand weather patterns – to “sky branches” of the bank and “who out there is disrupting our business”.

“It’s not just other banks; it’s cellphone companies; it’s small business start-ups that can do what we do cheaper and faster because they don’t have the big infrastructure and legacy that we have,” she says.

She talks about the necessity for people to move to smartphones “because there’s no longer a need for a physical bank. We’re already putting wallets and forex on cellphones and we can do it across this continent.”

But she points out that Africa needs better and faster connectivity to make such banking affordable for clients.

Ramos often uses the phrase “across this continent” during our interview. It is her horizon.

“The pace of change in Africa is probably faster than anywhere else in the world. The opportunities it creates are phenomenal, but it’s what we do with them that counts.”

She never tires of challenges – the bigger the better.

“I thrive on them, it’s part of my personality,” she says. And she welcomes a good, hard slog.

“If I’m in a tight corner, I can reach deep within myself and outwork anyone. Knowing that is a kind of security blanket,” she says in her musical, measured tone.

But intrinsically, what lights her fire is intellectual stimulation and being humble enough to learn, “knowing there’s something out there we can do differently. Then, once done, you know you can set the bar higher.”

If that sounds unbearably tough, then the only woman to head a JSE Top 40 company offsets it by candidly admitting that there are often moments when she’s nervous or anxious.

“I’m not so self-assured that I never have doubts.”

Ramos has been ranked by Fortune magazine as one of the most powerful women in international business for every year between 2004 and 2014. Her listing began in the years she led parastatal Transnet through a massive financial, cultural and operational turnaround.

Prior to that, she successfully served as director-general of National Treasury for seven years. There, she and then finance minister Trevor Manuel were responsible for the broad macro-reform of South Africa’s economy, cutting debt, subsidies and inflation, and boosting exports.

Ramos could have had her pick of top jobs when she left Treasury, but she accepted the challenge of transforming the failing, white-male-dominated Transnet.

There, she often had what she calls the “tough conversation” with colleagues she regarded as just not right for the job. She’s not the type to leave someone with nothing to do “and no purpose. Then they go home feeling disengaged and distraught. I can’t imagine anything more disheartening than that.”

When she joined Absa Bank as group CEO in 2009, she once again stepped into white-male-dominated territory. “Financial services are male dominated. It’s been hard work changing that and getting across the message that there are a lot of incredibly smart women and black professionals in this space.”

She has her critics. One suggested she carried too heavy a workload, and another was disparaging about her body language, saying it was “too positive”.

She shrugs. “If someone feels that I don’t fit some construct of what a CEO of a bank needs to look like, there’s nothing I can do about it. But if someone raises an issue about the bank’s performance, then I take it incredibly seriously.”

Ramos has spent two decades in the public eye in positions that have made her South Africa’s most recognisable face on international markets.

She worked closely with senior officials at the World Bank and the International Monetary Fund, and is today a member of the executive committee of the World Economic Forum’s International Business Council.

She served on an advisory committee of the World Bank with Lord Nicholas Stern, an expert on the economics of climate change – a subject close to her heart – as well as the Indian economist and philosopher Professor Amartya Sen and Professor Joseph Stiglitz, among others.

“I’ve been enriched and humbled by having worked with presidents Nelson Mandela and Thabo Mbeki, as well as a number of other inspiring leaders in South Africa and the world,” says Ramos.

“Today I have the privilege of working with exceedingly smart and successful businesspeople across the continent and globally. I sometimes wonder how someone like me, from nowhere, could have had such experiences.”

Ramos is one of four children in an immigrant family from Portugal, whose bricklayer father settled them near Vereeniging in Gauteng.

She and her three sisters used to walk 3km to school each day. What they lacked materially was compensated for by the strong sense of self-worth and values instilled in them by their parents.

Ramos started her working life at Barclays (now FNB), where she worked as a clerk, and lobbied for change to a male-only scholarship, which she won in 1983.

She was part of the ANC’s economic planning department and a member of the team that negotiated the finance chapter for the interim constitution.

By joining Absa in 2009, which was combined in 2013 with Barclays’ Africa operations, Ramos has come full circle to where she started.

“I’m passionate about what I do here. If I wasn’t, I couldn’t imagine doing this job; it would be too hard.”

Business tip: Be passionate about what you do. There are no short cuts.

Mentor: My mother, who instilled in me deep values, a sense of hard work and a love for reading.

Favourite book: To Explain the World by Nobel prize-winning physicist Steven Weinberg. He describes how knowledge of history has helped him understand science today.

Inspiration: Nelson Mandela, who inspired me to have courage and always to lead with humility, integrity and passion.

A life lesson: Life is an adventure. It’s about learning, stretching yourself, inspiring and being inspired.

We live in a world where facts and fiction get blurred
In times of uncertainty you need journalism you can trust. For only R75 per month, you have access to a world of in-depth analyses, investigative journalism, top opinions and a range of features. Journalism strengthens democracy. Invest in the future today.
Subscribe to News24
Related Links
Winning Women – Terry Volkwyn: Change leader
Winning Women – Simi Pillay-van Graan: Crime buster
Winning Women – Peggy-Sue Khumalo: Walking with courage
Next on City Press
CPI breaches SA Reserve Bank inflation midpoint, but experts say rates to remain unchanged