Community gains 16% of coal mine A deal to give 16% shareholding of an anthracite coal mine to rural communities in Mpumalanga is about to be sealed.

The Mpumalanga Economic Growth Agency (Mega) facilitated the shareholding deal at Nkomati Anthracite Mine, which is situated in Mpumalanga within the Nkomazi Local Municipality near Malalane.

Mega has a 33% stake in the mine and the majority shareholder is Unicorn Capital Partners.

Nkomati Anthracite Mine struggled over a number of years under Sentula Mining and had a staff complement of only 20 people in 2015.

The mine was also under pressure from communities that disrupted its operations to demand jobs and business opportunities.

When Unicorn Capital Partners came on board, the company and Mega secured a R150 million loan from the Industrial Development Corporation (IDC), which enabled the mine to expand.

Unicorn has provided roughly R230 million through a shareholder loan to develop the mine’s open-pit and underground operations.

The mine has a lifespan of 25 years, with 8.7 million tons of reserves on 400 hectares of land.

“The mine was not performing well about three years ago and Mega could not put equity. We then approached the IDC for funding,” Camane said.

He said the one condition of the IDC loan was that there must be community consultation and involvement.

Once fully operational, the mine will create 5 000 jobs, Camane said.

He said the communities of Matsamo, Lugedlane and Mawewe would get their share certificate by the end of the month.

Compared with other mines, Nkomati’s anthracite is of a particular high grade owing its low level of impurities and high level of fixed carbon (up to 86% and more).

Nkomati is one of few South African anthracite mines that produce coal and meet the requirements for the ferrous metals industry.

Despite these positive developments, the communities seem to be dissatisfied as operations were temporarily stopped this week following threats of a march.

Communities delivered a memorandum demanding roads and other infrastructure that fall within the competence of government.

Chief Sizwe Ngomane is alleged to have called for the mine to shut.

Ngomane was not available to comment and did not respond to a text message about the matter.

Related Links
Life was better before the mine opened: Hard times hit mining villages
The gold mine on the corner: How to grow a township business
Mine workers go from being jobless to owning a colliery
Share
Next on City Press
Race to rescue WTO draws eight nominees from Mexico to Moldova 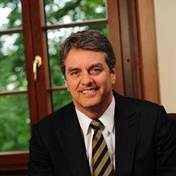 Read more on:
mpumalangacoal mining
MONEY MAKEOVER
Podcast | Mistakes to avoid with your own business