Light at the end of the tunnel for thousands of former mine workers, who contracted lung-related diseases, as class action gets the go-ahead

Tshiamiso is a Setswana word meaning “to make good” or “to correct”.

And this is what thousands of former mine workers, who contracted lung-related diseases underground, hope they will get from a settlement with the country’s mining giants.

It was almost seven years ago when a class action was instituted against 32 mining companies that once formed the backbone of the country’s economy.

But, in the end, six of the major companies agreed to pump R5 billion into paying the workers who contracted silicosis and tuberculosis from working in the mines.

After several years of negotiating – and many more years for the sufferers of the diseases and their dependants – there is now at least some light at the end of the tunnel. 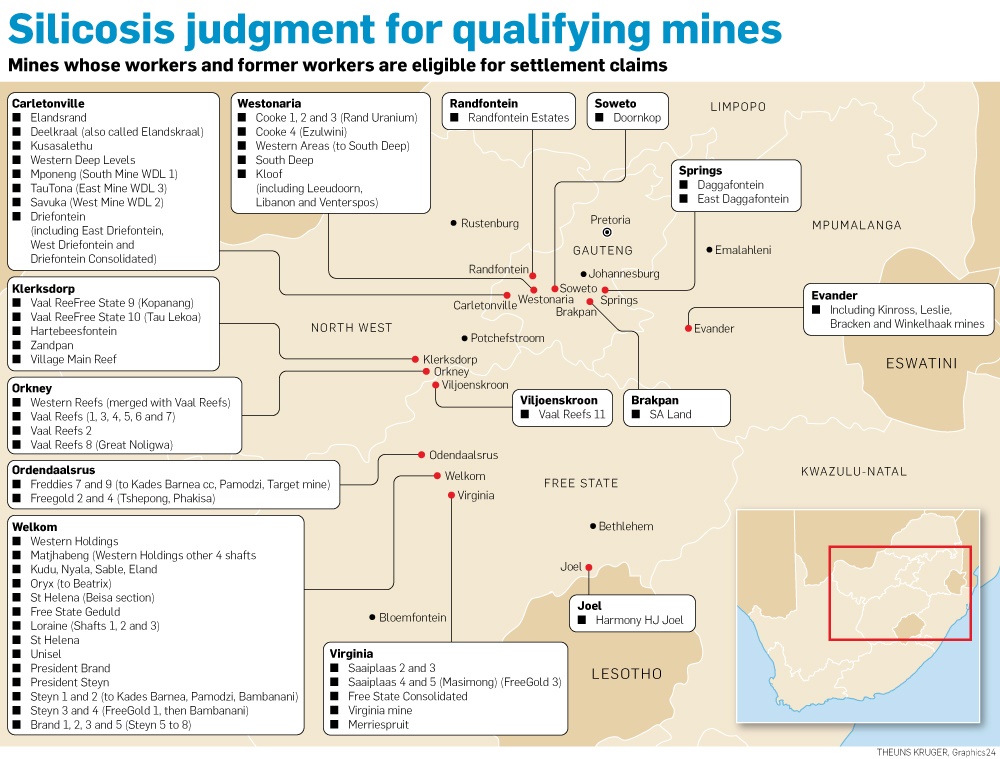 The Tshiamiso Trust is expected to make good on thousands of claims from former mine workers from across the southern African region.

Late last month the Johannesburg High Court finally gave the thumbs up to the long-awaited 300-page negotiated class action settlement agreement, the first of its type in the country.

The six companies have – as part of the deal – agreed not to put the money upfront but rather as bank guarantees worth the R5 billion to be used when it is needed.

There are 10 classes of claimants.

The level of liabilities among the companies differs.

According to the trust, Sibanye-Stillwater bears more than a quarter of the liability at 27.44%, Harmony will contribute 21.66%, Anglo American’s South African business’ liability is 20.72%, AngloGold Ashanti’s is 16.95%, Goldfields’ is 7.15% and African Rainbow Minerals’ liability is 6.08%.

The companies are expected to contribute R1.4 billion for the first two years of benefit payments and after that annually when the trust notifies them.

The four law firms involved – Richard Spoor, Abrahams Kiewitz, Motley Rice and Hausfeld – will be paid R355 million for legal fees; the Legal Resources Centre will be paid a once-off amount of R15 millionfor its costs.

Events leading up to the settlement

Michael Murray, the trustee of Tshiamiso, said the R5 billion was not the maximum amount because there might be further claims against the companies.

“Beyond the R5 billion guaranteed, the companies might still remain liable,” Murray said.

He said there was a formula of proportionality that would be used to calculate a mine’s liability.

This would be used to determine costs in instances when there were more claims against one company than another.

“It is not based on the size of the company but on its historic association with employees who would have worked in the mines for which they had accepted responsibility,” he said.

Murray pointed out that although 32 companies were involved, they fell broadly into nine groups of companies and six of those were signatories to the settlement.

They have opted out of the agreement and are appealing certain sections, including that TB should be excluded because it is airborne and the causal link to the occupation might not be clear.

But not everyone is happy with the settlement.

The National Union of Mineworkers (NUM) which, as the oldest mining union, was said to be very helpful in sourcing former mine workers, said that although it welcomed the settlement it was concerned about those companies that had opted out of the deal.

NUM compensation officer Adam Letshele said: “We still contest that not being involved in the board poses a huge risk in the management of the trust because we would not be involved in high-level decision-making.

Letshele said that the benefits were unfair because a sufferer could claim only once, meaning that a TB sufferer could not claim again even if the TB deteriorated.

He said because of possible fraud issues the Tshiamiso Trust had determined that sufferers would have to undergo new medical examinations.

But the union doubted the trust had enough capacity to reach local sufferers and especially those in neighbouring countries who had worked in the mines.

When the High Court rubber-stamped the agreement a fortnight ago, several former mine workers from the platinum sector protested that the settlement did not include them.

However, Murray said the action was for silicosis, which was caused by silica dust, a by-product of gold mining, and did not include any other sector.

The NUM believes the settlement is not inclusive. And it says that, if a mine worker’s condition deteriorates, he should be able a claim again. Do you think the agreement is fair?

SMS us on 35697 using the keyword MINE and tell us what you think. Please include your name and province. SMSes cost R1.50. By participating, you agree to receive occasional marketing material

Related Links
Book extract: The legal battle against the mining houses
What are the widows and children entitled to?
‘Pay me in my lifetime’
Share
Next on City Press
The economics of gender during the Covid-19 pandemic