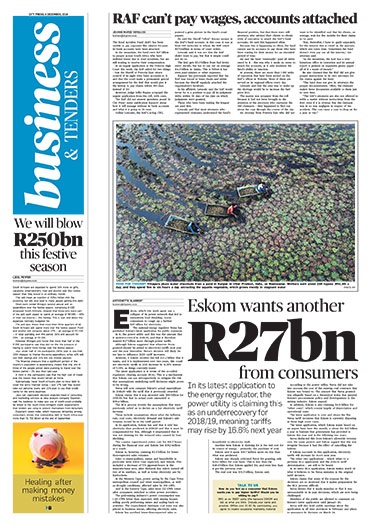 A taste of what you can expect in City Press Business this week:

Eskom wants another R27bn from consumers

Eskom, which this week again saw a collapse of its power network that led to nationwide load shedding, wants consumers to cough up a further R27 billion for electricity.

The Road Accident Fund (RAF) has been unable to pay expenses like salaries because its bank accounts have been attached.

In the meantime, the fund owes R17 billion to people across South Africa who have suffered losses due to road accidents, but are still waiting to receive their compensation.

Dividends earned over the past 20 years total about 10 times the amount NGOs originally invested to establish Ditikeni.

We will blow R250bn this festive season

South Africans are expected to spend 24% more on gifts, vacations, entertainment, food and alcohol over this festive season than they would in an ordinary month.

This will mean an injection of R254 million into the economy, but will also lead to many people getting into debt.

There’s one reform measure that government can implement without getting the masses out on the streets in protest. It is also guaranteed to deliver benefits for the majority of South Africans.

The Government Employees’ Pension Fund has registered growth, but poor returns on investments – which it’s blaming on SA’s ailing economy

Transformation is slow at mining houses

While top management remains predominantly white and male, mining houses are battling to share the burden of community development.