As Namibia struggles to emerge from a period of economic stagnation, China is on standby to provide some sort of relief through investments – mostly in China’s favour.

China is particularly investing in Namibia’s mining industry, which is one of the biggest contributors to the country’s GDP (14% last year).

In November, Rio Tinto announced that it had agreed to sell its 68.62% majority stake in the Rössing uranium mine to the China National Uranium Corporation for $106.5 million (R1.5 billion).

When the deal is finalised, China will become the single biggest owner of Namibia’s uranium resources as China National Uranium Corporation also holds 25% in the Langer Heinrich uranium mine, alongside Australia’s Paladin Energy.

Then there is Swakop Uranium, which is a Namibia-China partnership of which 10% is held by the Namibian state-owned Epangelo Mining Company and 90% by Taurus Minerals, jointly owned by China General Nuclear Power Group and China-Africa Development Fund.

Since 2015, a number of China-aided projects have been completed or are still being undertaken in Namibia. The projects cover areas including infrastructure, agriculture, education and healthcare, and are funded with a total of R2.8 billion in grants or concessional loans provided by China.

As is the case with many countries in sub-Saharan Africa, Namibia’s infrastructural development benefited largely from Chinese investments.

Most recently, China has again shown interest in further exploring other areas such as the agriculture and automobile sectors for possible investment worth R10 billion.

However, experts worry that China’s interest in Namibia does not necessarily grow the economy nor create additional jobs.

The director of the Economic Association of Namibia, Klaus Schade, said that the takeover of existing businesses did nothing more than retain the size of the economy. The world's most unequal economies

“If takeovers result in capturing more of the local value chain, they will reduce the space for local businesses,” Schade said.

Senior economics lecturer at the University of Namibia, Omu Kakujaha-Matundu, said that, to deploy the proceeds from Chinese investments in a sustainable way, Namibia should focus on benefiting from its natural resources.

“No matter how small the proceeds from our natural resources are, they should be reinvested in other productive assets, such as the development of the agricultural sector and other serious infrastructure that will benefit Namibia now and in future.

“Should it be used for luxuries and consumption, as has been the case in Namibia and elsewhere in Africa, we are doomed,” he stressed.

Chinese investments in Namibia have been criticised on various platforms, ranging from taxation, banking issues, labour practices and environmental concerns.

Kakujaha-Matundu said that, while Chinese infiltration was a challenge, there was a great growth opportunity for Namibia and Africa as a whole.

“The question is not about philosophising on whether we face Chinese colonisation or not,” Kakujaha-Matundu said, “but how Africa can turn this challenge into an opportunity.”

Schade said that Namibia needed greenfield investment, particularly in the manufacturing and services industries, because this type of investment can open up additional domestic business opportunities and create further jobs.

“Social and environmental standards need to be enforced and ensured. Infrastructure investment financed through loans have to be economically viable and result in returns that help fund the repayment of the loan and interest,” he said.

“Investment should be used to develop local capacities and knowledge further through involvement of local partners, as well as training and mentorship of local employees and businesses,” Schade said.

Adding to Schade’s point, Eloise du Plessis, the head of research at PSG Konsult Namibia, said China needed to play by the same rules as any other foreign investor, and that policies such as the Investment Promotion Act and the New Equitable Economic Empowerment Framework needed a serious overhaul to make Namibia an attractive investment destination for all investors.

“Some of the previous investments China made in Africa were very one-sided, with China requiring government guarantees. The outcome of these arrangements are the negative reports you hear about,” said Du Plessis.

“However, there has recently been talk of a change in approach from China when they invest in Africa. It is up to African countries to make sure this isn’t merely lip service, to not get drowned in Chinese debt and to be transparent.

“Countries have to make sure that foreign direct investment contributes to the their wellbeing. It actually needs to be investment and not simply debt funding that eventually leads to the loss of core assets and the destruction of local business,” she added.

“The biggest problem, in my opinion, that makes these investments go the wrong way, is corruption. The moment individuals stand to gain from ‘deals’, it skews the foreign direct investment away from the best projects and funding arrangements for the country, and skews it to arrangements that benefit a handful of individuals.” 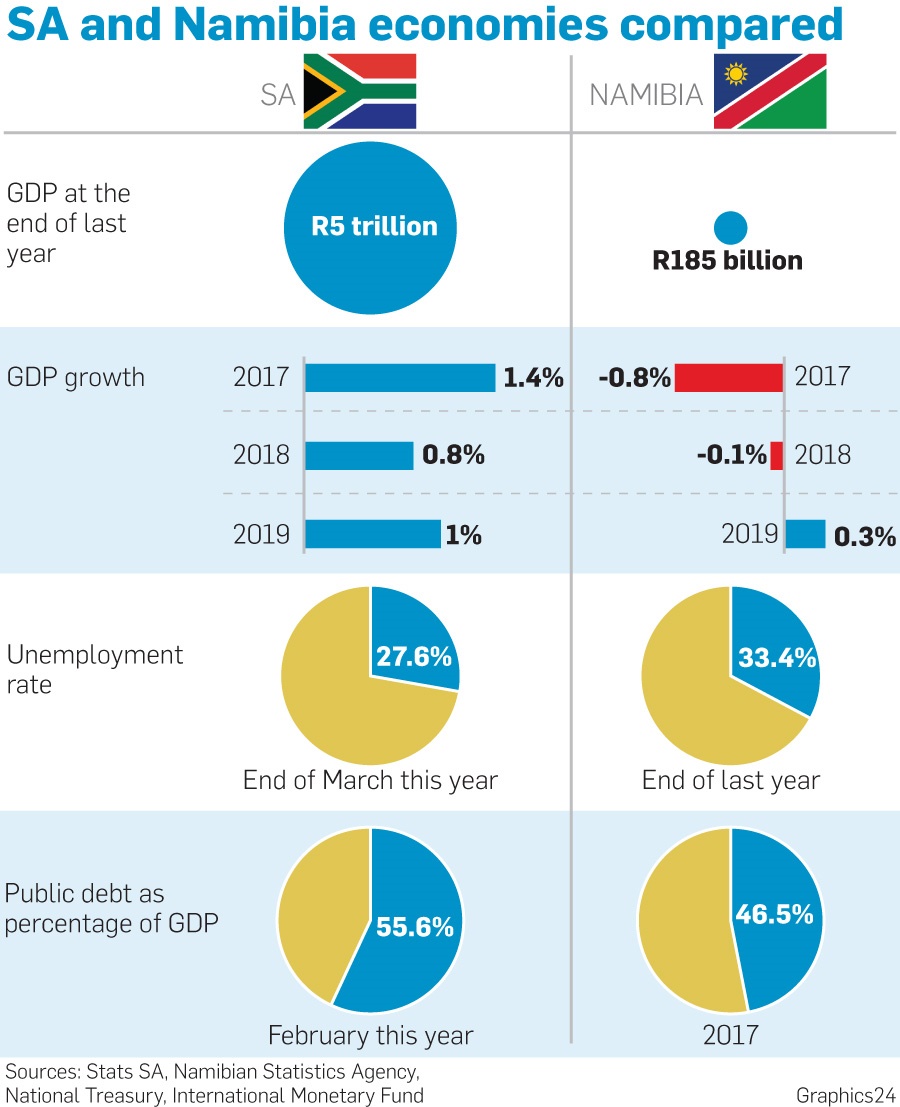 OTHER FOREIGN INVESTMENTS IN NAMIBIA

Last month, Anglo American reached an agreement with the government to invest about 7 billion Namibian dollars (R7.043 billion) in a new ship to mine for diamonds off the coast of Namibia, while the sale of Erindi Private Game Reserve has reached the final stage after Mexican business tycoon Alberto Baillères opted to buy it.

The reserve has been on the market at a price of 2 billion Namibian dollars for the past five years.

The Namibian government strongly encourages investments in all its major sectors, including agriculture, mining, manufacturing, services and tourism, and there are a number of investment opportunities in all these sectors.

A key focus is the Trans-Kalahari Railway, which will offer a major alternative transport route to transatlantic markets, increase regional integration and economic growth for three countries in the Southern African Development Community, and better distribute traffic among southern African corridors.

These investments are happening amid a Namibian economy that is projected to grow by 0.3% this year and 1.9% next year, according to the latest Namibia Statistics Agency’s preliminary estimates, which is a recovery from contractions of 0.1% seen last year and 0.8% in 2017.

Risks to the domestic economic outlook include the persistently low uranium price and drought.

Related Links
Huawei exudes calm confidence as US ban hits home
China, US spar over tech in trade talks
Trump’s trade wars have given fresh purpose to Brics bloc
Share
Next on City Press
Gender equality is an achievable reality, not improbable ideology