The gold mine on the corner: How to grow a township business The so-called township economy is a potential gold mine and could generate prosperity and jobs from within. Thuletho Zwane investigates how communities could be the solution

Imbizo Shisanyama is at the corner of Main and September streets in Ebony Park, Tembisa, a township in Midrand, north of Johannesburg.

Next to the shisa nyama are service provision stores that were once four-room residential houses.

Across from the shisa nyama, a new shopping centre is being built.

“We don’t know what’s going on there,” says Rita Zwane, the owner of Imbizo Shisanyama.

“We live here. We work here. But when these new corporates come and build malls here, we are the last to know. We can’t even build shopping centres in our own neighbourhoods because we don’t own the land or have access to funding. Where am I going to get R800 million to build my own shopping centre?”

Imbizo Shisanyama, popularly known as Busy Corner, was established in 1997.

Zwane cashed in her provident fund of R5 000 and bought a single pot, a gas griller, a display fridge and a gas-paraffin stove.

Since then, she has entered the taxi and trucking businesses. It was difficult, she says, shaking her head.

The taxi industry is not for everyone.

Zwane founded and is managing director of Mgobane Investment Group. She also owns a number of properties across the country.

For Zwane, the township economy is greatly undervalued. She says opportunities in townships are often offered to international franchises and well-known brands before the effect on local businesses is considered.

Read: ‘We can’t compete on prices’

Earlier this month, she took part in a workshop that discussed the development of a policy and regulatory framework for township economic development.

The first workshop took place on May 15 and the second will take place in Kliptown, Soweto, on Friday.

The workshops are a partnership between the Gauteng provincial government, the SA Research Chair in Cities, Law and Environmental Sustainability at North-West University and the SA Cities Network, which produces research on urban development and city management.

The aim is to bring government practitioners, sector experts, academics and township entrepreneurs together to find a way to get beyond the challenges that hold back development.

These workshops provide targeted research and insights from key stakeholders and focus on developing a framework that provides measurable township economic development.

The framework would look at the ecosystems that drive township economies and provide possible solutions to create new zones of opportunity.

“When we speak about the township economy, we tend to focus on the informal economy. This is good and well. This is also where I started. However, the future of the township economy lies in creating value chains; providing infrastructure for township businesses; and finding creative ways to link stokvel money – as yet unregulated – to the possible establishment of a township development bank. In this way, we will create our own channels of accessing finance,” says Zwane.

A study by the World Bank, titled Economics of South African Townships, states that many township enterprises are undercapitalised and struggle to access external finance.

It says access to finance was the single biggest obstacle to growing businesses.

This point is further emphasised in the Gauteng Township Economy Revitalisation Strategy, which states that the provincial government needs to ensure that appropriate finance and funding instruments are available for township businesses. 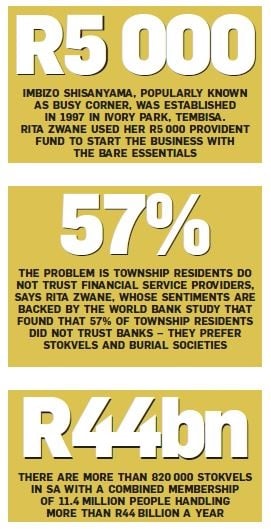 The strategy says: “Government will prioritise significant re-capitalisation of the Gauteng Enterprise Propeller, the funding model of which grants loans. At the same time, government will need to consider the creation of a state-owned bank at provincial level, which will help fund the township economy.”

Jak Koseff, chief director at the Gauteng office of the premier, had this to say about the establishment of a township development bank: “We’ve been on this road before. It is a politically popular notion. The question is, who are the depositors and will the bank be only for commercial purposes? Do we need a bank? I am of the view that there are financial instruments already available that can be used instead.”

Koseff says the creation of cooperative banks, cooperative insurance and the development of new funding vehicles could be key to providing finance to township enterprises.

These were more favoured than stokvels and burial societies, which face many internal and external challenges, such as organisational management skills, lack of legal status and exploitation by commercial service providers.

Cooperative banks are made possible by the Cooperative Bank Act of 2007; and cooperative insurance by the Treasury, including proposals to provide special dispensation for cooperative burial societies to enter the world of formal micro-insurance.

In his study – From Consumers to Investors: An investigation into the character and nature of Stokvels in South Africa’s urban, periurban and rural centres using a phenomenological approach – Rudzani Mulaudzi estimated that there were more than 820 000 stokvels in the country with a combined membership of 11.4 million people handling more than R44 billion a year.

Mulaudzi’s research of 36 stokvels revealed that the majority of members were not aware of how the money they generated could be invested or put to better use.

Read: Geared for growth: Why your stokvel needs to be more than a deposit box

“Financial education of stokvel members is essential to increase awareness of how better investment and management of the money could result in bigger benefits to members,” says Mulaudzi.

“Members need to be made aware of the power of investing as stokvels, the power of collaboration as a whole, and the effect that small, medium and micro enterprises could have in their communities with their help.”

The workshop on the development of a policy and regulatory framework for township economic development was set against this backdrop.

Geci Karuri-Sebina, associate at the SA Cities Network, says: “Various programmes have been developed towards the revitalisation of townships – all with varying levels of success. However, the challenges facing townships persist.”

Karuri-Sebina says many townships might possess the potential to become good economic nodes, but not enough research has been put into studying townships to understand the real nature of their opportunities and challenges.

This is obstructing the implementation of relevant policy to guide the redevelopment of townships.

“In 2015, the network – with government’s economic development department – held a roundtable that gathered all the major stakeholders necessary for determining the existing researchers and research done on township economies as a basis to support policy and planning efforts,” says Karuri-Sebina.

“A decision from the roundtable was that a compendium of research done on township economic transformation was to be produced to support and direct ongoing research about township economic development. However, this was not actualised.”

We live in a world where facts and fiction get blurred
In times of uncertainty you need journalism you can trust. For only R75 per month, you have access to a world of in-depth analyses, investigative journalism, top opinions and a range of features. Journalism strengthens democracy. Invest in the future today.
Subscribe to News24
Related Links
Meet the entrepreneurs solving the biggest headache for spaza shops
Consumers shift to spazas
Local spaza owners warn of chaos
Next on City Press
Consumers feel the pinch as inflation hits expected 5% mark