Successful women leaders have these 5 attributes in common

Leadership experts list five key attributes that are often demonstrated by successful, professional women – and the good news is that these are skills any woman can develop, they believe.

Whether they are CEOs, scientists, entrepreneurs or venture capitalists, successful women often share a few key characteristics that are worth taking note of.

1. They are experts in communication

“Communication is a foundational leadership skill,” says Sue von Hirschfeld, a leadership development expert and co-convenor of the Developing Women in Leadership programme at the UCT Graduate School of Business.

“With that goes networking, negotiating and collaboration. Often listening is more important than talking.” The official portrait of former US first lady Michelle Obama.

Michelle Obama is often lauded as a woman leader with exemplary communications skills, not only because she is a great orator and able to rally people to a cause, but because she delivers her speeches with passion and integrity and illustrates them with highly relatable personal stories to help anchor the message. Effective communication is not just about being clear and persuasive; it’s also about being open, available to others and interested in what they have to contribute.

A good leader needs to have insight into her own strengths, weaknesses, values and goals as this is instrumental in defining who we want to be and where we want to go.

“This kind of work is often called ‘identity work’ and it is really important for women to grapple with because they face so many contradictory expectations at home, as partners and then at the workplace too,” says Von Hirschfeld.

“Many women need time and space to explore what kind of leader they want to be.” 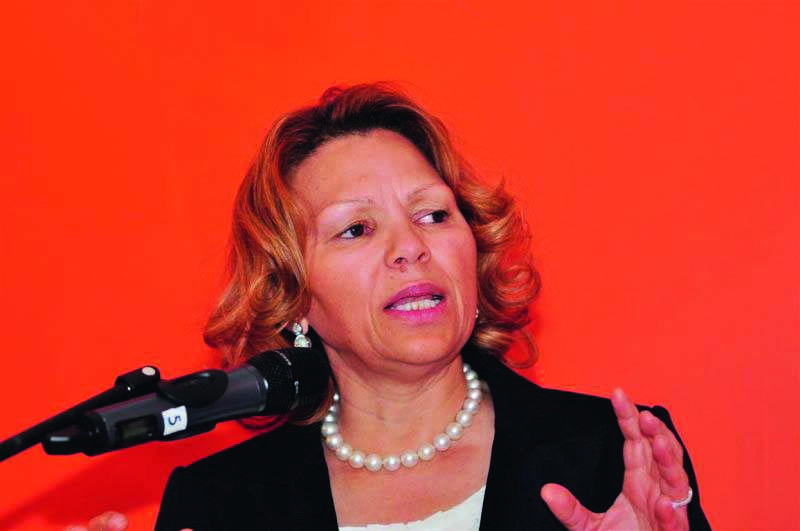 According to an article published in the Harvard Business Review, the process of seeing oneself as a leader – and being seen by others as one – is complicated and happens when a leadership identity is internalised and combined with a sense of purpose. A good example of this is Smile Telecoms CEO Irene Charnley, now one of the wealthiest women in South Africa. Charnley grew up on the Cape Flats and was extremely aware that her identity and values were shaped by the people around her.

“Growing up in Apartheid South Africa, examples of bravery, heroism and inspirational humanity were all around me. Some of my heroes were personal; ordinary people working quietly to overcome injustice and keep their dignity, while trying to escape poverty,” she says.

“My heroes shaped the value system that defines who I am today – values such as equality and equity, diversity and inclusivity, freedom and responsibility, hope and faith for the future.”

3. They use their power – wisely

With self-awareness comes the ability to draw on your personal strengths, to have the influence and impact you want to have as a leader. This is an incredibly powerful experience and one that Dr Makgathi Mokwena, a personal development expert, believes every woman is able to achieve.

“My work often has the primary intention of reconnecting individuals with themselves, with their dream and with the inner energy necessary to pursue and achieve that dream.”

Comedy legend Carol Burnett said: “Only I can change my life, no one can do it for me.” She was the first woman to host a variety show on television and The Carol Burnett show was an enormous hit, airing for 11 seasons and earning 70 awards, even though the male bosses in the TV industry thought it would never work. She discovered she had a knack for acting one day when she made people laugh.

“All of a sudden, after so much coldness and emptiness in my life, I knew the sensation of all that warmth wrapping around me,” Burnett recalled.

“I had always been a quiet, shy, sad sort of girl and then everything changed for me.” She never looked back.

4. They believe in themselves …

Closely linked to confidence and determination is the need for self-belief – believing in yourself and what you are doing will give you confidence when others question and doubt you.

Bridgette Radebe may be married to Energy Minister Jeff Radebe and is the sister of billionaire Patrice Motsepe, but she started out as a simple miner and was turned away from university because she was black. Undeterred, she then went on to defy legislation and started her own mining company Mmakau, making a success of it in an industry dominated by men. She says that for much of her life she was driven by the desire to prove those who did not believe in her wrong. Bridgette Radebe and her husband, Minister in the Presidency Jeff Radebe, on the red carpet at the State of the Nation Address (SONA) 2018 in Parliament on February 16, 2018 in Cape Town. Picture: Edrea du Toit/Netwerk24/Gallo Images

Kenyan business sensation, Njeri Rionge agrees that moving forward steadily and deliberately is key to success at the top. “Being in business is like learning to ride a bike or drive a car. You need only believe in yourself, trust your gut feeling and develop a clear plan or strategy. Keep it simple and implement that plan step by step with courage, conviction and love above all. Ultimately be open minded and flexible to change course when needed and listen to your customers.”

Both Radebe and Rionge demonstrate resilience. An ability to keep going no matter what, to find solutions to obstacles and problems and think up alternative strategies is an important attribute for women in leadership, especially because they often have to work harder than men to succeed. A recent survey by the Global Network for Advancement Management showed it is a worldwide presumption that a mother should bear more than 50% of childcare. Studies also show that many companies and organisations have unconscious biases towards women, which means people are often not aware that they are choosing a man over a woman to lead a project.

Sibongile Sambo was turned down as a flight attendant for SAA because she was too short. She failed her first year at university and was told to pursue nursing or teaching, neither of which appealed to her. But she was not discouraged and eventually founded her own aviation company, SRS Aviation, the first black female-owned aviation business in South Africa.

“To be honest, I never thought about losing,” says Sambo, “For me it was the beginning of a winning game,” she says about starting the business.

“I was fired up by passion and by seeing my dream becoming reality.”

We can draw on the wisdom and success of women like Sambo and others. Women can improve their chances of success by building the skills that will help them to stand out.

“As women, we need to advocate for change, take steps to develop our skills and support each other. We need to be the change we want to see in the workplace,” believes Dr Mokwena. And we are never too old to learn. This April, Higher Education Minister Naledi Pandor, obtained a PhD from the University of Pretoria – a dream she had put on hold since graduating decades earlier to find a job to support her younger siblings. Pandor said while it was difficult to fit her studies in with her work schedule and family life, she kept going as she believes in continuous learning.

Related Links
Can we explain the pay inequality in South Africa?
25 years later South African women still battle for equality
We are voting in the past – the future is female
Share
Next on City Press
Businesses must prepare for future disruptions