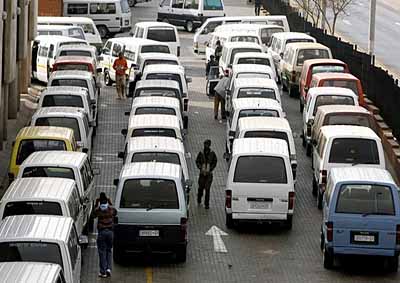 <b>ROLE REVERSAL:</b> A disgruntled passenger has shot a taxi driver five times for not stopping to let him off.

Three men have been arrested in connection with a spate of rapes by an alleged gang travelling in a Quantum minibus around Johannesburg.

Gauteng Community Safety MEC Sizakele Nkosi-Malobane and the National Taxi Alliance revealed today that a minibus and suspects had been identified.

The breakthrough in the case came after a woman was raped for four hours in the back seat of a taxi in full view of her 10-year-old son on Saturday.

More women have come forward since the public outcry, and have reported similar incidents of sexual assaults by taxi drivers.

Nkosi-Malobane said the rape survivors had been taken to a centre and were receiving medical and psychological attention.

The South African National Taxi Council denied claims that the men who were accused of raping and robbing women in taxis were a part of the taxi industry.

Meanwhile, the Economic Freedom Fighters condemned the attacks and called for background checks on taxi drivers.

The Democratic Alliance also condemned the assault and said it would submit Parliamentary questions to Police Minister Nathi Nhleko to find out how many similar incidents had been reported in each province across the country.

They also wanted all taxis operating on the road to be registered with an association and to be clearly marked with which association they belong to.

Transport Minister Dipuo Peters has condemned the spate of sexual assaults and said that the owners of any taxis being used by the perpetrators would be dealt with harshly if it emerged that they were registered operators.

“This office cannot confirm any arrests, but there is a team that has been established to investigate the cases. Several leads are being followed to arrest the perpetrators,” Dlamini told News24.

He said that police were investigating more than five cases of armed robbery and the rapes of women who had boarded white and grey minibus taxis.

We live in a world where facts and fiction get blurred
In times of uncertainty you need journalism you can trust. For only R75 per month, you have access to a world of in-depth analyses, investigative journalism, top opinions and a range of features. Journalism strengthens democracy. Invest in the future today.
Subscribe to News24
Related Links
Taxi driver held for rape of passenger
Teen accuses Indian taxi driver of rape
Next on City Press
‘R9m irregularly paid to Nsfas administrator and advisers’