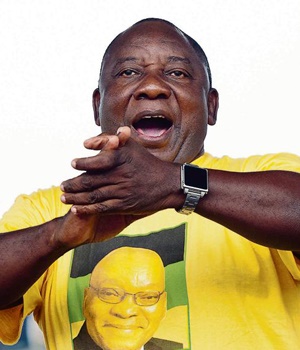 1 As a nonexecutive director of Lonmin, Ramaphosa sent emails to Lonmin personnel, then minister of police Nathi Mthethwa and former minister of mineral resources Susan Shabangu about the strike and how it should be stopped.

“They are plainly dastardly criminal and must be characterised as such ... there needs to be concomitant action to address this situation,” read one of his emails.

The lawyers for the miners argued that the emails in effect, encouraged “concomitant action” to deal with the miners – which led to the deaths on August 16.

But Farlam said there was no basis to find even on a prima facie basis that Ramaphosa was guilty of murder.

The police’s case was that they had a plan and there was no prior intention to implement the so-called tactical option on August 16, but that it became unavoidable because of an escalation in violence during the course of the morning.

But Farlam has found the decision to launch phase 3 of the plan was taken by former North West provincial commissioner Zukiswa Mbombo before or during a meeting of the NMF on August 15.

Farlam also found police had lied. “The leadership of the police, on the highest level, appears to have taken the decision not to give the true version of how it came about that the ‘tactical option’ was implemented and to conceal the fact that the plan to be implemented was hastily put together without POP [public order police]inputs or evaluation,” reads the report.

He found there was “at least a prima facie case” that National Police Commissioner Riah Phiyega and Mbombo approved an SA Police Service (SAPS) presentation, which contained incorrect facts.

Farlam said officers who fired at scene 1 had reason to believe they were facing an imminent attack. But there were indications that some might well have exceeded the bounds of self or private defence, in which case there was at least a prima facie case that they were guilty of attempted murder.

3 The provincial commissioner of the North West testified that she knew Ramaphosa had called Mthethwa, but claimed the call did not influence her decision making. Farlam noted that the explanation was unconvincing.

He also agreed with evidence leaders that she was unable to provide a coherent and compelling explanation for the sentiments she expressed and testified under cross-examination.

He found a meeting between Mbombo and the Lonmin management resulted in the decision that August 16 was to be “D-Day”, when the strikers either voluntarily laid down their arms and left the koppie, or were forced to do so as a result of police action.

Farlam said it was common cause that the decision was not taken by the tactical commanders on the ground. Mbombo’s decision was later “endorsed” by the SAPS leadership at an “extraordinary session” of the NMF held after its ordinary meeting on the evening of August 15.

The report stated Mbombo foresaw there was a high risk of bloodshed if her decision was to be implemented and it became clear early on that the voluntary disarmament of the Association of Mineworkers and Construction Union Joseph Mathunjwa had overconfidently predicted, was not going to happen.

There was numerous evidence indicating that police commanders, namely Mbombo, Major General William Mpembe, Major General Charl Annandale and Brigadier Adriaan Calitz must have known before the shootings at scene 2 commenced that live ammunition had been fired at scene 1 and some strikers had been killed or seriously injured.

“Thursday, 16 August, was to be D-Day. That decision, for which Mbombo and those present at the extraordinary session of the NMF on 15 August 2012 must accept responsibility, was the decisive cause of the 34 deaths on 16 August,” reads the report.

Farlam recommended steps be taken in terms of section 9 of the SAPS Act to enquire into their fitness to remain in teir posts and whether they were guilty of misconduct in trying to mislead the commission.

4 Farlam said while the strikers claimed they first took up arms to protect themselves against attack by the National Union of Mineworkers, this was a version the commission found to be untrue. The strikers had not placed any evidence before the commission to explain why they found it necessary to resort to violence to achieve any of their aims.

Farlam noted the gratuitous violence of the attacks upon the deceased security officers and Lonmin employees had to be as distressing to their families as to the families of the miners killed on August 13 and 16 in encounters with the police.

The report stated that the use of arms and of violence by the strikers was an important contributory fact to the situation developing as it did. It alerted the police to the type of criminal acts they were required to deal with and precipitated a police presence in addition to public order policing.

It was also an indication of the lengths the strikers were prepared to go to, to enforce their demands.

5 Phiyega gave an undertaking that the SAPS would cooperate fully with the commission. But the SAPS team proved dishonest and hid a few pertinent documents, recordings and minutes of meetings.

The report stated Mbombo’s plan to remove the stikers was “endorsed” by the SAPS leadership, including Phiyega, on August 15.

While Phiyega claimed to be unable to remember most of what was discussed, she testified she thought the plan a good one and that the tragic outcome, which was not intended, was the result of the “disruption? of the plan. (The disruption which she refers to is the fact that the strikers started leaving the area where they were while razor wire was being uncoiled and some of them advanced towards the police, giving rise to the belief on the part of the police that they were going to attack them).

But this overlooks the fact that the plan provided for possible attacks on POP members, which would be repulsed by tactical response team members, 60 of them, using R5 rifles, which is what happened.

An inaccurate set of minutes for one of the meetings was prepared and a number of SAPS witnesses testified before the commission in support of the incorrect version. There was at least a prima facie case that Phiyega knew the SAPS presentation contained the incorrect facts.

6 While Ramaphosa was cleared of wrongdoing, Lonmin did not escape Farlam’s wrath.

According to the commission, Lonmin did not:

. Use the intelligence available to detect the dangers of urging non-striking workers to report for work;

. Properly formulate plans for dealing with the strikers; and

. Ensure there was adequate security resources at its disposal.

In addition, Lonmin’s failure to build suitable housing for its employees – only three of the 5 500 promised housing units materialised in 10 years – became a source of “tension” among mine workers.

The commission recommended that the department of mineral resources take steps against Lonmin and force the company to fulfil its obligations on houses for rental and family units.

While the commission said it was aware of calls for Lonmin to bear the costs of civil litigation, it said it was “not satisfied that its terms of reference are wide enough to cover the question as to whether a compensation scheme of the kind proposed should be implemented by the state”.

Meanwhile, the injured mine workers and relatives of those who died are likely to lodge a civil lawsuit against Lonmin.

Nomzamo Zondo, director of litigation at the Socio-Economic Rights Institute of SA which is representing them, said although they were still studying the findings, a civil lawsuit was likely to be the next course of action. – Additional reporting by Xolani Mbanjwa

We live in a world where facts and fiction get blurred
In times of uncertainty you need journalism you can trust. For 14 free days, you can have access to a world of in-depth analyses, investigative journalism, top opinions and a range of features. Journalism strengthens democracy. Invest in the future today. Thereafter you will be billed R75 per month. You can cancel anytime and if you cancel within 14 days you won't be billed.
Subscribe to News24
Related Links
Where does Marikana report leave Ramaphosa?
Next on City Press
Marikana workers plan to put Ramaphosa in the dock in a civil claim