I was too soft on Zuma – Thuli Madonsela 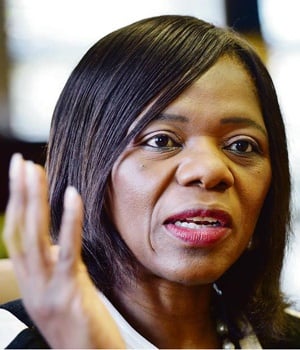 Public Protector Thuli Madonsela says she was “soft” on President Jacob Zuma when compiling her report on the R246 million spent on upgrades to the president’s private home in Nkandla.

“I made that decision that he benefited unduly. In fact, that was a softer wording,” she said in a hard-hitting interview yesterday.

“I should have said he benefited improperly and unlawfully. That’s the wording already in the Public Protector Act and the Executive Members’ Ethics Act. I can’t change that and it stands as it stands.”

Police Minister Nathi Nhleko’s report released on Thursday, in which he responded to Madonsela’s findings on Nkandla, is by no means the final word on the matter, with opposition parties and civil society railing against it.

The DA will take its first step in its fightback against the report on Tuesday, when leader Mmusi Maimane will ask the National Assembly not to consider it and instead declare it “illegitimate and irrelevant”.

The party has advanced towards what appears to be a looming court battle by obtaining a legal opinion from its lawyers this weekend, which found that Nhleko’s report was “unconstitutional and invalid, for want of rationality”.

The DA’s lawyers will present their advice in a letter, which City Press has seen, to Nhleko and National Assembly Speaker Baleka Mbete tomorrow.

Meanwhile, Madonsela has insisted that she will not back down in her fight to hold President Zuma to account, saying she would only relent if he paid back some of the R246 million spent or a court told her she was wrong.

She also said she wanted the Constitutional Court or the Supreme Court of Appeal to intervene in the matter and “sort out” the mess.

Madonsela slammed Nhleko’s report, saying it was filled with “half-truths, inaccuracies and distortions”.

But she said she was reluctant to take the matter to the Constitutional Court herself and asked: “Where are the people of South Africa?

“The Constitution gives me the power to investigate, to report and take appropriate remedial action. I have authority to take whatever action I can deem fit and that includes me going to court and asking for the court to force them to do something.

“But if I go to court, I become me as a crusader without a sword ... and asking the courts to use their sword to sort out this thing.

“The president must pay. I have already said that,” she said.

She insisted that Nhleko’s report had no constitutional standing “because the Constitution is clear who the actors are when it comes to oversight. The minister is not part of the oversight loop.”

Madonsela warned that substituting her findings by appointing someone to “override” them could spell disaster for other chapter 9 institutions.

Madonsela said she was “surprised” to discover that Nhleko was publicly releasing his report, because she had not been informed about it. She was also shocked that Finance Minister Nhlanhla Nene had played no role in Nhleko’s report despite her recommending in her report that both ministers “assist” Zuma in determining how much he should repay the state.

Madonsela also scoffed at Nhleko’s use of videos to demonstrate the need for a “fire pool” as a security feature, saying President Zuma had admitted to her, during her own investigation, that he had asked for the kraal to be built and, if need be, he would reimburse the state.

Meanwhile, the letter the DA’s lawyers will send to Mbete and Nhleko on Monday says the “factual basis” of Nhleko’s report is incorrect, and that it was also biased because a minister cannot substitute his own conclusions for those of the Public Protector.

Nhleko’s spokesperson, Musa Zondi, dismissed the DA’s legal opinion as a “standard line when opposition does not like something”.

“The minister did his job and now this is back in the hands of Parliament’s ad hoc committee. The minister has done his job,” he reiterated.

For the record: City Press reported Madonsela saying she wished she had found Zuma had benefited improperly and unlawfully from the security upgrades, instead of finding he had benefited unduly from them. Madonsela has denied that was what she meant, saying the exact words she used were: “I have made the decision that he benefited unduly. In fact, that was a softer wording. Had I used the wording in the act, I should have said he benefited improperly and unlawfully. That’s the wording already in the act, in the Public Protector Act and the Executive [Member’s] Ethics Act.”