The mystery of Cabinet reshuffles 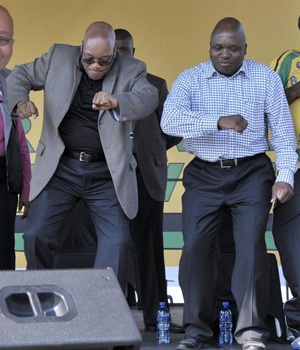 The political grapevine, which has been awash with talk of a Cabinet reshuffle for months, went into overdrive this weekend, with seemingly authoritative reports that one was on the cards in a few days’ time.

The reports were deemed more than just mere speculation because they appeared on the front page of Gupta-owned The New Age newspaper. It has been claimed in the past that many big government decisions, including the deployment of ministers and bureaucrats, are concluded over breyani and lamb roti at the Guptas’ compound in Johannesburg. This week’s reports claimed the reshuffle would affect the economic cluster and would see the promotion of some deputies.

Speculation aside, what is not in doubt is that a reshuffle is imminent. While President Zuma is in any case compelled to replace Collins Chabane, the talk predates the late public service minister’s death in the middle of March. According to predictions, some big names will fall when Zuma announces the shake-up.

President Zuma loyalists punt his willingness to make changes – he reshuffled his Cabinet four times in his first term – as proof of his firm leadership and willingness to act against nonperforming ministers. His detractors, however, say it is a sign of indecisiveness and weak Cabinet-making skills.

Both sides have a point. During his presidency, Thabo Mbeki remained religiously faithful to his ministers, regardless of their performance or how prone to scandal they were. A joke during that time was that you had to die in order to be dropped from Cabinet.

Zuma’s Cabinet reshuffles have been hard to read. During the announcements – which last a few minutes and during which he does not take questions – Zuma always states that the reshuffle is intended to strengthen the work of government. But the result hardly ever matches the intention, as duds replace duds or effective people make way for weaklings.

The other oddity is that when he reshuffles, Zuma makes wholesale changes that do not auger well for continuity and stability of governance. In his first reshuffle, the number of ministers and deputies who were chopped and changed was an incredible nine. In subsequent reshuffles – in 2011, 2012 and 2013 – four to five ministers and roughly the same number of deputies were affected.

Each time, a sense of why the axings, promotions and shifts were made was lacking. Even party officials and presidential aides could not provide convincing insights into Zuma’s thinking.

The mystery of Zuma’s revamp of his cabinets has led to the conclusion that they are done to balance his political power bases. It has led to speculation – inside and outside the party – that those who were dropped had fallen out of favour with Zuma and the inner circle that helps him draw up the Cabinet. A promotion would obviously mean that your star is on the up. But in the Zuma era, it has come to be read as a deployment to a portfolio where favoured business interests can benefit or that you are required to provide cover for the president on a sensitive matter.

ANC insiders say the imminent reshuffle has been much harder for Zuma to pull off as he leads a hugely divided ANC leadership core. Now quickly settling into the lame-duck years – he has just two and half years left of his ANC term – his ability to get his own way has been greatly reduced. His situation is complicated by the fact that members of his Top Six are all positioning themselves to take over from him or to move up a notch from their current posts. They are therefore said to be pushing for the elevation of those they believe will back their power bids.

This fractious set-up is replicated in the National Working Committee, the next structure in the hierarchy. Provincial power politics are also at play, with those seeking higher national office also putting in a good word for those they believe will work to boost their prospects at the 2017 party conference.

Zuma may also use the reshuffle to dispel any notion of him being a lame-duck president and send a message to the pretenders to the throne that he is still very much alive and in charge.

So when the president makes his five-minute announcement in the not so distant future, it will not be a report card on individuals. The announcement will give the South African public a guide to the political lay of the land, a sense of which way the power sands are shifting. And beneath all that, a guide to which politically connected commercial interests will be served by whom.