A bleak picture painted for SA education in past five years

A new report has painted a “regressive” picture of South Africa’s education system in the past five years.

The 53-page report by Equal Education Law Centre (EELC), a public interest law advocacy centre, highlights regression in the government funding meant for pupils to access textbooks and reading material in schools, the shambolic scholar transport programme and the provision of classrooms and toilets.

In addition, the report made damning findings that undocumented migrant pupils and children with disabilities were being excluded by the system and advised of better ways to roll out the introduction of early childhood development (ECD) in schools.

The law centre works closely with lobby group Equal Education (EE), which has already called for Basic Education Minister Angie Motshekga’s performance contract to be made public to hold her accountable.

Rubeena Parker, the centre’s senior researcher, said they hoped that the report would assist Motshekga to overcome shortcomings of her department in the past decade and ensure these were not repeated.

“When President Cyril Ramaphosa announced his new Cabinet last month, he noted that in order to give effect to the clear mandate of this administration, a ‘capable, efficient and ethical government’ was needed. After two terms in the role of basic education minister, Motshekga has to ensure that the shortcomings of her department in the last 10 years are not repeated. This includes, among other things, ensuring her department and provincial ministers prioritise, plan and spend education budgets effectively so that targets are not missed and reduced.

“In doing so, she must ensure that targets are set according to the requirements and timelines set out in law, for instance, in the norms and standards for public school infrastructure,” Parker said. 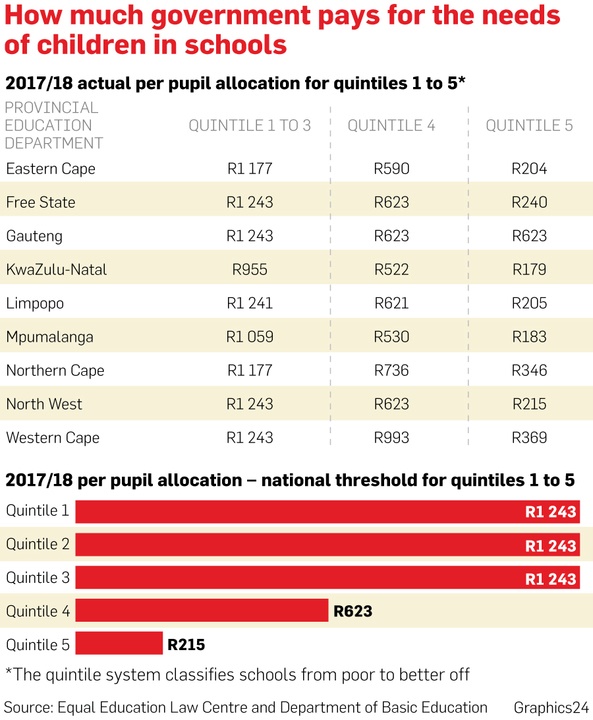 How much government pays for the needs of children in schools

She said Motshekga must facilitate effective inter-departmental and intersectoral cooperation and coordination, close legislative and policy gaps, and eradicate all implementation barriers.

The report has not been shared with Motshekga’s department or National Treasury, key departments mentioned in its recommendations, because it had not been finalised when Ramaphosa announced his new Cabinet last month.

Various parliamentary portfolio committees have not yet resumed meetings after last month’s national and provincial elections.

However, Parker said the report was publicly available and they hoped to engage with the government and National Treasury directly as part of their ongoing advocacy.

The report recommends, among others, that:

• Funding must keep pace with inflation;

• Motshekga’s department, along with National Treasury, must conduct updated research into the causes, true extent and real effects of the decline in funding for pupils;

• Funding should be increased, and any additional funds should be ring-fenced for specific education outcome interventions, for example, to improve reading or mathematics;

• Provincial education departments such as KwaZulu-Natal, Mpumalanga and Eastern Cape must prioritise allocation for funding pupils at no-fee schools so that national minimum thresholds for all quintiles are met;

• Undocumented pupils must be systematically included in national development plans, education plans and budget and monitoring systems so that the issues can be prioritised; and

• A directive was made to Motshekga to issue an immediate instruction to schools outlining the obligations of schools to admit and retain undocumented pupils, and confirming that all migrant, refugee and asylum-seeking children have access to education regardless of their immigration status.

Motshekga’s department and National Treasury had not responded to a request for comment about the report by the time of writing.

We live in a world where facts and fiction get blurred
In times of uncertainty you need journalism you can trust. For only R75 per month, you have access to a world of in-depth analyses, investigative journalism, top opinions and a range of features. Journalism strengthens democracy. Invest in the future today.
Subscribe to News24
Related Links
Let’s mark our teachers
No toilets at school because government didn’t pay the bill
No toilets or classrooms, but here’s a kitchen
Next on City Press
Is there a place for police in the future of South Africa?