The office of the Auditor-General is poised to have the legal authority to issue certificates of debt to recoup billions of mismanaged public funds from public offices and officials.

"Try to change your ways. If you don’t, we will hit you."

This was the message from Auditor-General Kimi Makwetu to government bosses – from directors-general, superintendents-general and chief executive officers to municipal managers and chief financial officers – who preside over 430 national and provincial government departments, state-owned entities and municipalities.

Makwetu spoke to City Press on Thursday after he released the audit outcomes for national and provincial departments, as well as some state-owned companies, for the 2017/18 financial year.

His report painted a dire picture of the mismanagement of public funds, with public servants racking up R51 billion in irregular expenditure, R2.5 billion in fruitless and wasteful expenditure and R2.1 billion in unauthorised expenditure in the past financial year alone. The report came as Makwetu prepares to release this year’s audit outcomes for municipalities, which he is expected to sign off by the end of the month.

The municipal report should have been out by now, but Makwetu says it has been delayed by threats to his staff and bitter contestations of his audit findings.

One of his auditors was shot last month at a guesthouse in Vanderbijlpark, where she was staying while auditing the books of Emfuleni Local Municipality in Gauteng.

Another auditor had his car tyres slashed while parked outside a government department.

Makwetu declined to reveal further details of the incidents, except to say many of his staff faced threats while auditing municipal books and that he was most concerned for their safety.

“We want to push on. We try to scrutinise to make sure that public funds are disbursed towards achieving service delivery. That comes with a risk, but this is necessary. Only disgruntled people think we are targeting them,” he said.

According to Makwetu, at least 40 audits of government entities could not be finalised in the 2017/18 financial year because some of their finances were in shambles and others contested his findings.

With the amended Public Audit Act signed into law by President Cyril Ramaphosa last week, Makwetu says accounting officers will now need to exercise better oversight of their financials or face consequences where unjustifiable irregular expenditure and material findings are made during audits.

Makwetu said being influenced or pressurised by political leaders to defy the regulations of the Public Finance Management Act will no longer cut it as an excuse because the act gives specific responsibilities to accounting officers and they will “need to raise the red flags if they keep being told what to do”.

He says there needs to be a conversation about how to deal with allegations of interference by the executive in these entities.

He said the current commissions of inquiry under way were shedding light on such matters, and everyone now knows what is expected of them.

The new act will give Makwetu the power to issue a certificate of debt to accounting officers responsible for flouting audit regulations resulting in the misuse of public funds.

But this will happen only after he sends the certificate of debt to the executive authority – premiers, MECs and mayors – to institute recovery processes, using state institutions.

Accounting officers who resign amid investigations will no longer escape unchallenged because their cases will follow them.

Makwetu said his office will set up an advisory committee consisting of independent auditors to afford those wishing to contest his certificates of debt and his office an opportunity to test his decision. 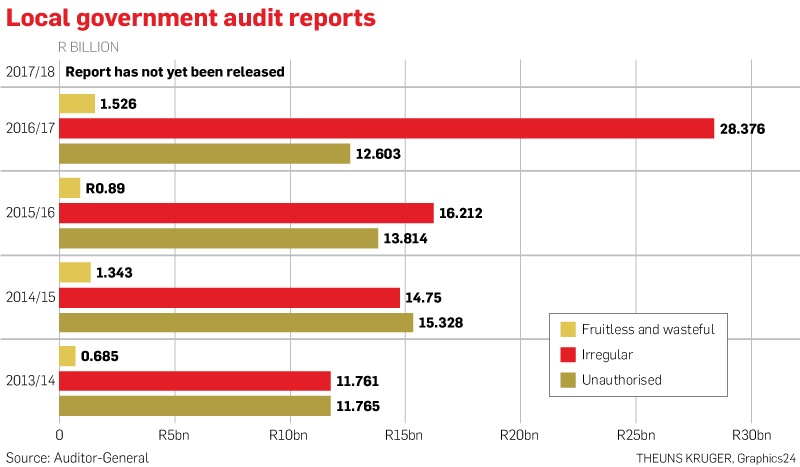 The new act will, however, not be retrospective, meaning that it will not apply to those already found to have been responsible for having wasted and misspent money, only to those found to have done so in the future.

Although it has not yet been decided when the new law will come into effect, Makwetu said he planned to have this “done with necessary urgency”.

He said the act would not only make the bad officials face the consequences, but would also allow his office to “interrogate where the fault lines are”.

His office would also be able to recommend the removal of underqualified officials.

Makwetu hopes that the act will discourage officials from flouting proper financial processes like they do now.

Although he would not be drawn on the worst examples of audited contracts or entities, Makwetu did say the North West and Free State provinces were the only ones with disclaimers and adverse opinions.

His report found that the North West office of the premier, previously occupied by the recently departed Supra Mahumapelo, was among those auditees from which his office experienced “the most pushback during the audit process in the past two years, which contributed to the late finalisation of its audit in the current year”.

The report also found that the provincial public accounts committee and portfolio committees in North West did not fulfil their role as assurance providers because they didn’t follow up properly and track resolutions, and therefore had no positive impact on the audit outcomes.

In the Free State, his report found that the “province’s political and administrative leadership yet again exhibited no response to improve accountability for government spending”. Makwetu’s office has continuously recommended that fundamental principles for accountability be implemented, including proper planning, execution and supervision of internal controls as well as effecting consequences for poor performance.

But none of them has been implemented despite political leadership committing every year to doing so.

The Free State premier’s office, which was until recently occupied by ANC secretary-general Ace Magashule, was also among those departments whose audit regressed from a qualified opinion to a disclaimer.

“The deteriorating audit outcomes could be attributed to the leadership’s continued disregard for internal controls and the monitoring thereof.

“The provincial audit outcomes will continue to deteriorate if the right tone is not set at the top,” Makwetu’s report found.

“A culture of no consequences has been created through the leadership’s involvement in the decision making that led to transgressions.

“The continued disregard for procurement processes by the leadership that resulted in irregular expenditure, coupled with limited consequences for the transgressions, created an environment vulnerable to misappropriation, wastage and the abuse of state funds.”

Why do you think it is impossible to end irregular expenditure at municipal and provincial level? What sanctions/punishment should be meted out to offenders?

SMS us on 35697 using the keyword AUDITOR and tell us what you think. Include your name and province. SMSes cost R1.50. By participating, you agree to receive occasional marketing material

We live in a world where facts and fiction get blurred
In times of uncertainty you need journalism you can trust. For 14 free days, you can have access to a world of in-depth analyses, investigative journalism, top opinions and a range of features. Journalism strengthens democracy. Invest in the future today. Thereafter you will be billed R75 per month. You can cancel anytime and if you cancel within 14 days you won't be billed.
Subscribe to News24
Related Links
Lack of accountability is why North West, Free State have poor audits: AG
The secret to a clean audit in a province with R13.5bn irregular expenditure
Local government in South Africa is in crisis. How it can be fixed
Next on City Press
‘If I have to die for justice to prevail, so be it,’ says Senzo murder accused’s sister